Decisions loom in Asia ahead of next championship cycle

SEOUL, SOUTH KOREA (AP) – One is definitely staying on. One is already gone. One among the maybes doesn’t want to talk about his immediate football future while he’s on vacation.

The six teams from Asia are home after the continent’s most successful World Cup group stage ever.

Three Asian teams reached the second round, although none went further. With the Asian Cup taking place in January 2024, resolving the status of the head coaches is an immediate priority for most federations.

Five of Asia’s six representatives in Qatar had long-serving coaches in charge but only one is certain to stay.

Herve Renard signed a contract extension in May to remain in charge of Saudi Arabia until 2027. After the Green Falcons’ shocking 2-1 upset of Argentina, and coming close to a place in the last 16, Renard is safe in the Saudi job. 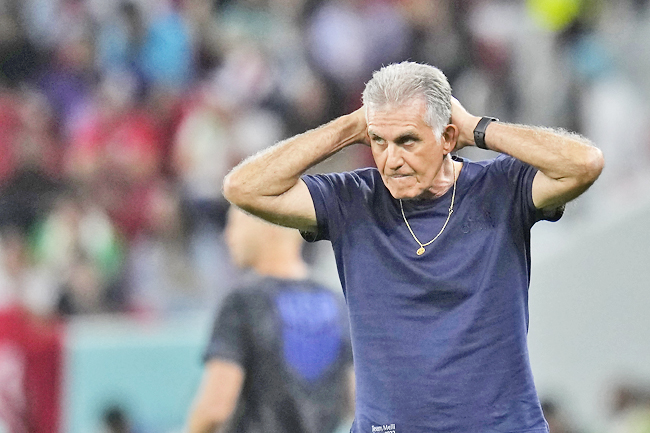 There is also only one definitely departing. Paulo Bento leaves Seoul after more than four years in charge of South Korea’s national team.

He took the team to the second round after a last-minute win over his native Portugal in the last game of Group H, but his tenure ended with a 4-1 loss to Brazil.

“Although we were eliminated in the Round of 16, we still stuck to our style of play against a powerful team,” said Bento, who added that he’d decided in September to move on after Qatar.

“I will always be connected with South Korea, both in terms of my career and my personal life.”

The domestic football debate has already moved to whether the next head coach will be a Korean or a foreigner.

For the other four coaches who guided Asian teams at the World Cup, decision time is looming – be that for the coach or the federation.

Graham Arnold led Australia into the Round of 16 before a narrow 2-1 loss to Argentina.

Arnold took the job in 2018 and while Football Federation Australia (FFA) has indicated its satisfaction with his performance during a disrupted qualifying stage and at the tournament, he is yet to decide if he’ll continue.

“I haven’t thought about the future,” he said. “My contract is up and I just want to go away, have a holiday, have a break and see what happens.”

The FFA said it’s happy to give Arnold time and space to think about his future.

Japan beat Germany and Spain to top its group and progress to the knockout stage of the World Cup for the fourth time, a record for an Asian team. The Samurai Blue was disappointed not to reach the last eight for the first time, however, losing in a penalty shootout to Croatia.

Coach Hajime Moriyasu, appointed in 2018, confounded critics who thought he was too conservative to guide the team to great success.

It is expected that the 54-year-old Moriyasu will continue after he told reporters Tokyo that he wants to stay in the job.

In Iran Carlos Queiroz, appointed in August, may also stay.

Iran beat Wales but could not get a point against the United States in the last Group B game to advance to the knockout stages.

“Now we have to think about supporting the technical staff and Queiroz and think about the players and their spirit,” Iran’s Minister of Sports and Youth Hamid Sajjadi said after the national team returned home. “Queiroz should be able to plan for the next Nations Cup with peace of mind, and we will do whatever we can to help.”

The worst performing of the Asian teams in Qatar was the host nation. Felix Sanchez was the longest serving coach of the six, taking the reins at Qatar in 2017, but he recorded three losses on home soil.

“Our goal is very clear, we will have a generational shift,” Sanchez said. “Some players will leave, others will come.”

It already seems to be happening. On Monday evening, the Qatar Football Association named a new-look roster for the regional Gulf Cup in January with Bruno Pinheiro, a former coach of Qatar’s youth teams, in charge.