Crispy on the outside and fluffy in the middle

THE WASHINGTON POST – I have a confession: I haven’t eaten very many hush puppies in my life up until now. I come from a cornbread family, and the few times I’ve had hush puppies at restaurants weren’t memorable. But after frying a few batches to develop a recipe for these cornmeal fritters, I’ve come to realise just how sublime they can be.

The slightly sweet cornmeal batter, lightly spiced with black pepper and studded with sliced scallions (some cooks add onions, corn or peppers instead) are a delicious delight. But the true mark of a great hush puppy is its texture – a crisp exterior that yields to a soft, fluffy center – and this recipe produces exactly that.

A staple of Southern and soul food cuisines, hush puppies are typically found on plates of barbecue and fried seafood. There are lots of myths around how the name came to be.

(Perhaps most pervasive being that the fritters were used to quiet barking dogs.)
Robert Moss in Serious Eats found that the term predates the food item, and that the fritters went by other names in various parts of the country. “At least two decades before ‘hushpuppy’ appeared in print, South Carolinians were enjoying what they called ‘red horse bread,'” he writes. “Red horse was one of the common species of fish (along with bream, catfish, and trout) that were caught in South Carolina rivers and served at fish frys along the banks.”

A specialty of Romeo Govan, an African American man born into slavery, “That red horse bread, one newspaper captured, was made by ‘simply mixing cornmeal with water, salt, and egg, and dropped by spoonfuls in the hot lard in which fish have been fried,'” Moss writes. 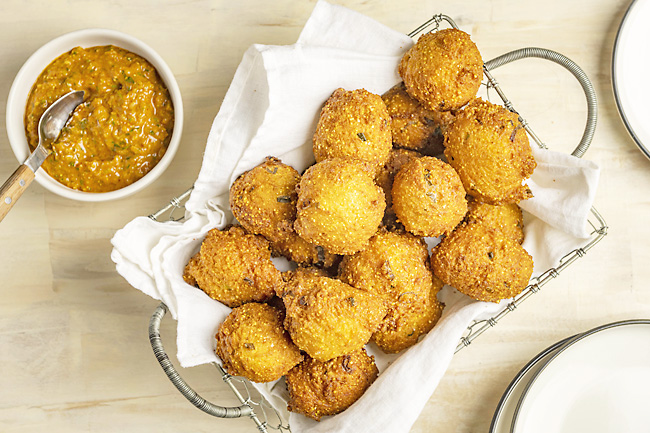 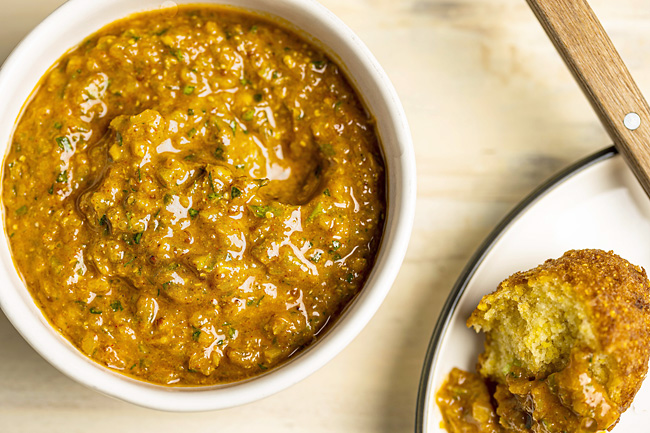 “Besides ‘red horse bread,’ Southerners had several of other names for what we now call hushpuppies, like ‘wampus’ in Florida, and ‘red devils’ and ‘three finger bread’ in Georgia.” Whatever you call them, they are delicious.

This recipe starts with a mix of cornmeal and all-purpose flour. I experimented with different ratios and found that I preferred the texture that resulted from equal parts of each.

Washington Post recipes editor Ann Maloney favoured a 3-to-1 ratio of cornmeal to flour for the extra corn flavor it gave the hushpuppies, so I listed it as a variation in the recipe below should you feel the same.

The batter is seasoned with ground black pepper for extra flavor – but you can make it your own by adding other spices, such as cayenne or paprika – and buttermilk gives the hush puppies a nice tang.

A word of caution: Do not overmix the batter – it can lead to dense, tough hush puppies.

Also important is the brief rest period, which allows time for the cornmeal to hydrate and any gluten to relax a bit, leading to moister, more tender fritters. Then it’s time to fry! I made golf ball-size hush puppies, but you can form them into different shapes and sizes, as desired, just note that the fry time may differ.

Last but not least, while they are great on their own, condiments – such as a spicy remoulade sauce or honey butter – make these hush puppies even more irresistible.

Hush puppies are a classic accompaniment to plates of barbecue and fried seafood in the South, but are a welcome pairing with foods of any type in any region.

The best versions of these deep-fried cornmeal fritters boast a crisp exterior that yield to a soft, fluffy interior. This recipe instructs you to make golf ball-size hush puppies, but you can form them into different shapes and sizes, as desired. Note that the fry time may differ depending on the size.

Storage Notes: Refrigerate leftovers for up to four days.

In a separate medium bowl or large measuring cup, whisk the buttermilk, butter and egg until thoroughly combined.

Add the buttermilk mixture to the cornmeal mixture and stir until just combined, then stir in the scallion. Let the batter rest for 10 to 15 minutes.

Meanwhile, add enough oil to a medium or large heavy-bottomed pot to come 1 1/2 inches up the sides and set it over medium-high heat.

Heat until a deep-fry or instant-read thermometer registers 350 degrees. (You can also check the temperature of the oil by dropping a small dollop of the batter into the oil. It should immediately start bubbling and turn golden.)

Place a wire rack over a large, rimmed baking sheet or line a tray with paper towels and set it near your work area.

Use a medium cookie scoop to drop golf ball-size rounds (about two tablespoons each) of the batter into the oil, about six at a time so as to not overcrowd the pan and cause the temperature of the oil to drop too much. (You can use two spoons if you do not have a cookie scoop.)

Fry, occasionally turning the hush puppies with a spider or slotted spoon and adjusting the heat as needed so that the oil stays around 350 degrees, until nicely browned all over, three to four minutes.

Transfer the hush puppies to the prepared pan and sprinkle with salt, if desired.
Repeat with the remaining batter.

Serve hot with remoulade sauce or honey butter for dipping, if desired.

This spicy and tart remoulade is similar to the one served at Brigtsen’s Restaurant in New Orleans. If you prefer a milder sauce, reduce the horseradish and hot sauce.

Refrigerate for up to 5 days.

In a food processor, combine the celery, scallions, parsley and garlic, and pulse until finely chopped.

Scrape down the sides and bottom of the processor bowl, if necessary.

With the machine running, add the oil in a thin stream until fully incorporated.

Transfer to a lidded container and refrigerate until ready to use.