In August, the Consumer Price Index (CPI) increased by 0.6 per cent compared to July. This was driven by the increase in food and non-alcoholic beverages index; and non-food index by 0.4 per cent and 0.6 per cent.

As compared to August 2021, the CPI had increased by 4.5 per cent. The rise in the CPI was contributed by the increase in food and non-alcoholic beverages; and non-food prices by seven per cent and 3.9 per cent respectively.

The increase in the non-food component was driven by miscellaneous goods and services 13.7 per cent; transport 5.9 per cent; and restaurants and hotels 3.2 per cent.

The CPI is a measure of price changes of goods and services paid by the consumer in a specified period and compiled on a monthly basis. The list of goods and services in the CPI is based on the average expenditure per household from the Household Expenditure Survey (HES). The CPI full report for August is available from the Department of Economic Planning and Statistics website at https://deps.mofe.gov.bn. 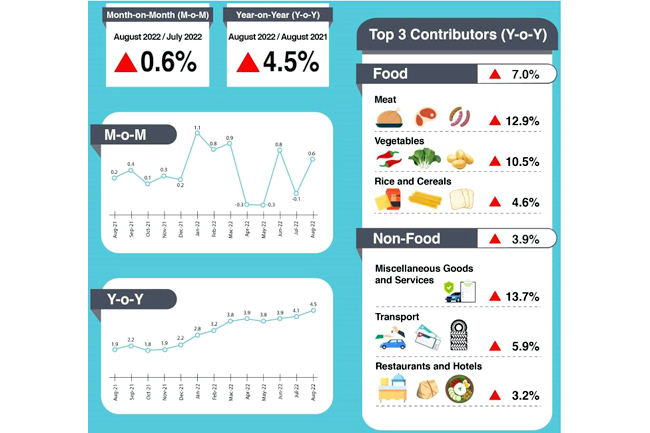