DUNEDIN (AFP) – Ireland coach Andy Farrell said yesterday “not over-playing the emotional card” will be essential if they are to beat New Zealand in the second Test and send the three-match series to a decider.

Farrell wants to see how his team respond to having their backs against the wall after going down 42-19 in last week’s first Test in Auckland, which followed the midweek team’s heavy defeat to the Maori All Blacks in the tour opener.

He said he can sense a desperation within his side heading into today’s second Test in Dunedin, regarding it as a chance to prove they are better than they offered at Eden Park.

Meanwhile the carrot of a first ever test win over the All Blacks on New Zealand soil is dangling again before them.

However, Farrell said any departure from their game plan will only play into the hands of a home side who fed ruthlessly off mistakes in the first Test, most notably during a four-try flurry in the second quarter to propel themselves 28-5 clear.

“We’ll see whether we’ve got the stomach for the pressure that’s going to be on us,” Farrell said. 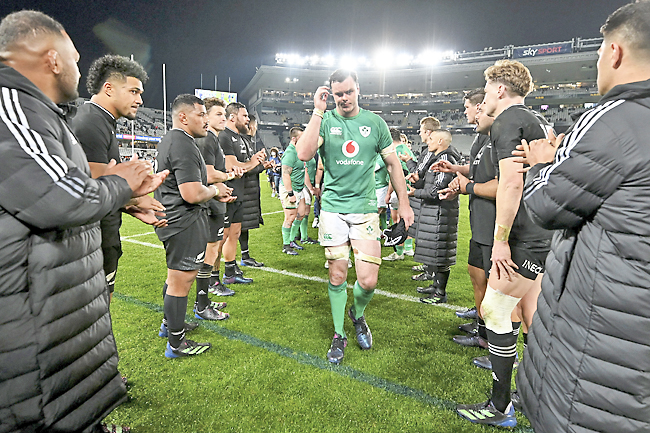 “To be composed enough to play the game that we want to play, and do it better than last week, is absolutely key. Not over-playing the emotional card is important but at the same time, when you get an opportunity in a game like this, you’ve got to take it.”

Farrell is demanding improvement in Ireland’s set piece work and the breakdown, the latter an aspect he has sought clarity on with South African referee Jaco Peyper, having been confused by how Englishman Karl Dickson controlled the collisions in the first Test.

If they can at least gain parity there, Farrell believes his side can make history if they improve their finishing.

The tourists enjoyed considerably more possession and territory than New Zealand but bombed no fewer than five try-scoring opportunities.

“We had plenty of opportunities to score but making sure when you get your moments, you take them, is obviously crucial,” he said.

“We had some good periods and built and built, and all of a sudden we’d lose a couple of moments. And then you miss one (tackle) and you’re under your sticks again.”

The most concerning statistic for New Zealand in Auckland was having to make more than 200 tackles.

Coach Ian Foster said he wanted his team to have a better grasp on possession, with turnovers likely to be more difficult to achieve in the “perfect” conditions created by playing under the roof at Forsyth Barr Stadium.

Foster expects a fast game, possibly surpassing last week when a total of nine tries were scored and neither team attempted a penalty shot at goal.