NDTV – A cobra was seen emerging with its hood spread wide from behind the door of a house, in a video that is gaining traction on the Internet. Moments later, the snake, which looks alert, tries to attack the person filming it.

The video amassed more than 30,000 views on Twitter and drew a number of reactions.

Many seemed terrified by the aggressive reptile hidden in the doorway.

“I would simply have a heart attack and be done,” a user wrote.

Some came up with quite a few questions.

“That’s huge? Were they able to get him out? Assuming that’s in India or possibly South Africa or Australia? Yikes!” a comment read.

One suggested that a cobra for security was a bit too much. “And, all I got was a ring doorbell!”

One sarcastically wrote, “Oh my! He should be charged with trespass, but I don’t want to argue with him.”

Earlier this month, another video made its way to social media where a man was seen giving a ‘bath’ to a huge king cobra. The video showed the man casually pouring water from a bucket over the reptile without any fear. 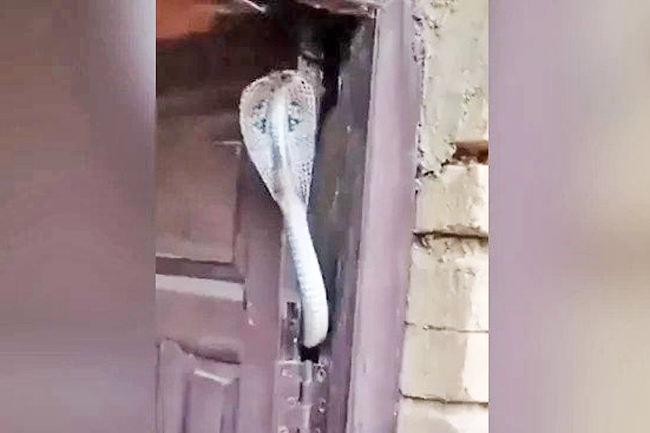