Clashes break out in Tripoli, drive rival Libyan PM away

CAIRO (AP) – An attempt by one of Libya’s rival prime ministers to seat his government in the capital of Tripoli triggered clashes yesterday between competing militias, forcing the newly appointed premier to leave the city.

The development underscored the fragility of the situation in the war-wracked country.

Prime Minister Fathi Bashagha’s (AP; photo below) office said he had arrived in Tripoli with a number of Cabinet ministers yesterday -three months after his appointment to lead an interim government.

The move was likely to fuel more tensions between Libya’s rival administrations and in the morning, local media reported clashes between different militias and rival forces supporting the two sides in central Tripoli and elsewhere in the city. There was no comment from the government of embattled Prime Minister Abdul Hamid Dbeibah, who is based in Tripoli. 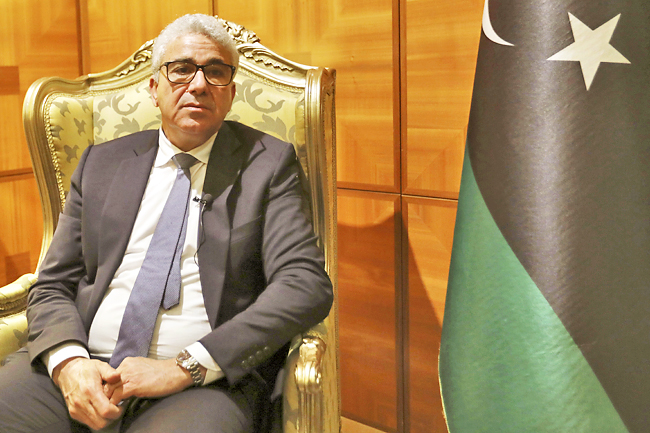 Bashagha’s office said he and his ministers left Tripoli yesterday “for the sake of the security and safety of citizens and to stop the bloodshed”.

The United Nations (UN) special adviser on Libya Stephanie Williams urged calm and for rival parties to engage in talks to resolve their disputes.

“Conflict cannot be solved with violence, but with dialogue and mediation,” she tweeted, adding that the UN is ready to host all parties “in helping Libya find a genuine, consensual way forward towards stability and elections”.

Bashagha, a former interior minister, was named prime minister by the country’s east-based Parliament in February.

But Dbeibah, a wealthy businessman, has refused to step down, insisting he will hand over power only to an elected government.