From January to October 2022, bilateral trade between Brunei and China amounted to USD2.53 billion and is expected to reach USD3 billion the whole year. This is another record high in the history of both countries, Chargé d’Affaires of the Embassy of China in Brunei Darussalam Wang Haitao said.

China has become Brunei’s largest source of foreign investment and the third largest trading partner. The sound development of Belt and Road projects such as Hengyi, Huawei, Muara Port and Hiseaton has given a strong impetus and contribution to Brunei economic diversification, he said.

Wang made these comments during the opening ceremony of the China Day 2022 at the International Convention Centre (ICC) in Berakas yesterday, which continues until tomorrow.

“While China has the Chinese path to modernisation, the Sultanate has Brunei Vision 2035 with Brunei characteristics, both aimed to achieve people-centred national development and a fulfilling life for the people. We are pleased to see that, under the care of our heads of state, the two countries are moving forward hand-in-hand on the paths to modernisation that suits our national conditions, bringing tangible benefits to our people by common development,” he said.

Year 2023, Wang said, “Marks the fifth anniversary of China-Brunei strategic cooperative partnership, as well as the 10th anniversary of the Belt and Road Initiative put forward by President Xi Jinping. China is willing to take these opportunities and make joint efforts with Brunei, to deepen practical cooperation during the high-quality development of the Belt and Road Initiative, to strengthen exchanges and mutual learning, to support each other in the cause of bringing more benefits to our peoples, jointly creating a new chapter in bilateral relations and making greater contributions to the peace, stability, prosperity and development in the region.” 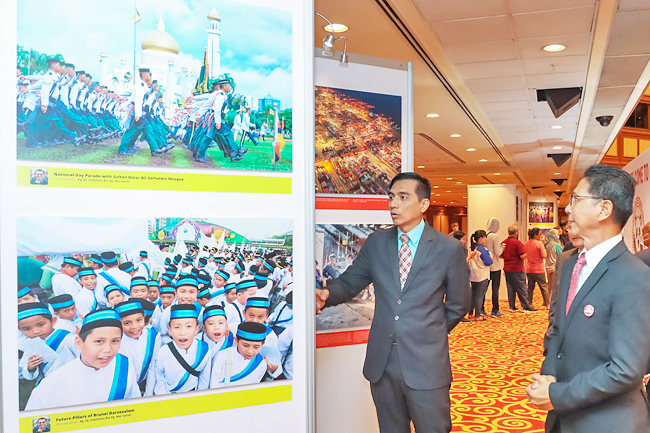 Meanwhile, Jackson Ting said China Day holds the vision of making a positive contribution through China’s Belt and Road Initiative to promote Brunei’s socio-economic development. “It will not only encourage business, trade and investment but also foster cultural exchanges between the Sultanate and China,” he said.

The event proceeded with Chinese drum and wushu performances. The permanent secretary also launched the Photography Exhibition in conjunction with the 30th anniversary of diplomatic relations between Brunei and China.

He unveiled the gallery and toured the exhibition showcasing visual artworks created by both Bruneian and Chinese photographers.

A ribbon-cutting ceremony was also held for the opening of the One Belt One Road booth.

Held in conjunction with the Brunei December Festival 2022, the second instalment of China Day is open to the public where they can enjoy an array of activities with 25 booths showcasing products from

China and local One Village One Product (1K1P). Cultural immersive workshops such as ‘How to make dumplings’ and ‘Chinese calligraphy’ are also conducted.