Through the “Monroecore” trend, influencers and other users are intent on turning the hairstyle, makeup and signature beauty spot of the glamourous Hollywood icon into a real source of inspiration for the season.

Not content with having made Barbie the new style and beauty icon for 2022, through the “Barbiecore” trend, stars, influencers and social media users are now on a mission to turn themselves into Monroe.

This legendary star has never lost her iconic status, but it’s hard to imagine a time when she might have inspired mere mortals with such picture-perfect precision. From her hairstyle to her lipstick to her mole, the trend now is about resembling the Hollywood icon in every way. 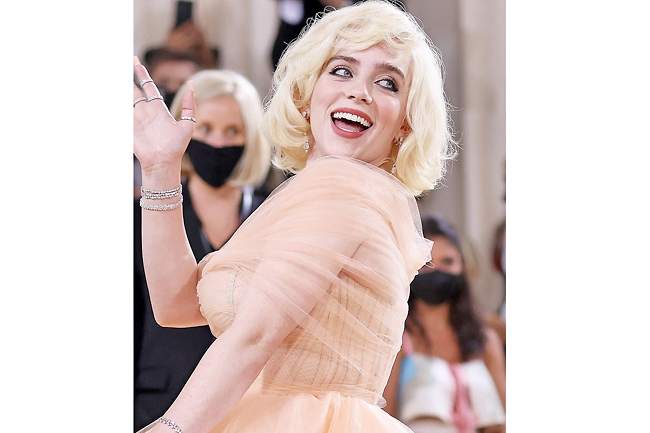 As for Barbie, Monroe being back in fashion is intrinsically linked to the news, and especially to a film release. In this case, it’s Blonde, the biopic that premiered at the 2022 Venice Film Festival, before being released more widely on Netflix at the end of September.

Subject to controversy, the feature film has amply contributed to making the American actress and singer the new idol of young people.

On TikTok, the hashtag dedicated to the star who died some 60 years ago has no less than 3.9 billion views, and that’s without counting its multiple derivatives. And, in a sign that her beauty look is again becoming a source of inspiration, the hashtag #marilynmonroemakeup has already scored 8.3 million views, compared to several hundred thousand for her legendary hairstyle.

Make no mistake, there are plenty of videos that share scenes from Monroe’s life or films, but they are far from the majority.

With the “Monroecore” trend, it is indeed about reproducing – with precision, if you please – the inimitable style of the American star, namely her cult platinum blonde hair – not her original hair colour – as well as her porcelain complexion, her carmine red lips, and her trademark beauty spot.

All of these aesthetic signatures contributed to making Monroe a reference in terms of beauty, and they seem to be more than ever appreciated by the general public.

As a result, tutorials are multiplying, teaching social media users how to reproduce her hairstyle and her cult makeup look.

Meanwhile, searches relating to Hollywood makeup of the 1950s are taking off on many platforms, like Pinterest. But the Monroe biopic is not the only cause of this craze for the star’s signature glamour.

For several months, many celebrities have paid tribute to the singer of the much commented Happy Birthday Mr President song.

QUEEN OF THE RED CARPETS

In September 2021, Billie Eilish – a true fashion authority – made a big impression at the Met Gala when she walked the red carpet in a stunning dress inspired by Old Hollywood style. But that’s not all. The American artiste swapped her usual hairstyle for a subtly wavy platinum blonde bob, clearly evoking the iconic haircut of Monroe.

It was a transformation that left no one indifferent, and one which has since inspired others.

From Lady Gaga to Paris Hilton and Elsa Hosk, many celebrities have not hesitated to show off the look on the red carpet. But the star who grabbed the most column inches in recent months is none other than Kim Kardashian, who had the honour of slipping into the historic dress worn by Monroe at the time of the said Happy Birthday Mr President performance in 1962, while also dyeing her hair blonde.

The outfit did not earn her only praise, however. On the contrary, she was soon accused of having damaged this collector’s item.

Clearly, films, and even more so television shows, are today real sources of inspiration in the fashion and beauty sectors. But it seems that the icons of the moment – like Barbie, Pamela Anderson (via the release of the Pam & Tommy miniseries on Hulu), and Monroe – all channel similar beauty criteria, far from the notion of inclusive beauty that was thought to be riding high.