YAOUNDE (XINHUA) – Jean Medard Mendouga has made a living cultivating cocoa for decades in Essessana, a village in Mengong subdivision of Cameroon’s southern region.

When Xinhua visited the locality, the 62-year-old had gathered with seven men and a woman at the heart of a cocoa plantation, separating cocoa beans from ripened pods that were harvested two days ago.

“Cocoa is my life,” said the father of six, who owns a two-hectare plantation.

Cocoa is the main source of livelihood for the villagers, but adverse consequences of climate change and fluctuating prices mean that they need to innovate if they must continue to earn a living from the crop, said 37-year-old Joseph Samba Mfouou who sat beside Mendouga.

“We used to harvest cocoa four and sometimes five times (annually), but now we harvest just twice,” said Mfouou who is also a reputable councillor of Mengong Council.

Selling the cocoa beans is no longer adequately providing the needs of producers, and the Cameroonian government is pushing farmers to transform more cocoa beans into products that they can sell, Mendouga said.

“We have attended seminars (to learn about cocoa processing). All of us here know about the cocoa process, but we are still novices,” he added. 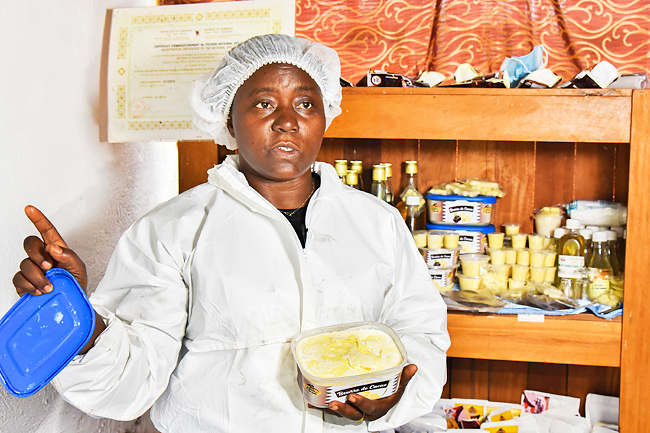 About 150 kilometres away from Mengong, in Meyomessi subdivision of the region, ambitious cocoa farmer Suzanne Ayolo is well aware of the importance of domestic processing of cocoa beans.

She spent most of her childhood in the plantation helping her parents harvest cocoa. At the age of 15, Ayolo had a dream of turning plantations into productive cooperatives that could export beans abroad.

The 44-year-old mother of two is among a number of Cameroonian entrepreneurs who are keen to seize the opportunity to process cocoa in Cameroon itself, before selling to locals and possibly exporting a more lucrative finished product.

Her company has become an attraction in the village where visitors come to witness the fermentation process and observe how the cocoa pods are left outdoors to dry in the sun before they are processed into several products, including chocolate, cocoa jam, cocoa butter, cocoa powder, and cocoa soap.

By the end of August, Cameroon cocoa grinders had processed 86,850 kilogrammes since the 2021/22 season began, up from 62,425 kilogrammes during the same period of the previous season, according to the National Cocoa and Coffee Board, which oversees the quality and pricing of cocoa in the country.

“Truly it’s a way of adding value to our products and country. This is what drives us to process (local products),” Ayolo said.

For farmers like Mendouga, local processing of the beans could also mean more profit. “The more the local companies, the more the demand for cocoa beans, and the higher the prices,” Mendouga said.

Its long-term profitability may depend on developing local demand for finished products, analysts said.