BATIE, CAMEROON – Wambesso Fankam stands out elegantly from the crowd at a funeral ceremony in western Cameroon.

As a prince, he’s among a select few who are traditionally entitled to wear an eye-catching fabric of vivid indigo with intricate white patterns. “It’s an ndop, not everyone can wear it,” he said with pride, to the beat of tam-tam drums and the balafon, a type of xylophone, in the western town of Batie.

The ceremonial cloth was once the preserve of chiefs, dignitaries and members of secret societies in the central African country.

But the culture around it is now being threatened by cheap imitations and crude rip-offs.

Ndop’s distinctive motifs – often animals or geometric shapes – are drawn on cotton fabric then embroidered with raphia before the material is dyed blue. Its richness is down to the many different combinations of symbols that can be designed on the ndop.

Cameroon is thought to have 13,500 traditional chiefdoms across its 10 regions. And it is the north and the mountains of the west where chiefs are seen as all but divine guardians of tradition, where ndop and its culture is the strongest.

Once warlords and masters of justice, these days chiefs’ powers are limited to inheritance or matrimonial disputes. 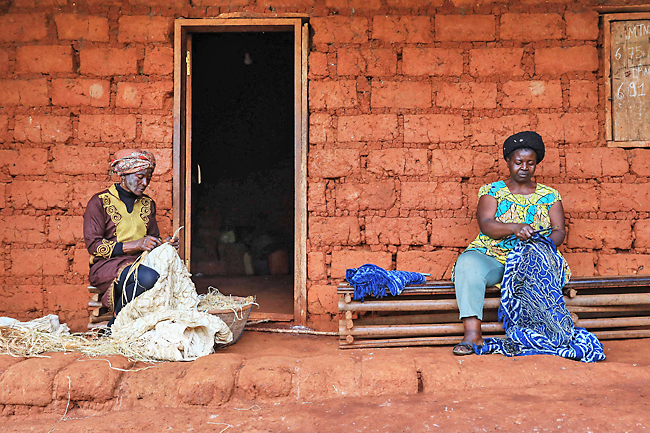 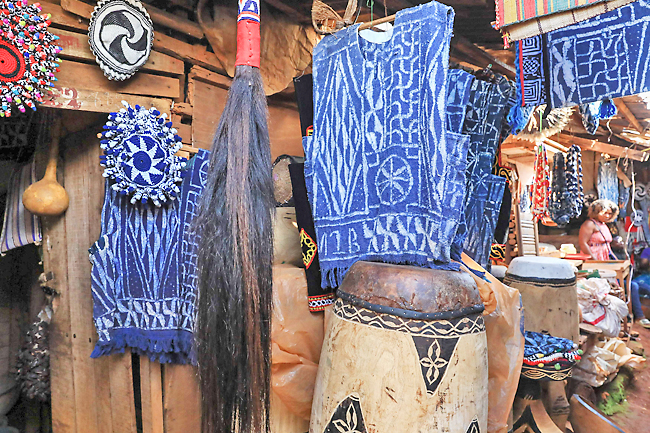 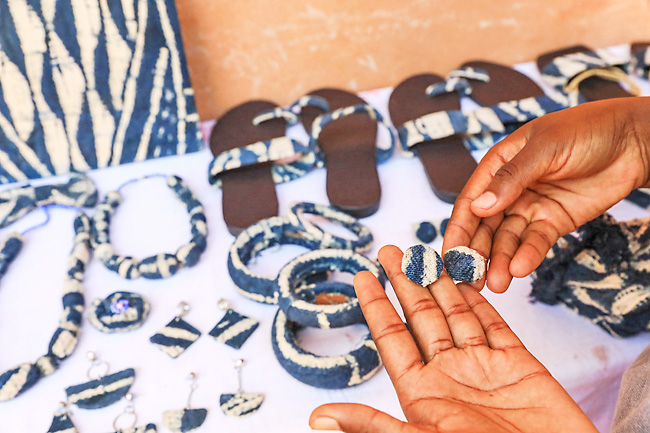 Even so ndop is “the most important ritual element” among the main western tribal group, the Bamileke, said head of the Sauvons le Ndop (Save the Ndop) group Hermann Yongueu, which is trying to preserve its heritage.

Making the cloth is a costly affair that takes several days’ work and requires specialised knowledge. Prices for a piece of ndop cloth can go up to XAF100,000 (about EUR150) – a small fortune in Cameroon where a third of the population lives on less than two euros a day.

Back in Batie, an ndop cloth is symbolically hung on a wooden fence at the main entrance to the funeral.

One woman is wearing a long dress entirely in ndop. “She is one of the few to wear an ndop outfit because she is a queen,” said Gisele Monkam, who accompanies the traditional chief.

Ndop mostly features “drawings that symbolise our way of life”, said Arsene Ngandjouong, who runs a museum in the village of Bangoua in the west of the country.

One of the principal motifs is “a circle which represents the duality of the Bamileke world, a communication between the living and the dead”, he added.

Sitting near the door of her house made of baked mud bricks in Baham, the main town high on the western plateau where ndop is still made, craftswoman Solange Yougo, 52, is busy on a piece of fabric she’s been working on for over a week.

Making ndop is extremely labourious, with some long pieces measuring up to 15 metres taking up to a month to complete. “I’m adding the finishing touches,” she said. The finished item will be white with an indigo tint.

On a bamboo bench, her cousin, Sylvie Momo, 50, holds an already dyed piece.

Cameroon’s Ministry of Arts and Culture declared ndop a part of its official national heritage earlier in February 2020 and some also want it to be given UNESCO status as further protection.

For while it was once strictly reserved for royals and nobles, ndop has been fast losing its exclusivity, so much so that some of its motifs are now turning up on bottles as well as low quality wraps and boubous, the loose unisex garment popular across West Africa.

“It is even becoming a bit vulgar,” complained museum head Ngandjouong.

“In the past when someone who hadn’t the right to wear ndop wore it, they had to pay a fine,” said Prince Fankam. “But the most important thing is that we pass on knowledge of how to make it,” said Hermann Yongueu. “Before ndop fabric was controlled by the chiefs and the kings made sure that the savoir-faire was passed on to the makers’ children. From the age of seven, children began their apprenticeships.”

But today few young people are prepared to take that on, preferring more lucrative jobs like driving motorbike taxis.

Others hope that a little of the reflected glory the fabric is picking up abroad might tempt them back, with the French luxury fashion house Hermes using ndop motifs in one of its silk scarf collections four years ago.