SAN DIEGO (AP) – Lyn Jutronich was resting in the water during her morning ocean swim when something rammed her hard out of the water.

Jutronich, 50, said she immediately knew it was a shark. She gave her first interviews over the weekend from her hospital bed where she is recovering after the shark bit her leg last Friday off the Pacific coast of Del Mar, north of San Diego.

“I felt a huge, like a really hard hit right, I don’t know how else to say this, like right between my legs and it pushed me, it hurt and it pushed me up and out of the water,” Jutronich described to ABC News affiliate KGTV.

“I saw it clamp on my leg so I don’t know if I saw it bite my leg or if I saw it after it bit my leg, but I definitely saw the mouth,” she recalled. Still clamped onto her right leg, Jutronich said it then shook her once “kind of like a dog”.

Then it let her go.

A friend swimming with her saw her being flung around in the water, then he saw the shark’s fin. He helped her get back to shore where lifeguards and emergency crews treated her then rushed her to a hospital.

She is being treated for puncture and laceration wounds to her upper right thigh.

The shark is believed to have been a juvenile white shark, but officials are waiting for scientists to confirm that.

Jutronich told reporters she is still processing what happened. 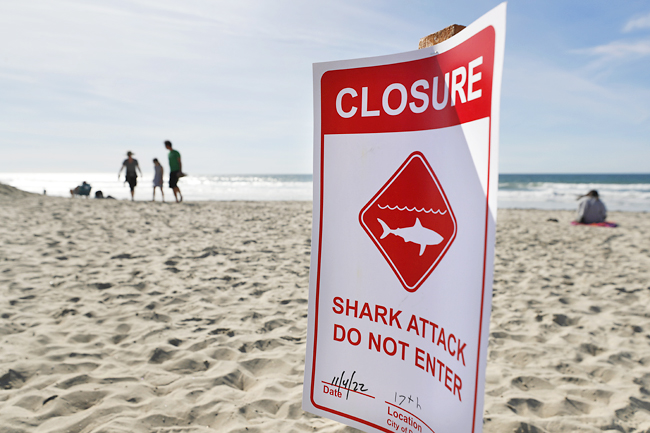