Brunei Darussalam is currently in the inter-monsoon period whereby throughout October and November, local wind effects will play an important role in governing the daily weather, with fair weather in the morning and isolated coastal showers around midday.

The Sultanate will experience thunderstorms over inland in the afternoon, spreading and affecting coastal and sea areas at night, and may occasionally persist to early morning of the following day.

The weather conditions were shared by Brunei Darussalam Meteorological Department (BDMD) meteorologist Harnina binti Morani at the 17th National Weather Briefing at the auditorium of the Information Department yesterday.

A total of 119 representatives from government agencies, the private sector and the public attended the briefing.

Organised by the BDMD under the Ministry of Transport and Infocommunications, the event focussed on the weather condition as well as climate and future outlook of the inter-monsoon period.

The briefing was part of the department’s initiatives to engage with different user groups including first and safety responders, economic and industry groups, construction companies, insurance companies, small and medium enterprises, and the media. Harnina said the predicted rainfall for October is slightly higher than normal which is between 377 millimetres (mm) to 440mm, while a slightly higher predicted rainfall than normal of 386mm to 450mm in November.

She said, “The La Nina will continue through the northern hemisphere winter with 91 per cent in September to November, decreasing to 54 per cent chance in January to March of next year.” 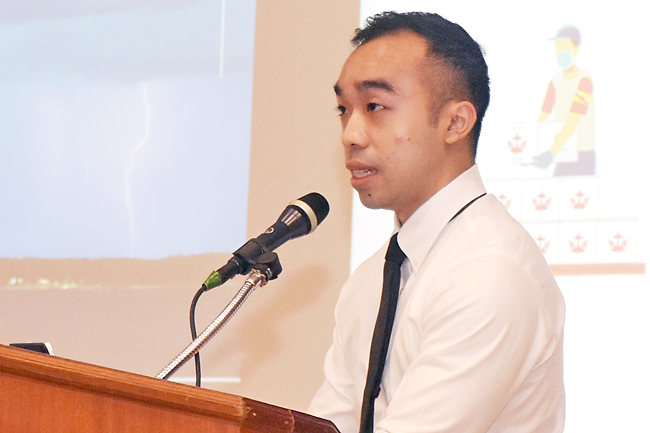 “Identify those who are vulnerable in your neighbourhood and surrounding communities to assist in case of a natural disaster. Establish a network of community in your village and actively share updates during times of emergency and after disaster, and check up on your neighbours, especially the elderly,” he said.

For volunteering, he said, “Communities can register and be involved in community-led organisations and emergency preparedness groups such as Brunei Red Crescent Society, mosque youth, Disaster Preparedness Coordinators and youth volunteers.”

Meanwhile, the briefing aimed at increasing understanding and awareness of the current weather conditions.

According to the BDMD, active weather condition is forecast until Sunday due to moist atmosphere over the region enhancing development of rain clouds over the Sultanate.

Public, road users and fishermen are advised to be up to date with the latest weather forecast, advisory and warning issued by the BDMD, and to take action to ensure safety.