LAS VEGAS (AFP) – Mobsters who end up sleeping with the fish are usually never seen again.

But climate change has a way of messing even with the mafia, and a watery grave outside Las Vegas is starting to cough up Sin City’s darkest secrets.

Lake Mead, which can be reached from the Las Vegas Strip by a short ride in the trunk of a car with your hands and feet bound, is drying up in a gruelling decades-long drought.

Its receding waters are leaving behind the usual flotsam and jetsam of a lake heavily trafficked by weekend boaters. But also bodies.

One particular find caught the attention of mob-watchers – the skeletal remains of a man who had been shot in the head, stuffed in a barrel and tossed in the lake four decades ago.

“The mob had a propensity to put people in barrels, whether they’re burying them in a lake, or dumping them out in the field,” said Geoff Schumacher of The Mob Museum in Las Vegas.

“That’s number one. Number two, the person was shot in the head, typical mob hit style.

“And third, we know that this happened in the late ’70s, early ’80s (when) the mob was very prominent in Las Vegas.” 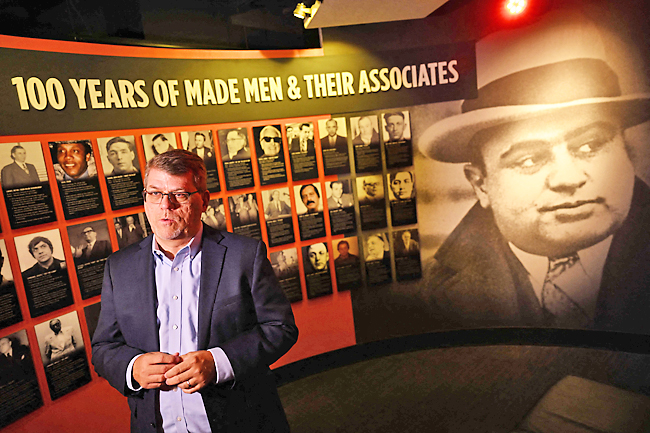 Las Vegas had been founded in 1905, but it wasn’t until work began on the nearby Hoover Dam in the 1930s that its population swelled. The influx of construction workers – mostly single men – created a market for entertainment.

And in the background, organised crime flourished.

“The mob played a pretty big role in the development of Las Vegas from the 1940s through the 1980s,” said Schumacher.

“There was a lot of behind-the-scenes activity where the mob was controlling the management of businesses, but also building and expansion, using in many cases, Teamsters union money.”

The city grew rich in the post-World War II boom that fuelled the American dream.

And for every USD100 that a hapless tourist spent, a mafia boss wanted his cut.

The skimming, which doubtlessly cost the city millions of dollars in lost taxes, was a double-edged sword.

“They also sort of created this mystique about Las Vegas,” said Schumacher.

“People wanted to come to Las Vegas, on the idea that ‘oh, maybe when I sit down at a restaurant, there’s going to be a mob guy sitting next to me’.”

But it wasn’t all glamour.

“The reality was that these guys were cold-blooded killers; they were thieves. If you were to cross the mob in some way… there definitely were consequences.” Las Vegas police are still investigating the body found in the barrel at Lake Mead earlier this year, and in response to AFP inquiries would only say there is an ongoing probe.

Schumacher has his theories about the dead man’s identity.

A likely candidate for the body in the barrel is a man named Harry Pappas who was connected to the Chicago Mob.

“One of the extra perks for visitors to Las Vegas, if you were a high roller… was they would take you out on the boat at Lake Mead,” Schumacher said.

“The Stardust had a boat out there and Harry Pappas was in charge of that whole operation.

“Right before he disappeared, he told his wife he was going to lunch with someone who was interested in buying his boat. We’ve never seen Harry Pappas again.”

Lake Mead is a massive reservoir on the Colorado River created by the Hoover Dam. It is now just a quarter full – the result of a drought and warming temperatures fuelled by man-made climate change – and shows no sign of stabilising.

As its shoreline retreats, revealing more of the lake bed, it may yield more mob secrets, said Schumacher.

“I don’t know if we find another body in a barrel, but I have to believe that there could very well be a second murder victim out there.”