Murals, when executed correctly, have the ability to beautify even the dullest of structures.

Overseas, murals have helped embellish both cities and streets, and are viewed as an integral part of public art.

When a public space is artistically transformed by a burst of colours, it quickly becomes the talk of the town and ropes in a crowd.

In the Sultanate, interest in graffiti art is fast growing among talented artists, with the public closely in tow.

Such is the case with the otherwise forgotten row of shophouses in Batu Satu. With the introduction of newer malls, the Batu Satu area – which once served as a commercial hotspot – had seemingly fallen into neglect, giving the public one less reason to stop by.

However, that is slowly changing all thanks to the skilled hands of Guerilla Artchitects artists who have given the old structure a bold make-over. 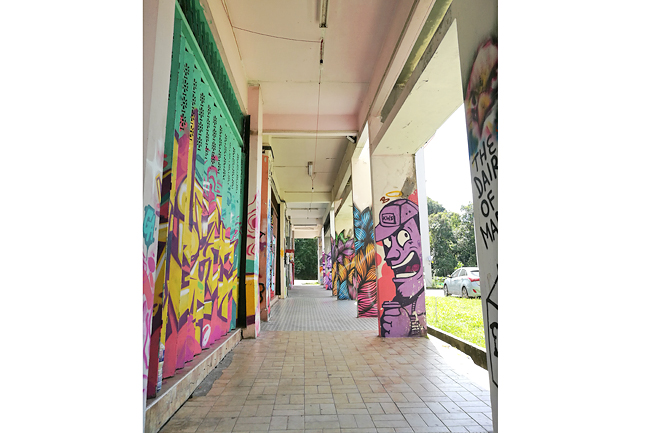 The public applauded the artists for their time and hard work in beautifying the space with an array of striking artworks, adding that before the makeover, the “place seemed neglected and gave off a creepy vibe – despite being occupied by tenants”.

As word of the revamped space continues to spread, more and more people are turning up with camera in hand. Among them was a group of young riders who had learnt through a friend of the “great spot to take pictures”.

“It is definitely a photo-worthy spot and the entire artwork can be captured with a good, wide-angled camera. It would be amazing if more of such artworks can be created to add colour to our buildings. This backdrop can also be used for pre-wedding photoshoots,” they opined.

Echoing the sentiment, another visitor called for the Sultanate to embrace such public artworks to beautify its buildings, explaining that mural painting “is eye catching and does a good job at drawing attention to an area”.

“Perhaps establishments such as Guerilla Artchitects can do more of this, through collaborations with the public or private sector, to revamp the capital as well as the towns in Tutong, Belait and Temburong districts,” she added.

“Such artworks will provide tourists more options when it comes to photo opportunities, and when these images are uploaded onto social media platforms, their friends and followers will also learn about Brunei.”