Avid blood donor, Haji Md Zainul Hasramin bin Haji Md Hassan, 45, said to be a regular and consistent blood donor, it is important to be mindful of what you eat.

“Your food intake is definitely something you need to watch. You cannot eat too much or too little for your body to be able to produce the right amount of blood for yourself, and have enough to donate,” said Haji Md Zainul.

Since starting 22 years ago, Haji Md Zainul has donated blood 24 times. He began while studying in Malaysia, donating four times, and then continued to do so once he started working.

“My blood type is ‘A’, one of the types that is constantly depleted at the blood bank,” he added.

The avid donor was interviewed during a blood donation drive at OneCity Shopping Centre, organised by the Raja Isteri Pengiran Anak Saleha (RIPAS) Hospital Blood Donation Centre and supported by the shopping centre.

Haji Md Zainul believes donating blood is not something anyone should be afraid of, as it helps the people in need while enjoying health benefits. 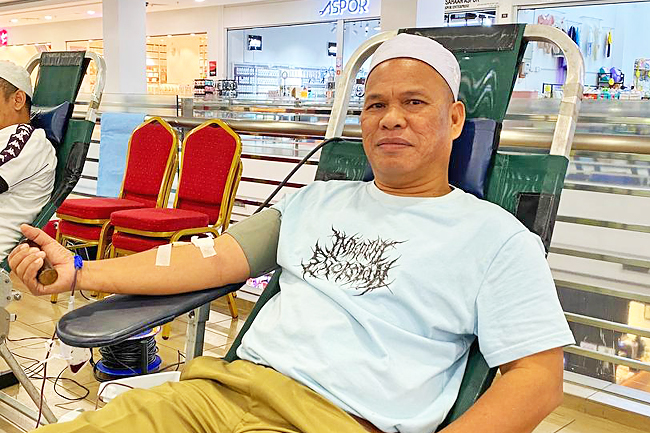 “It should be fine to donate blood while your body is healthy, even if you might gain some weight after.

“Make the effort to do so considering the health benefits,” he said.

Meanwhile, 59-year-old Khalidi bin Haji Masri, who first donated blood in the 80s, has done so countless times in his youth.

He had even received a silver medal from the Ministry of Health for donating blood every three to six months back then.

Khalidi said up until yesterday, he hadn’t donated for a time because he started taking high blood pressure and cholesterol medication and thought that had disqualified him from doing so.

He only found out at the event yesterday that taking such medications did not automatically prevent an individual from donating blood, and was immediately happy to do so again.

“Now that I know, I’m planning to donate again once the time comes. I’m grateful that I can do it today,” added Khalidi.

Sabrina said while it is possible for others to donate blood every two months, she has been advised by doctors to wait an extra month considering her low haemoglobin levels.

“To overcome my haemoglobin issues, I consume nuts and food rich in iron so I am able to donate blood regularly,” added Sabrina.

The young blood donor said some of her friends are afraid of donating blood when asked.

She believes that people should give donating blood a try, even if it isn’t necessary, just to experience something new, especially if it can save someone in need.

“There are people who have rare blood types and we’re always low on those blood stocks.

“I have B-positive blood so I can’t help those with rarer blood types such as ‘O’ or ‘A’,” she added.