AP – Los Angeles and Mumbai, India share many superlatives as pinnacles of cinema, fashion, and traffic congestion. But another similarity lurks in the shadows, most often seen at night walking silently on four paws.

These metropolises are the world’s only megacities of 10 million-plus where large felines – mountain lions in one, leopards in the other – thrive by breeding, hunting and maintaining territory within urban boundaries.

Long-term studies in both cities have examined how the big cats prowl through their urban jungles, and how people can best live alongside them – lessons that may be applicable to more places in coming decades.

“In the future, there’s going to be more cities like this, as urban areas further encroach on natural habitats,” said biologist Audra Huffmeyer, who studies mountain lions at the University of California, Los Angeles.

“If we want to keep these large carnivores around on the planet, we have to learn to live with them.” 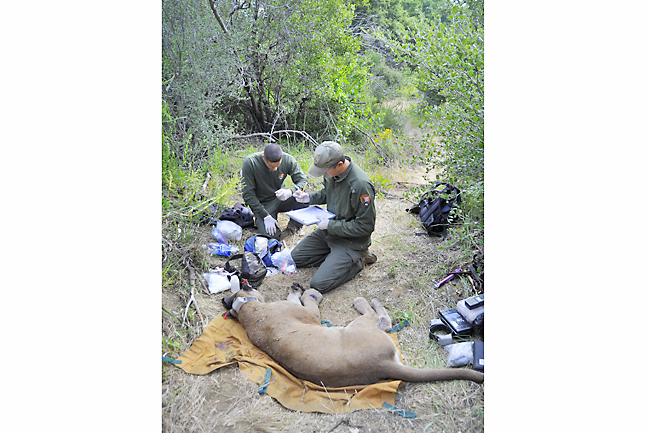 Twenty years ago, scientists in Los Angeles placed a tracking collar on their first cat, a large male mountain lion dubbed P1, that defended a wide swath of the Santa Monica Mountains, a coastal range that lies within and adjacent to the city.

“P1 was as big as they get in southern California, about 150 pounds,” said National Park Service ecologist Seth Riley who was part of the effort. “These dominant males are the ones that breed – they won’t tolerate other adult males in their territory.”

With GPS tracking and camera traps, the scientists followed the rise and fall of P1’s dynasty for seven years, through multiple mates and litters of kittens. “2009 was the last time we knew anything about P1,” said Riley. “There must have been a fight. We found his collar, blood on a rock. And never saw him again. He was reasonably old.”

Since then, Riley has helped collar around 100 more mountain lions in Los Angeles, building a vast database of lion behaviour that’s contributed to understanding how much territory the cats need, what they eat (mostly deer), how often they cross paths with people and what may imperil their future.

As with medieval European kings, the biggest threat turned out to be inbreeding.

Living in small territories separated by highways has caused some males to mate with daughters and granddaughters, who weren’t able to naturally disperse farther away. That’s led to genetic problems such as fertility issues and kinked tails.

“Based on genetic analysis, we know that P1 mated with P6, his daughter – that was the first case we documented of this very close inbreeding,” said Riley.

In Mumbai, one of the world’s most densely populated cities, the leopards are packed in, too: about 50 have adapted to a space ideally suited for 20. And yet the nocturnal cats also keep mostly out of sight.

“Because these animals are so secretive, you don’t know much about them. You can’t just observe them,” said Director of Wildlife Conservation Society in India Vidya Athreya and part of a research team that recently fitted five leopards with tracking collars.

The leopards’ core range is centred around Sanjay Gandhi National Park, a protected area boxed on three sides by an urbanised landscape, including a neighbourhood that’s home to 100,000 people and nearly a dozen leopards.

Researchers tackled specific questions from park managers, such as how the cats cross busy roads near the park.

To get the answer, they collared a big male dubbed Maharaja. They found that it walked mostly at night and traversed over 60 kilometres in about a week, from the park in Mumbai to another nearby.

The leopard crossed a busy state highway, using the same spot to pass, on three occasions. It also crossed a railway track.

The path chosen by Maharaja is nearby a new highway and a freight corridor under construction.

In Los Angeles, long-term mountain lion research showing the harm of fragmented habitat helped fuel a successful campaign to build a wildlife crossing bridge over United States (US) Route 101, one of the city’s busiest freeways. Construction began on April 22.

When it’s finished in three years, the bridge will be covered in native plants and include special sound walls to minimise light and noise disturbances for nocturnal animals. It will connect Santa Monica Mountains and Simi Hills, enlarging the dating pool for resident mountain lions.

But learning to live alongside cats is not only a matter of infrastructure decisions, but also human choices and education.

When Athreya first started advocating for co-existence with Mumbai’s leopards, she was met with scepticism and pushback from other biologists and policymakers. They thought it would be impossible for big cats to live alongside people without significant friction, or worse.

“The dominant narrative was about conflict,” she said. But she helped push the conversation to be about “negotiations, improving the situation for both wildlife and people”.

That is not to say living alongside a big predator is without perils. In Mumbai, Purvi Lote saw her first leopard when she was five, on the porch of a relative’s home. Terrified, she ran back inside to her mother. But now the nine-year-old said she isn’t as afraid of the big cats.

Like other children, she doesn’t step outdoors alone after dark. Children and even adults travel in groups at night, while blaring music from their telephones to ensure that leopards aren’t surprised. But the most fundamental rule, according to the youngster: “When you see a leopard, don’t bother it.”

Leopards in Mumbai adapted to mainly hunt feral dogs that frequent garbage dumps outside the forest and mostly attacked people when cornered or attacked. But in 2010, 20 people in Mumbai died in leopard attacks, said official at Mumbai’s protected forest Jagannath Kamble.

The turning point was the realisation that the understaffed forest department couldn’t just keep reacting to individual attacks by capturing and transporting leopards to forests since they returned.

Instead, it decided to focus on trying to get people to coexist with the predators.

Officials roped in volunteers, non-governmental groups and the media for a public education programme in 2011. Since then, fatalities have dropped steadily and no one has been killed in an attack since 2017.

The last known victim was Muttu Veli’s four-year-old daughter Darshini. Veli, an office worker who came to Mumbai in 1996, said Darshini was playing outside their home in a slum at the edge of the forest and she just didn’t return home. Eventually, her mauled body was recovered.

“My daughter is gone. She won’t come back,” he said.

In Los Angeles, there have been no human deaths attributed to mountain lions, but one non-fatal attack on a child occurred in 2021.

Both cities have learnt that trying to capture, kill or relocate the cats isn’t the answer.

“Relocation and killing makes conflict worse,” said California Regional Director at National Wildlife Federation Beth Pratt. “It’s better to have a stable population, than one where hierarchies and territories are disrupted.”

Avoidance is the safest strategy, she said. “These big cats are shy – they tend to avoid human contact as much as they can. They’re really extreme introverts of the animal kingdom.”