JPKK Suka-Suka beat their rivals IBTE A in the finals of the 16th Futsal Tournament for teachers in the Belait District at the multi-purpose hall of the Mumong Sports Complex on Sunday.

Organised annually by the Belait District’s Department of Co-Curriculum Education (JPKK), the tournament serves to prepare the players representing the district for the National Futsal Tournament held in conjunction with the 32nd Teacher’s Day.

Some 11 teams comprising teachers from Cluster 6 schools across the Belait District, competed for the champions title. The tournament was split into two categories, with IBTE B (SR Pythons), SMSA ‘A’, PAWA 22, SMPJNPHAB XL, JPI C and Sume FT competing in
Category A.

Meanwhile, BKT 2022 SMPAPHRSB, JPKK Suka-Suka, IBTE ‘A’ (Gearbox Pacah), and SMSA ‘B’ went against each other in Category B. 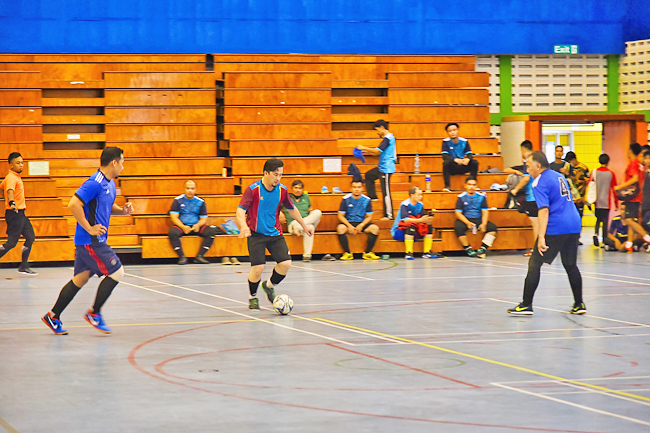 The top three teams in the categories moved into the quarterfinals of the tournament, where IBTE ‘A’ won against PAWA 22 with 2-0, while JPKK Suka-Suka edged out SMSA ‘A’ with a close victory at 3-2.

In the semi-finals, IBTE ‘A’ won a tight game against JPI ‘C’ with a 4-3 scoreline, while JPKK Suka-Suka clenched a win against BKT 22 with a solid 2-0. JPKK Suka-Suka dominated IBTE ‘A’ in the final as the match concluded 4-0.

Meanwhile, the Silver Plate section of the tournament saw Sume FT going up against IBTE ‘B’, with Sume FT winning with a single-goal lead at 3-2.

Former officer at the JPKK Josni bin Nyambong delivered the prizes including the Challenge Cup to tournament champions JPKK Suka-Suka.

Two special awards were also handed out including the Best Player to Mazlani bin Haji Abdul Ghani from IBTE ‘A’ and the Most Fair Play Team to IBTE ‘B’.