AMMAN (AFP) – Jordan-based artist Maria Nissan is on a mission: to rid the world of single-use plastics and to raise public awareness about the environmental scourge through eye-catching art.

One of her best-known murals graces the side of a building in the capital Amman, a giant work made from more than 2,000 plastic bottles, almost 1,000 shopping bags and over 150 pipe hoses.

A United States (US) citizen of Iraqi origin, Nissan said she became enchanted with Amman when she first visited three years ago, but also felt “frustration and anger” at the piles of garbage on the streets and in areas of natural beauty.

“Despite the beauty of the city, walking its streets can be a journey filled with all kinds of trash,” the 35-year-old said. “My eyes cannot turn away from the abundant shiny plastic bags, glass bottles, soda cans, candy bar wrappers,” said Nissan, who occasionally sports a dress made from a sturdy blue Ikea bag.

Trained in painting and drawing in the US and Italy, Nissan decided to collect and repurpose the trash to create art – often collages themed on women’s faces, flowers and Oriental motifs.

Her home, where she has a rooftop workspace under a large canopy, is filled with every imaginable kind of discarded plastic object, from razors and toothbrushes to lighters, pens and plastic spoons. “Art made of plastic is a concrete and powerful way to raise concerns on environmental issues that affect Jordanians, their children, their communities and natural environments in the kingdom,” she said. 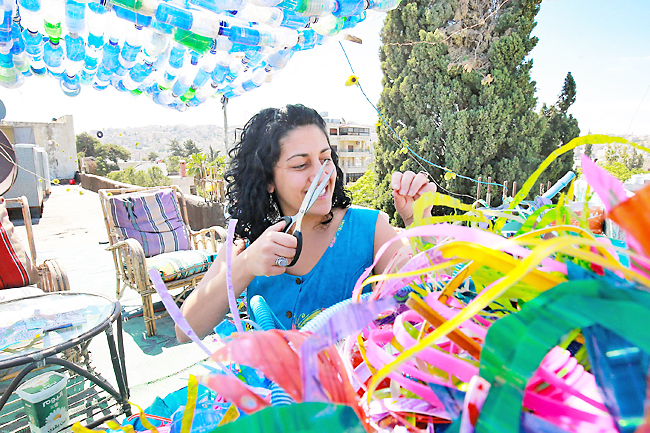 “A bottle littered in a valley will take up to 450 years to decompose,” said Nissan, pointing out that the effect is “micro-plastics polluting the soils, water and the wildlife”.

“Because plastics are littered indiscriminately in fields and water, livestock and fish feed themselves indirectly with plastic pieces that we will ultimately find on our plates.”

Nissan’s work has been exhibited in 12 shows in Jordan as well as in Italy and Greece, and features on her Instagram channel @marianissanart, all with the purpose of changing minds and habits.

Jordanians use three billion plastic bags every year, part of the country’s annual solid waste load of 2.2 million tonnes, of which only seven per cent is recycled, according to the UN Development Programme.

Nissan urges people to avoid buying plastic products and to go shopping with reusable bags, and also advocates a tax on single-use plastics.

“The consequences of single-use plastic pollution are often delayed, and therefore it is difficult to have people feel accountable and responsible for their own acts,” she said. “Plastic comes back to us in one way or another… It’s nobody’s responsibility until it becomes everybody’s problem.”