Beauty of ‘Land Below the Wind’

A moment that is difficult to forget – that is what can be described when reminiscing about a recent trip to the ‘Land Below the Wind’, Sabah, the second largest state of Malaysia.

With an area spanning 72,500 square kilometres, Sabah is filled with beaches surrounded by the South China Sea in the west, the Sulu Sea in the northeast and the Celebes Sea in the east, with the state placed in the northernmost part of Borneo Island, which is the third largest island in the world.

Despite having already returned home, images of the atmosphere and surroundings of Sabah, including Kudat and Kota Belud, still play in my mind and will surely be remembered forever.

The journey came alive as this writer was also accompanied by people with a travelling spirit from local media and tourism agencies. 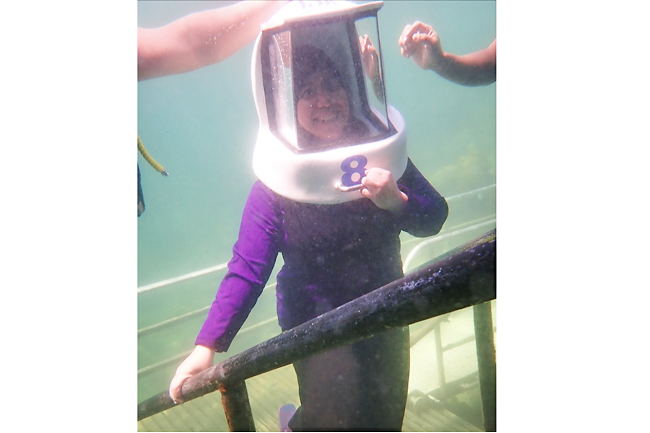 Before arriving in Kota Kinabalu, we stopped to enjoy a special satay dish at Gerai Makan C Jali-Jali, a food stall at the Sipitang Esplanade Sate Stall, while enjoying the sea breeze.

We then reached a hotel, Hyatt Centric Kota Kinabalu, which has been given a new lease of life.

On the second day in Kota Kinabalu, after staying at The Pacific Sutera Hotel, we started heading to the northernmost district in Sabah – Kudat.

The area is famous as a seafood hub, including Kafe Abang J, Kampung Nelayan Kudat. Every touch of the cuisine is the result of the catch of local fisherman anchored around the café’s waters.

When we first set foot in Kudat, we were stunned by the beauty of the area, especially the white and fine sandy beaches.

One of the most synonymous with Kudat is ‘Tanjung Simpang Mengayau’ or ‘The Tip of Borneo’, which is located about 25 kilometres from Kudat Town. A journey to Kudat is not complete if you do not reach the farthest point of the Borneo Archipelago, known as the ‘Horn of Sabah’.

By watching the sunset from atop a hill against the backdrop of the meeting between the blue South China Sea and blue Sulu Sea, the beauty is sure to captivate visitors.

However, the special place with historical value is not open to public visits due to a government project expected to be completed in June 2023.

As an interesting option, visitors who want to explore Tanjung Simpang Mengayau area can stay at Tommy’s Place, one of the country inns that leads to the Kalampunian Beach that is decorated with tall trees.

Several day tour packages can be found in Kudat, including gong making at Sumangkap Village and Gombizau Village Bee Farm.

Walau Tobilung located in Kampung Minansad, Kota Marudu which is also part of Kudat is another attraction that can be visited. It offers the experience of exploring traditional houses of Dusun Tobilung including the values of history, culture and tradition as well as a monument that symbolises the existence of Tobilung in the world, particularly in northern Borneo.

THE AMAZING AUTHENTICITY OF KOTA BELUD

After having breakfast at Kidat Golf and Marina Resort, our group continued to Kota Belud.

Although the journey was long, we arrived at some community-based tourism locations in Kota Belud, whic did not disappoint.

Among them was Polumpung Melangkap View Camp Site and Tambatuon Eco-Tourism. Also not forgotten are the memories of visiting Usukan Cove Lodge, a homestay for those wanting to explore Pandan-Pandan Island in Kota Belud.

Many activities are available, including camping and bathing in the river.

You can also see the beauty of the peaks of Mount Kinabalu and Anak Kinabalu.

Throughout the tour in Sabah, our group used transportation under the management of Inno Travel and Tour Services

Among the places we visited before going to Kudat and Kota Belud was the 200-metre long Tamparuli Suspension Bridge, which is an iconic landmark of the community in Tamparuli Town, Tuaran District, in addition to the Sabah Upside-Down House (Rumah Terbalik).

One of our final stops in Kota Kinabalu was to explore activities and water sports such as snorkelling, kayaking, a water bouncer park, as well as an opportunity that I had been waiting for – witnessing the coral reefs and tropical marine life directly in the ocean by sea walking at JSK Borneo Reef.

Located in Tunku Abdul Rahman Marine Park, next to Gaya Island and Sapi Island, JSK Borneo Reef can be reached by boat from Jesselton Point, Kota Kinabalu, which takes less than 30 minutes.

Although the time of the visit to Sabah was packed, it was full of fun, especially with the welcome of the friendly Sabah residents.

Every moment certainly captured a beautiful memory of its own that will always remain in our hearts.