Back to school blues

THE WASHINGTON POST – When Aubrey Garcia’s daughter was in the third grade, she suddenly stopped attending school.

Every day, Garcia, a former teacher, would ask herself, “‘Is she going to go to school today? What can I do to make her want to go to school?’ It was just a constant battle.”

Garcia was dealing with an increasingly common behavioural issue – school refusal, which is also known as school avoidance or anxiety.

Clinical psychologist Christopher Kearney, who directs the Child School Refusal and Anxiety Disorders Clinic at the University of Nevada at Las Vegas, defines it as “a child-motivated refusal to attend school and/or difficulty remaining in classes for an entire day”.

Garcia’s daughter, who had some learning and emotional issues and would later be diagnosed with autism, could not articulate why going to school made her anxious.

And the small Texas educational district she was in could not give her the support she needed.

Eventually, the family moved to a Houston-area school system that provided the child with plenty of resources, including a psychotherapist, speech therapist, music therapist and social skills group leader. 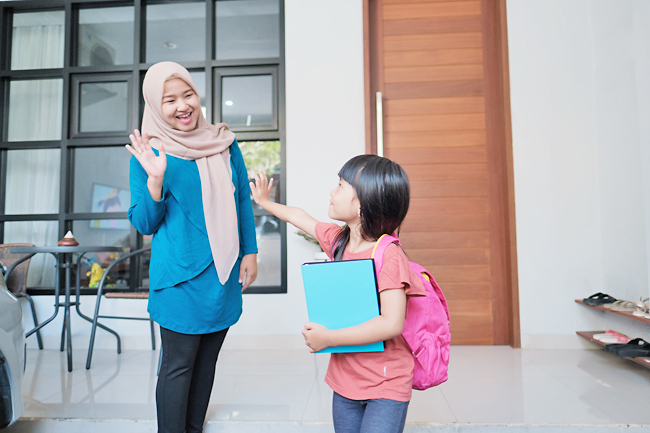 With this support, and the help she got outside school, Garcia’s daughter began to attend much more regularly.

On the occasions that she did balk about going – usually related to anxiety about “a social situation that she didn’t understand or know how to work through”, her mother said – the school helped figure out what had happened, talked her through the situation and got her to return.

“You just really need a whole team of people,” Garcia said. “And we’ve been able to build that for her. But, you know, it took many years.”

Not all school-refusal situations resolve so positively.

Consider the case of a sensitive 19-year-old who stopped attending a competitive magnet school in Northern Virginia when he was a freshman.

His mother, who spoke on the condition of anonymity for her and her son to protect his privacy, thinks the initial cause was related to academics, although, looking back she believes her son had signs of anxiety that doctors brushed off.

In the five years since that time, she and her husband have tried several approaches.

These have included moving him to a new school, enrolling him in cognitive behavioural therapy (CBT) – which teaches people to understand and control anxiety by changing thinking and behavioural patterns – trying a variety of medication, sending him to therapeutic residential programmes, and trying wilderness therapy and virtual schooling.

Nothing worked well or consistently enough to allow him to finish high school.

At this point, he is making his own decisions; he’s seeing a therapist he trusts, has gone back on medication and has started volunteering at an animal-related business.

His mother has encouraged him to go at his own pace, telling him, “We’ll figure stuff out. Life isn’t a race.”

The problem is difficult to quantify, according to Kearney, because researchers use different definitions – some focus on missed school time, for example, while others might include distress while at school.

Research by Kearney, who also chairs the department of psychology at the University of Nevada at Las Vegas, found that the issue affects between five per cent and 28 per cent of school-age kids at some time during their education, and equally affects kids of different racial, ethnic and income groups.

Anecdotally, Kearney and other experts said, school refusal has become more common during the pandemic.

“I work with many schools and school systems, and absolutely it’s increasing,” said clinical psychologist Jonathan Dalton, founder and director of the Center for Anxiety and Behavioral Change in Rockville, Maryland, and McLean, Virginia.

Data appears to bear that out. In July, the Education Department reported that 72 per cent of public schools reported an increase in chronic absenteeism (of which school refusal would be a subset) compared to a typical year before the pandemic.

A survey of school counsellors conducted in April by the New York Times found that 85 per cent said they were seeing more chronic absenteeism than before the pandemic.

That would not be surprising, given the fact that rates of anxiety and depression were increasing in children even before the pandemic and that school refusal can be a symptom of those disorders.

Furthermore, many kids spent months learning from home during the pandemic, and, if a child has a tendency toward school refusal, allowing them to stay home makes it more difficult to get them to return, Dalton said.

“One of our pet peeves is when people who aren’t experts in this recommend homebound services because the kid’s experiencing a lot of distress when they’re in school,” he said.

“It’s the confrontation with fear, it’s persisting in the presence of distress” that is the best treatment for school refusal. (One caveat: If a child is suicidal, they should be stabilised before the school issue is addressed.)

Avoidance, not anxiety, is the real enemy. “Anxiety is two things: It’s temporary and harmless,” Dalton said. “What I treat is avoidance, and avoidance can ruin lives.”

Here’s what parents need to know about the condition and how to handle it:

IT SHOULD NOT BE IGNORED

A lot of parents take the attitude that school avoidance is “something that’s eventually going to go away, or it’s not a big deal”, Kearney said.

While it’s true that some cases, especially those that accompany the start of a new school year or a change in school, may resolve on their own, “there’s going to be a subset of kids where their level of distress is going to remain high”.

Clinical psychologist Stephanie Mihalas said, “A lot of parents tend to dismiss this as something that children can just get over if they push them harder and they think it’s just like a phase.”

But, added Mihalas, who is an assistant professor in the psychiatry department at the David Geffen School of Medicine at UCLA, “school refusal is a disorder, and it causes significant disability and distress for children and teens”.

THERE ARE WARNING SIGNS

Dalton said school avoidance can begin gradually – with kids complaining about physical symptoms such as stomachaches – and eventually stiffen into full refusal.

Other times, he said, there is a clear antecedent, such as an illness, death in the family, school or home move, or loss of a pet.

Warning signs in addition to physical complaints might include difficulty separating from a parent, worry about something happening at school, reports of being bullied, difficulty focussing, slipping grades, a pileup of missed work or assertions that a teacher doesn’t like them.

The first step should be to reach out to the school, she said.

“Oftentimes the school team and the school psychologist and/or school counsellor on campus can be very helpful and trained in managing school refusal.” In a bullying situation, for example, they can develop a plan for getting a child back on campus and helping them feel safe.

In this case, an outside therapist would work with the parents and the school team to get the child back in school.

Mihalas urged parents to act quickly. “It’s incredibly important to intervene as soon as possible so the child can get back to school as soon as feasible. Otherwise, the behaviour and the emotionality gets more entrenched and more traumatic for the child and the family.”

IT’S IMPORTANT TO UNDERSTAND THE REASON FOR AVOIDANCE

According to research led by Kearney, there are four main reasons for school-refusal behaviour.

-To avoid something that sparks general anxiety or depression or physical feelings of distress; this often applies to younger children
-To avoid being evaluated in a social or academic fashion
-To gain attention from a parent or another person
-To obtain some kind of tangible benefit from being home, such as sleeping in or playing video games

Determining the child’s motivation will help you decide how to approach the problem.

Parents should not spend the day cuddling with their children or letting them watch television.

A good rule, Dalton said, is that the child shouldn’t do anything at home during the school day that they wouldn’t be able to do at school. “Boredom is our ally,” he said.

Mihalas suggested trying to create the atmosphere of a school day: Get them up and dressed at the usual time, eat lunch when they normally would and engage in schoolwork.

And it doesn’t have to be all home or school.

“Sometimes what we do is we have the kids go in for at least part of the day, and then work on anxiety management skills, and then get them in for the full day,” Kearney said.

“It’s always better if a child’s actually physically in the school building, even if it’s for a short period of time.”

The standard treatment for school refusal involves the parents as well as the child, Mihalas said, and uses CBT to address the student’s particular form of anxiety.

“The primary focus here is building skills, decreasing anxiety, building emotional tolerance, being able to problem solve, and then transitioning back into the school system, ultimately,” Mihalas said.

She said kids can build skills by learning to answer questions such as, “When I feel this way, how do I calm myself down? When I am triggered, what do I do? Who can I ask for help when a problem arises? What are the four steps that I can take to manage the problem?”

Dalton said he first gives kids “an owner’s manual for their nervous system” in which they learn to recognise disordered anxiety, when the fear is real but the danger is not.

The next step is exposure therapy, in which they learn that they are capable of handling the emotions they are avoiding by not going to school.

If a child has social anxiety and is afraid of embarrassment, for example, Dalton might encourage them to do something unusual during a treatment session, such as wear a funny wig or try to pay for something in euros.

“It is not only about the child, ever, when it comes to school refusal, because there are a lot of things that the parent can do to reinforce the school-refusal syndrome and the anxious behaviours,” Mihalas said.

Many kids who avoid school have parents who themselves deal with anxiety, Dalton said, and lean toward letting their child stay home to protect them from those feelings.

These parents need to learn that experiencing anxiety will not harm their children, he said.

“It’s a natural process of how we grow and how we learn about what it is that we can actually do.”

School avoidance is not about school, Dalton said. “It’s not about forgetting when the War of 1812 is, or how to carry the one. This is about using avoidance as a means of self-regulation.”

If parents can teach their children non-avoidant coping skills, he added, “the benefits will echo forever”.