LATACUNGA (AFP) – At least 15 prisoners died on Monday in the latest unrest inside Ecuador’s prison system, officials in the South American country reported.

The agency that manages Ecuador’s prisons, SNAI, gave the death toll in a statement which also said 21 people were injured in the clashes between inmates.

It had earlier announced that tactical units conducted operations to regain control of the facility, located in the Ecuadoran city of Latacunga.

The prison houses about 4,300 prisoners and is one of the largest in the country.

Violence in Ecuador’s prisons, where drug gangs vie for power, is often carried out with knives and sometimes involves beheadings. The violence has left more than 400 prisoners dead since February 2021.

On Monday, inmates climbed onto roofs while detonations were heard, according to television news footage. 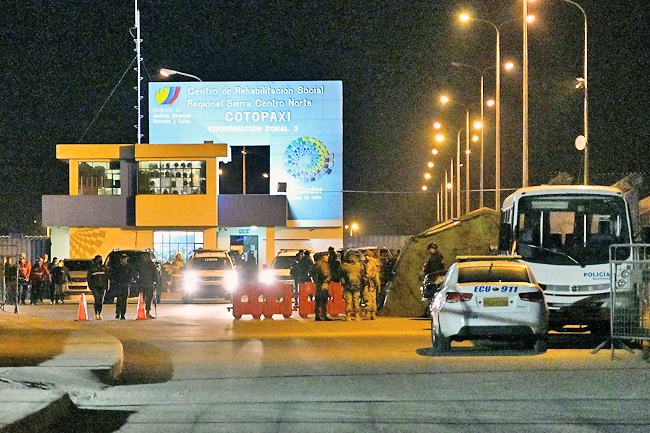 SNAI’s deputy director Jorge Flores told reporters that Leandro Norero appeared to be “among the victims”.

Norero, suspected of links to drug trafficking, became one of the inmate leaders.

Known by the alias “El Patron”, he was arrested last May for allegations of money laundering, in an operation in which USD6.4 million, 24 gold bars, firearms and ammunition were allegedly seized.

“Regarding the death of the defendant #LeandroN, #FiscaliaEc reports that after the corresponding identification experts will be able to confirm or not his death,” said the country’s prosecuting agency.

Military and police tactical units worked to regain control of the prison, SNAI said, in what provincial authorities called a successful operation.

According to official estimates, the country’s overcrowded prisons contain about 35,000 inmates, many of them members of gangs linked to drug trafficking.

A government committee noted in April that Ecuadorian prisons “are considered warehouses of human beings and torture centres.”

Bordered by Colombia and Peru, Ecuador serves as a departure port for drug shipments, primarily to the United States and Europe.