Art of noise: UK project aims to save lost sounds

LONDON (AFP) – The mostly defunct red phone boxes no longer attract much attention in London except from tourists. But Stuart Fowkes is thrilled to stumble upon one still in working order.

Its ring is one of the world’s disappearing noises that his pioneering “obsolete sounds” project is dedicated to preserving.

He whips out a hand-held recording device and swings into action, explaining, “I’ve always had sonic curiosity.

Over the past five years Fowkes’ Cities and Memories website has collected and remixed more than 5,000 sounds from 100 countries which are being archived by the British Library.

Now, his latest project aims to preserve sounds that are “just on the edge of memory”.

These sounds that we are “just about forgetting” are the ones that have the “greatest emotional resonance”, he told AFP.

“What I have been struck by is how people have responded emotionally to some of the recordings. 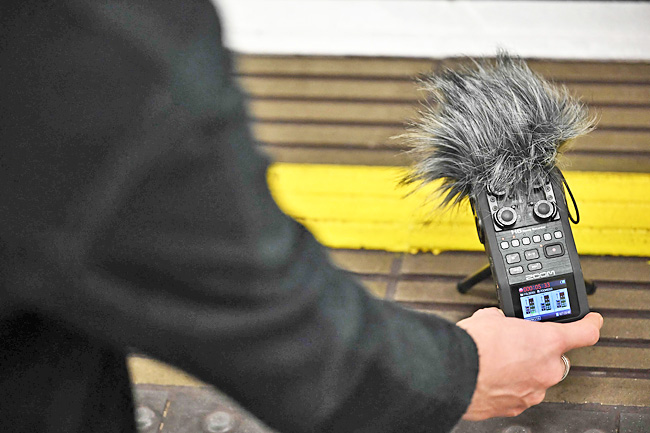 “You’ve got people who heard the sound of a Super 8 film camera and this reminded them of being in their living room in 1978 with their dad showing them home movies for the first time.”

The “obsolete sounds” project features more than 150 recordings collected from around the world, and also includes remixes of those sounds by musicians and sound artists.

Billed as the biggest collection of its kind, it includes everything from Walkman personal stereo cassette players and old video game consoles, to steam trains and vintage racing cars, as well as sounds that evoke the rapidly changing natural environment, such as crumbling glaciers.

“Before the industrial revolution, our sound environment – bells and horses’ hooves and manual industry – would not have changed much for hundreds of years,” said Fowkes.

“Today, the pace of change is ridiculous. Things that are only a few years old, like ring tones on mobile phones, already sound dated.”

Moving below street level down into London’s Underground train network, Fowkes gets to work again. A bit like the “trainspotters” who were once a familiar sight on the platforms of UK railway stations, Fowkes is a dedicated “soundspotter”.

But to him, there is nothing dull or uninteresting about the screeching of the train’s wheels scraping against the curves in the metal tracks or the clunk of the doors opening and closing.

“I’ve always been someone who listens to the world. As soon as I have a recording device in my hand I start to listen to the world kind of differently and hear things that other people wouldn’t necessarily notice or listen to,” he said.

The digital consultant launched Cities and Memories in 2015 and has drawn in some 1,000 collaborators across the globe.

“Every morning I wake up to emails with recordings from somewhere completely unexpected, like a beach in Bali or even the metro in Pyongyang,” he said.

Field recordings are “having a moment”, he added, with artists such as ethereal Icelandic singer Bjork using them in their music.

“It used to be seen as very niche, even trainspotter-like behaviour, but now anyone can make a decent recording on their phone and it’s becoming increasingly mainstream.”

Fowkes has been thrilled by the response to his project – but is keen to receive more, especially from African cities.

Anyone can contribute, he says, just by “sticking their mobile phone out of the window” and then visiting citiesandmemories.com.

In the meantime, he’ll keep on adding his own recordings, while admitting his dedication can sometimes be a source of mild irritation for his wife.