Are some processed meats worse than others?

CNA/THE NEW YORK TIMES – Joyous occasions often feature processed meats but when that indulgence extends beyond the occasional celebration, experts said that you should cut back.

“The evidence is quite convincing that regular consumption of processed meats is detrimental to health, including colorectal cancer, Type 2 diabetes and cardiovascular disease,” said Professor of Nutrition and Epidemiology and Chair of the Department of Nutrition at the Harvard TH Chan School of Public Health Dr Frank Hu.

Processed meats can include sausage, deli meats (such as bologna, smoked turkey and salami), pepperoni and even sauces made with those products. When meat is processed, it is transformed through curing, fermenting, smoking or salting in order to boost flavour and shelf life.

In 2015, the World Health Organization (WHO) announced that processed meat was “carcinogenic to humans”, citing “sufficient evidence” that it caused colorectal cancer. The World Cancer Research Fund International recommends eating little, if any, processed meat, and limiting red meat to about three portions (or about 340 grammes to 510 grammes) per week.

It’s important to limit intake of red meat even when it’s not processed because it’s tied to not only cancer, but also heart disease, stroke and an overall risk of death (In its 2015 announcement about processed meats, the WHO classified red meat as “probably carcinogenic”).

Experts can’t definitively recommend one type of processed meat over another because of the way research is currently conducted. “Most studies focus on highly consumed processed meats,” Dr Hu said.

So, because all types of processed meats get lumped together in most studies, he added, “it’s difficult to make a conclusive statement regarding which processed meats are better or worse than others”. 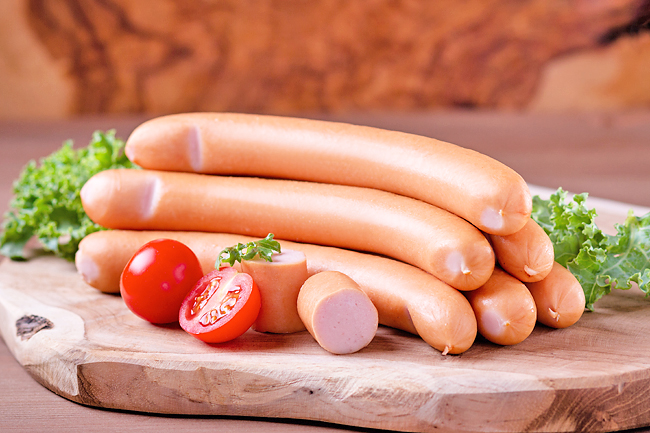 And, he noted, people who tend to eat one type of processed meat tend to eat others, so it’s challenging to tease out the effect of one over another.

“But we don’t have evidence to support this,” he said, so until more research is done, treat processed poultry and fish products with similar caution.

One reason for such advice is that the main issue seems to be the processing itself, rather than what the processed meat is made from, said Senior Scientific Director of Epidemiology Research at the American Cancer Society Marji McCullough. The act of curing or preserving with nitrates and nitrites, which can create carcinogenic chemicals in food, might contribute to the cancer risk, McCullough said.

Another possible variable, she added, is that cooking meat at high temperatures can form additional carcinogens. This includes cooking meat in direct contact with a flame or hot surface, like when barbecuing, grilling or pan-frying.

Aside from cancer risks, all processed meats tend to be high in sodium, so that is “an important factor”, Dr Hu said. Excess sodium intake can increase the risk of high blood pressure and cardiovascular disease.

Processed meats have also been linked with an increased risk of developing Type 2 diabetes and dementia. One large 2021 study performed in Britain, for instance, concluded that for every additional 25 grammes of processed meat in a person’s daily diet, the risk of dementia increased by 44 per cent, and that of Alzheimer’s disease increased by 52 per cent.

Assistant Professor of Medicine at the UCLA Center for Human Nutrition Dr Vijaya Surampudi said that the concern with processed meat is that it can increase inflammation in the body, in part by altering the microbiome of the gut.

“The gut bacteria interact with our immune system and eventually lead to chronic inflammation,” she said, which can affect blood pressure, blood sugar and cholesterol, increasing the risk of chronic disease and even death.

“A plant-based diet will be much more preventive at reducing risk,” Dr Surampudi said. “It doesn’t mean you have to go 100-per-cent vegan or vegetarian,” she said, just that the majority of your diet should come from plant-based sources. This way of eating is also typically better for the environment.

So, does this mean it’s better to eat plant-based processed meat alternatives?

Ultimately, it depends on what the products are made of – whether they are fully plant-based analogues or products made from a blend of meat and vegetables. But, he added, “of course, a more optimal diet should be based on minimally processed plant-based foods”.

For products with labels like “organic”, “no antibiotics”, “fed a vegetarian diet” or “humanely raised”, Dr Surampudi said, “I do think if people can choose lean cuts, organic and vegetarian feeds – if you’re able to afford it – that’s better, because whatever the animal you’re consuming ate, that gets concentrated in that animal’s body, and then we consume it.”

This is an important factor to consider with all animal-based foods, processed or not.

In the end, the processed meats that are worst for you are the ones you might find yourself eating routinely, rather than those you eat as an occasional treat. Which means: Every now and then – at a family barbecue, for instance – go ahead and have a sausage. Just don’t make it a regular habit.