DNIPRO, UKRAINE (AFP) – A day after a Russian missile tore into the Dnipro tower block where Ukrainian refugee Roman Zhuravsky was living, he feared the worst. “My mother hasn’t been found yet,” he said.

“But the likelihood, given that five floors collapsed above her…”

More than two dozen people are still missing after the missile strike partially collapsed the nine-storey building. So far, 30 are confirmed dead.

The Zhuravsky family had hoped to find safety when they moved into the building in central Ukraine at the beginning of the war, away from the embattled eastern Donetsk region.

They had all had planned to go to church on Saturday, the day of the strike, but Zhuravsky’s mother, as she was feeling ill, in the end decided to stay at home.

“I heard a strong explosion…,” said Zhuravsky, standing next to the still-smouldering ruins.

“Everyone started calling me, saying that this is your house,” he said, so he rushed home.

“I saw a terrible picture, everything was covered in smoke and dust.” 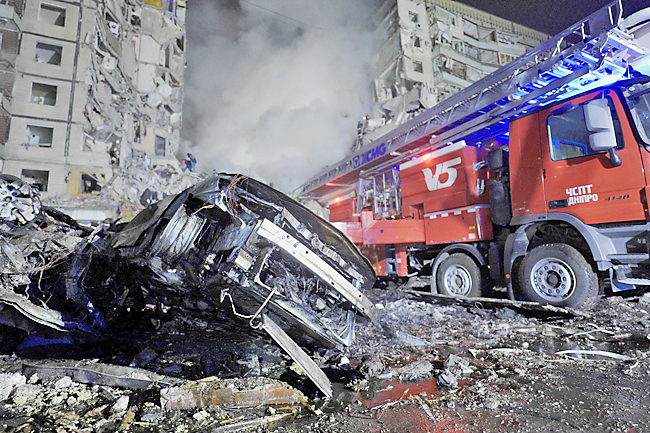 Zhuravsky visited every nearby hospital in the hope of finding his mother there, but to no avail.

For now, he said, he had the comfort of strangers.

He was overwhelmed, he said, with the support he had received, including calls from people who had been through similar experiences, all offering to help.

“I would like tell each and everyone how grateful I am,” he added.

As he spoke to AFP, volunteers were passing out food and warm drink from nearby tents, while the rescue teams kept up their work going through the rubble.

Among them was Larysa Borysenko, the head of a rescue canine unit.

The search dogs had helped to recover six bodies, she said but they were also hoping to find survivors.

“We have been working here for 19 or 20 hours,” said Borysenko. “Without sleep and without rest”.

So far 39 people, including six children, have been evacuated from the collapsing tower block, emergency services said on Sunday evening.

Among them was Kateryna, 17, who was at home with her dad when the missile struck.

“I fell into a stupor, I didn’t even know what to do. I started crying and screaming a lot,” recalled Kateryna, wrapped in a powder-blue puffer jacket and hat.

Rescuers heard the father and daughter shouting for help and slowly evacuated them.

After a short night at a friend’s flat, she was back with her mother Natalia to look for her beloved pets.

Next to her, Natalia had pulled out photos of her two cats on her phone and was showing them to a rescuer.

“Beautiful cats… we love them so much. There are two of them. Busya and Kuzya,” Natalia said.

Many others had gathered, anxious to hear news of loved ones or to grab a few belongings.
Some were hugging, others carrying small suitcases.

Suddenly, Natalia jumped, a rescuer was bringing back one of her cats.

“Oh Busya, our little hero!” she said, wrapping a blanked over her cat, who loudly meowed.

“They haven’t found the second one…”