THE WASHINGTON POST – Anthony Marra labours under the most benevolent curse that can befall a writer: When he was 28 years old, he published A Constellation of Vital Phenomena, an astonishingly great debut novel. Manipulating time and tone with hypnotic effect, sweeping from tragic to absurd with majestic ease, Marra told the stories of folks caught in a war-torn Chechen village. A Constellation of Vital Phenomena won the inaugural John Leonard Prize for Best First Book from the National Book Critics Circle, and raves piled up around the novel like ticker tape.

Now, almost a decade later, Marra has published his second novel, a story set before and during World War II called Mercury Pictures Presents. The author’s fans, who include former president Barack Obama, will recognise his elegant resolution of tangled disasters, his heartbreaking poignancy, his eye for historical curiosities that exceed the parameters of fiction. But the emotional range here is narrower, the record of human cruelty more subtle.

And if Mercury Pictures Presents doesn’t generate the impact of A Constellation of Vital Phenomena, well, that’s an impossibly high standard.

The novel opens in Hollywood in 1941. There’s a screwball comedy playing, but it’s not on the screen; it’s in the corporate office of Mercury Pictures. Studio founder Artie Feldman can’t believe his bald spot has finally grown too large to conceal. Older readers will recall Carl Reiner on The Dick Van Dyke Show when Artie suggests, “Maybe the toupee shrunk.”

Six more toupees – all adorned with pet names – sit behind his desk on wooden heads like furry Oscars. “Artie had become convinced that each one crackled with the karmic energy of the hair’s original head, unrealised and awaiting release.” 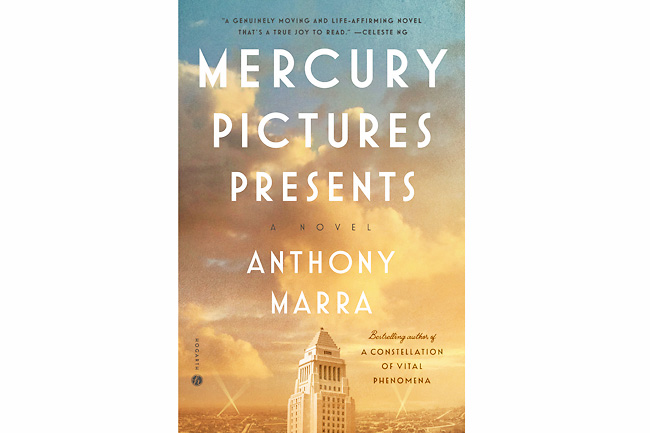 But Mercury Pictures faces problems even more severe than male-pattern baldness. The Senate Investigation into Motion Picture War Propaganda has “invited” Artie and other studio heads to Washington for a show trial to defend their films and their patriotism.

Worse, the puritan who controls the Production Code Administration is increasing his efforts to make pictures “gratuitously inoffensive,” lest the snow-white innocence of American viewers be stained.

Artie’s principal defender and the feisty central character of this complicated novel is his deputy producer, Maria Lagana. She’s a 28-year-old Italian American with “the talents of a general, diplomat, hostage negotiator and hairdresser”. She has a special knack, Marra explains, “for smuggling subtext past the border guards of decorum at the Production Code Administration.” When Artie tells Maria she can have a producer’s credit if she gets their latest film past the censors, she takes the challenge.

Marra unspools this period comedy with so much old-time snappy wit that Mercury Pictures Presents should come with popcorn and a 78-ounce Coke. But then, suddenly, the scene shifts to a far darker era – the first in a series of manoeuvres indicating the thin membrane separating humour and horror in this novel.

What feels at first like a charming flashback to Maria’s youth in Rome is, in fact, an explanation for her abiding sense of guilt. As a strident teenager, she acted rashly to protect her father in a way that accidentally led to his arrest under the fascist reign. While Maria escapes to the United States (US), her dad remains behind and becomes embroiled in a convoluted murder plot that ricochets through several lives.

With these tangled events, Marra demonstrates his remarkable ability to capture the intricate cruelties of political and social collapse. Borrowing the tropes of spy thrillers and police procedurals, he transcribes a web of chaos and kindness that carries a few lucky souls through the fires of Italy’s collapse. Along the way, he sets down the lines of future coincidences so outlandish that only history could validate them.

When Marra switches back to the US, that frightening vision of Italian fascism serves as both contrast and caution. As the country enters the war, Mercury Pictures joins the effort to convince Americans of the purity of their cause and the villainy of their enemies. But, of course, many of those propaganda films are written, directed, produced and even performed by the very kinds of people that the US government is busy demonising. These “resident aliens” working for the studio cannot legally travel more than a few miles from their homes, and they constantly risk harassment and even assault, yet here they are glorifying the country’s cherished values of equality and liberty. (In one of several brilliant and bitterly funny set pieces, a talented Asian American actor spends the day with Bela Lugosi considering the psychic costs of portraying “foreigners” for White audiences.)

The novel’s most fascinating move is the way it teases out the complications of realism – particularly in the service of propaganda. Marra describes studio filmmakers struggling to shoot footage of actual battle scenes that looks convincing. Despite their best efforts, the technological limits of the cameras make the documentary reels appear tiny and confusing.

The only solution, ultimately, is to fake the carnage with re-enactments. “Everywhere”,

Marra deadpans, “there was a pent-up hunger for what resembled reality”.

And in one of the novel’s many bizarre-but-true episodes, that idea gets turned on its head: Deep in the Utah desert, the army builds a precise simulacrum of a Berlin neighbourhood to practice raining actual carnage down on the German capital.

What’s real is rendered fake; what’s fake is passed off as real. Who can maintain a sense of moral clarity in such a national house of mirrors?

But this novel isn’t sustained merely by its surreal images, its archival discoveries or even its sharp critique of American hypocrisy. What matters, ultimately, is Marra’s ear for catching the subtle grace notes in ordinary people’s lives. If reading Mercury Pictures Presents sometimes feels like watching several movies simultaneously, you can trust that the novel will eventually resolve into focus with a moment of radical compassion that emits no more noise than a sigh.