BOSTON (AFP) – In a storied corner of Boston, one of America’s newest families is finding its feet months after fleeing Afghanistan: Israr and Sayeda are starting work, studying English and setting up home to welcome their first-born child.

But like many of the tens of thousands of Afghans evacuated after Kabul’s fall to the Taleban, the young couple – who asked to be identified by first names only – are also taking steps to ensure the rug doesn’t get pulled out from under their new life.

Though he worked as a United States (US) Army interpreter, Israr and his wife are in the US on what is known as humanitarian parole, a “tenuous legal status,” according to resettlement organisations, that offers only two years residence.

After an arduous, months-long journey that took them from Kabul via Qatar, Washington and a military base in Texas, the pair settled early this year in Boston’s Charlestown neighbourhood, where they were taken under the wing of a couple they now call their second “mama and papa.”

“My papa is working on it,” 26-year-old Israr said of his immigration status. “He got me a pro bono lawyer.”

Israr had carefully packed all his documents before heading to Kabul airport as the chaotic evacuation unfolded in late August. 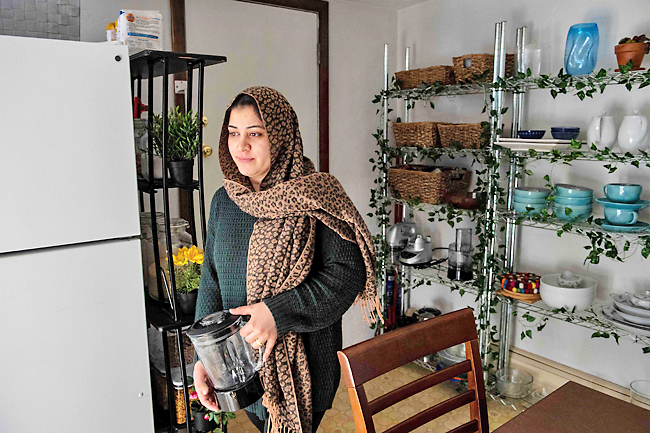 But after nerve-racking encounters with Taleban at the airport entrances, Sayeda, 23, hid some on her person, hoping they wouldn’t search, or beat a woman.

In the event, she was beaten to the point she couldn’t walk. Israr, also injured, abandoned the bags and carried her.

“I lost my luggage, my important documentation, my money, my clothes, my everything,” he told AFP.

They finally made it onto a plane with only his passport, a handful of documents and the clothes on their backs.

Now the couple face an uncertain path to permanent residency.

For the time being, the main avenues are the Special Immigrant Visa (SIV) – reserved for those who aided the US government – and asylum. Israr said completing his SIV application is proving complicated, but asylum comes with other challenges.

While he describes “threats” and “blackmail” from the Taleban, a credible fear of persecution is not always easy to prove.

Resettlement of Afghans to the US wound down to a trickle by late February, but as focus turns to the Ukraine war and a new refugee crisis, advocates are urging lawmakers to ensure Afghans can stay for good.

Democratic Senator Amy Klobuchar has said she is working on legislation and Krish O’Mara Vignarajah, head of the Lutheran Immigration and Refugee Service (LIRS) said she’s met with sympathetic Republicans too.

LIRS and others are advocating for Congress to pass an Afghan Adjustment Act, which would give Afghans a pathway to permanent US status.

“To us, it’s a no brainer,” said Vignarajah, but she is still braced for “challenges” ahead.

For now, asylum is a “high threshold to meet,” she told AFP.

To establish a credible claim, Vignarajah explained, requires a significant amount of documentation.

“That’s a potential Catch-22,” she said, with many people encouraged to destroy evidence of their links to the US to avoid Taleban retribution.

“That same documentation that might be a death sentence in Afghanistan could be the key to winning an asylum case here in the US.”

Thielman told AFP many may find themselves without a pathway to permanent residency on the same grounds.

“They’ve been vetted, they’ve gone through our cultural orientation program, their kids are now in school, they’re getting jobs – to rip these people out of this country and to give them this uncertainty is very unjust,” he said.

Another hurdle is that the US resettlement infrastructure faces “severe” backlogs of more than 10,000 SIV applications and roughly 600,000 pending asylum cases, said Vignarajah.

The impetus to create a new pathway is amplified by the deteriorating humanitarian situation in Afghanistan, where aid agencies have said more than half the population faces
hunger.

Israr and Sayeda are relieved and grateful to be safe in the United States with “another chance.”

In the calm of their bright, cosy apartment, Sayeda blends breakfast smoothies before going to work, she at a daycare and Israr at a local Whole Foods.

And yet they are wracked with worry for those left behind.

Israr is helping both his and Sayeda’s relatives in Afghanistan, as jobs disappear and food prices skyrocket, while also preparing for their baby’s arrival and to pay rent once it is no longer covered by the resettlement organisation.

“It’s a lot of responsibilities on my shoulder,” he said.

But he holds out hope, that perhaps “one day my family is coming here.”