THE WASHINGTON POST – Thomas Piketty’s monumental Capital in the Twenty-First Century (2013) offered one of the most thorough and illuminating studies of capitalist economics since Karl Marx published the original Capital 150 years earlier.

Despite the plainest of covers and roughly 700 pages of erudite and often dense analysis, Piketty’s Capital was a runaway hit – selling more than 2.5 million copies worldwide.

The book appeared at a crucial moment. Economic discontent had been brewing since the financial crash of 2008-2009; many blamed economic elites and their allies in government for having pushed the world’s banking system (and the welfare of tens of millions) into an abyss.

In 2011, Occupy Wall Street provided this anger with a focus and a movement, facilitated the emergence of political leaders such as Elizabeth Warren and Bernie Sanders, and generated a hunger for understanding the mechanisms of capitalism capable of producing deep economic inequality and injustice.

Piketty’s tome provided the insight into capitalism’s inner workings that many were so urgently seeking.

Capital in the Twenty-First Century focussed most of its attention on the advanced industrialised world of Western Europe and the United States (US). Piketty’s even longer sequel, Capital and Ideology (2019), deepened that original analysis while expanding its scope to include much of the rest of the world, with a focus in particular on how slavery and colonialism abetted the triumph of the capitalist West. 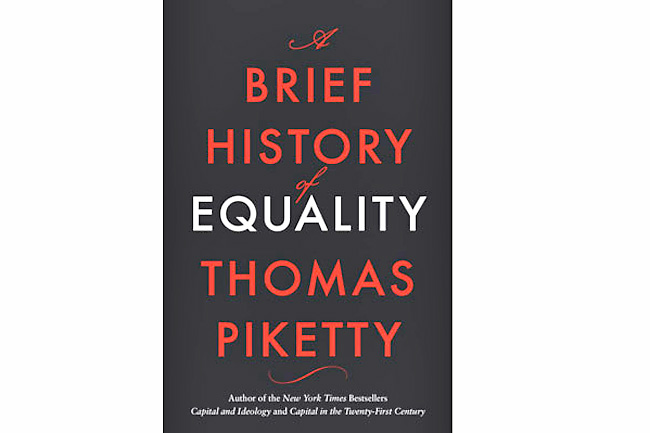 While not quite a manifesto, A Brief History of Equality offers a sustained argument for why we should be optimistic about human progress, which Piketty defines as “the movement toward equality”.

Across the last 200 years, he notes, life expectancy has increased from 26 to 72 years. “At present,” he adds, “humanity is in better health than it has ever been; it also has more access to education and culture than ever before”.

Piketty is acutely aware of the disparities in the welfare of individuals both within advanced industrial societies and between the Global North and the Global South.

But his reading of the history of the 20th Century allows him to think that these 21st Century inequalities can be narrowed, in part because “the march toward equality in all its forms” is irrepressible and in part because past generations of reformers lit a path that still illuminates the way forward.

Piketty focusses in particular on the revolution in government that liberal and left forces in the industrialized West propelled between 1910 and 1980.

Across these decades, he writes, Western societies built robust welfare states, invested heavily in education and other public goods, and considerably narrowed economic inequality – and thus the gap in life chances – between rich and poor. Piketty calls this transformation an “anthropological revolution”; for him it represents a social democratic triumph.

Taxation was the revolution’s key instrument. In country after country, total tax receipts exploded, from less than 10 per cent of national income in 1910 to between 30 and 40 per cent by the century’s middle decades.

These tax regimes were highly progressive and redistributionist, with the United States (surprisingly) leading the way by imposing an average top tax rate of 81 percent on the highest-income earners between 1932 and 1980.

The triumph of social democracy in the 20th-Century West has imbued Piketty with the confidence that humanity can transition to a new stage of equality. An engaged and clearheaded socialist thinker, Piketty sets forth in A Brief History of Equality one of the most comprehensive and comprehensible social democratic programs available anywhere.

His proposals include public financing of elections, transnational assemblies to complement national legislatures, a global tax of two percent on all individual fortunes that exceed EUR10 million, involvement of workers in the management of large enterprises (to promote “participatory socialism”), and the revision of global treaties to ensure that the international circulation of capital will enhance rather than hamper the pursuit of key goals such as reducing greenhouse gases and easing economic inequality between the Global North and the Global South.

Piketty understands that none of his proposals will be easy to implement. But his reading of politics in the 20th-Century West gives him reason to hope.

Then, he argues, progressive movements – women demanding the vote, workers struggling for industrial rights, social democratic parties vying for victory at the polls, minorities fighting for civil rights – triggered a vast political transformation. Protest movements of this sort, appropriately adjusted for the needs of 21st-Century citizens, can achieve similar results.

To make his case for the efficacy of progressive politics, however, Piketty ignores a sobering insight offered up in his Capital in the Twenty-First Century.

In that work, Piketty argued that the 20th Century’s social democratic triumph did not arise from the work of progressive movements alone.

Equally important, and perhaps more so, was the destructive force of two global wars. “It was the chaos of war,” Piketty then wrote, “that reduced inequality in the twentieth century… It was war, and not harmonious democratic or economic rationality, that erased the past and enabled society to begin anew with a clean slate.”

The First and Second World Wars to which Piketty refers killed nearly 100 million people, destroyed production facilities on an immense scale, stripped European powers of their income-generating colonies, and everywhere destabilised both the fortunes and the thinking of economic elites.

The catastrophe of war, Piketty argued in his 2013 work, gave social democracy its chance to triumph in the West.

Hence a key question for Piketty’s 2022 book: Can reducing inequality in the 21st-Century world on the same scale as in the 20th Century West be accomplished without another large war, or a pandemic far more destructive than the one we are living through, or a climate catastrophe of the first order? One certainly wants to answer with Piketty that it can. He has laid out a plan that is smart, thoughtful and motivated by admirable political convictions.

But a plan of this sort, as Piketty himself showed in Capital in the Twenty-First Century may not suffice, even when backed by a phalanx of progressive movements.

Vast and cruel destruction of life and property, Piketty once wrote, was the critical prelude to the 20th century’s social democratic triumph.

Let us hope the world will not require similar death and despair to thrust into existence a 21st-Century era of economic and social reconstruction.