AP – It was all over the fashion runways. Women’s Wear Daily raved about Armani dresses in this material. Harper’s Bazaar called it one of 2022’s biggest trends. At Britain’s film awards, celebrities partied in Louis Vuitton, Ralph Lauren and Gucci versions. It’s even found its way down to casual wear, in jeans, T-shirts and slouchy overshirts.

Once the luxurious material of nobility, velvet’s now a fashion favourite at both the private-label and mass-market level.

And as often happens, what rides high in fashion ends up doing the same in home décor.

“As an interior designer, I love infusing fashion trends in my designs,” said Cincinnati-based Amy Youngblood. “Many of my clients have come to recognise that both interior design and fashion give you the freedom to creatively explore and develop a better understanding of yourself and others around you. Fashion is the driving force which interior design follows, and finds its inspiration from.”

But should we say velvet is “trending”? Here’s executive editor at HGTV Magazine Jessica Dodell-Feder: “I was talking to our home and style directors about this, and honestly, we all feel like velvet never really went away. It’s one of those classic fabrics that add texture and depth to a space without introducing pattern. And that’s cool,” she said.

For interior designer John McClain in Orlando, Florida, and author of the new The Designer Within (Gibbs Smith), the plush fabric is on speed dial in his little black book of upholstery.

“Velvet is a mainstay in my designs,” he said. 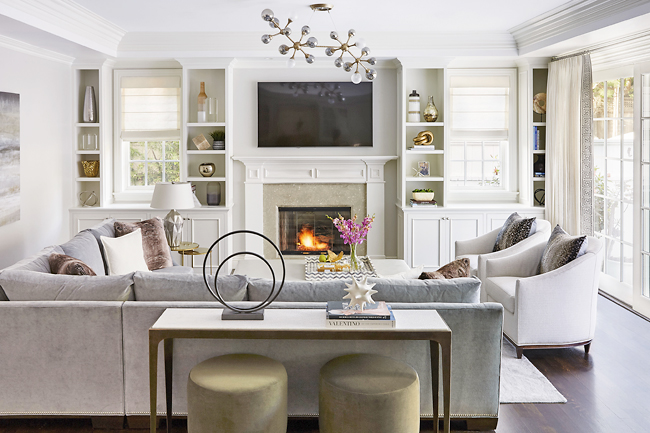 He’s done a home theatre wall in velvet for a client, and said it has excellent sound abatement properties. He called the fabric “our seating cover of choice”.

Velvet, he said, can offer deep colour and a rich feel that “shines at a dinner party.” At the same time, it can be much more resilient than people assume – particularly if you get a commercial-grade synthetic velvet.

“Nobody knows the difference, because the ‘hand,’ or feel, is so soft. It feels as sophisticated – and as nice – as its natural cotton counterpart,” he said,
Dodell-Feder agreed. “For most families, performance velvet will probably do the trick. It’s not as luxe as real velvet, but it’s easier to care for and has a similar plushness. Because I have a dog, when I bought a sofa for my living room, I went with performance velvet,” she said.

And designer Jillian Hayward Schaible in Milton, Massachuetts, also cautioned clients to select the right kind of plush velvet for their furniture.

“It can add lovely depth in both texture and sheen on any piece, from furniture to accents.

Domino magazine’s editors recently coined the name “Plazacore” for a style that nods to the Manhattan hotel that was home to the children’s-book character Eloise. It’s evoked by accessories like crystal, polished metallics and cushy velvet throws.

As for colour, McClain said he typically goes for light neutrals – “yes, even in a family with kids” – but that sometimes “we also love the punch of a colourful velvet. It’s a statement maker.”

But the magazine did a recent shoot of a bed with a pale pink velvet pillow. Said Huh: “There’s something about the way velvet catches the light that gives any colour beautiful dimension.”

And designer Nicole Fisher placed a champagne-hued, crushed-velvet bed in a home in New York City’s West Village, for a sophisticated yet comforting spot. Then, in the TV room, she placed a pair of ottomans in a soft but vibrantly patterned velvet to riff off the space’s sapphire-blue walls.

“There are so many ways to incorporate that cosy vibe with velvet,” she said. A look at what some retailers are offering:

For big pieces, check out Anthropologie’s Juneau buffet, a statement piece with a swanky, speakeasy vibe. It could be an entertainment space with its abundant storage, Carrara marble top and brass accents. Available in blush, deep turquoise or moss-green channelled velvet.

The retailer’s other offerings include the Lena Elowen chair. Antique French and Italian botanical tapestries were the inspiration for the velvet upholstery.

And for an unusual spin on the material, consider Artaic’s stunning mosaic tile designed to emulate the look of crushed velvet. It comes in two colourways: emerald, and cabernet.