All about them nails

CNA – You’ve broken your fingernail again. As you’re wincing with pain, you’re probably thinking: What possible purpose can these keratin coverings have in the first place?

And you don’t even want to get started on the nails on your toes. Other than getting banged, bloodied and bruised, they don’t appear to do anything at all.

Whether you’re unaffected by your nails (they’re just, well, there) or obsessed with the latest nail art, one thing’s for sure: Nails are one of the features that distinguish primates, including humans, from other mammals.

When early humans first picked up stone tools 2.5 million years ago, it set us down the evolutionary path that equipped us with broader fingertips, according to a biological anthropologist at the University of Wisconsin-Madison Dr John Hawks.

These were better suited for grasping stones than gripping branches. Over time, those fingertips got even broader and soon, nails began to replace claws.

So, essentially, your nail is a flattened claw, according to Dr Hawks. (Incidentally, your pet dog’s or cat’s claws are also made of keratin like your nails).

And while you may no longer need to climb trees and dig holes, you now require fine motor movements to separate pages in a book or pick out singular strands of hair.

And that’s where your fingernails come in handy. As for your toenails, think of them as reinforced caps that protect your toes’ sensitive tips. 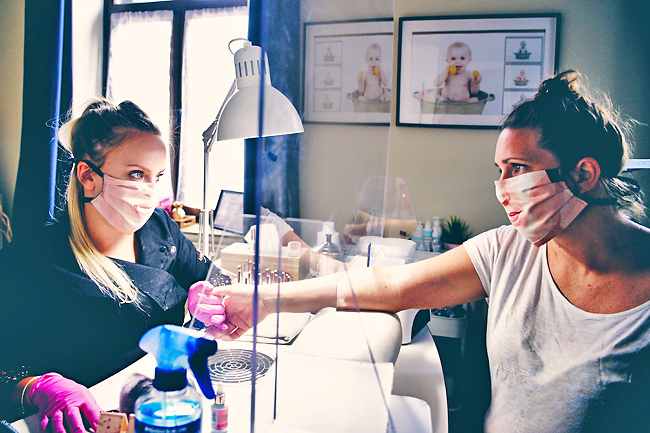 Your nails are well supplied with blood and can even maintain the blood flow when you’re gripping something very tightly.

And as hard as these keratin coverings feel, they are as sensitive as your fingertips owing to an intricate network of nerves underneath each nail. Here’s a closer look at your nails’ anatomy:

Nail root: Also known as the germinal matrix, this is the nail factory. You might see a glimpse of it as a white, crescent shape found at the base of the nail known as the lunula, but it actually extends several millimetres into the finger.

Nail bed: Otherwise known as the sterile matrix, the nail bed contains blood vessels, nerves and melanocytes that produce pigment. Healthy nail beds look smooth and do not have ridges or splits.

Nail plate: This is the actual nail and consists of translucent keratin.

Cuticle: That’s the thin bit of skin covering the nail plate that manicurists push back. It is also known as the eponychium.

Paronychium: This refers to the fleshy folds on both sides of the nail. It is where hangnails, ingrown nails and paronychia, a skin infection around the nail, occurs.

Hyponychium: This is the area underneath the nail, where the keratin ends and the skin of your finger begins. It is also where it hurts a lot when you clip your nail too short.

As for the growth rate, fingernails grow faster than toenails, said Dr Chuah Sai Yee, a senior consultant with National Skin Centre: An average of 3.47mm a month for fingernails. The nails on your dominant hand are also said to grow faster as it is thought that its risks of injury and trauma are higher and the body naturally sends more blood and nutrients for repair.

But in general, the pinkie’s growth rate (3.08mm a month) is the slowest, said Dr Chuah.

Conversely, the fastest grower is the nail on your middle finger.

As for the toenails, they grow at a much slower rate: A monthly average of 1.62mm. The nail on the big toe is the quickest growing with an average of 2.10mm a month, she said.

Your nails are subjected to a lot of wear on a daily basis such as typing, biting, picking, using drying hand sanitisers, getting gel polish done, stubbing your toes on furniture, wearing ill-fitting footwear or even accidentally slamming a drawer or door on your fingers.

We can’t name all the damage and injuries that hurt your nails but here are some common ones you might have encountered and how long you can expect your nails to heal:

Accidentally stubbing your little toe on furniture is more common than you care to acknowledge.

“The little toe is the most prone to injury because of its location on the outside of the foot,” said Dr Chuah. In most cases, it is normal to experience some bruising and even some blood under the toenail, she said.

The same damage can also be sustained from ill-fitting footwear such as hiking boots or running shoes that are too small, or even getting your fingers slammed in the drawer or door.

It can be painful, swollen and red initially but these signs will abate, said Dr Chuah.

But if the pain is severe and does not go away, see the doctor immediately, especially if it is difficult for you to walk or put weight on the foot – you might have a broken toe, she said.

Most of the time, the bruising is mild and doesn’t require treatment as “the blood will gradually be resorbed by the body”, said Dr Kong Yan Ling, a dermatologist with Dermatology & Surgery Clinic.

“If the bleeding is severe, the pressure from the collection of blood may cause the nail to lift off the nail bed”.

Damage control: If the pain persists, Dr Chuah suggested the RICE method: Rest, ice, elevation and compression by bandaging it.

“Most bruises will clear up within a couple of weeks,” she said. In the meantime, wear open-toe footwear during the healing process to prevent further damage, she added.

However, if the bleeding is severe or extensive, see a doctor “as the blood would need to be drained via a simple medical procedure called trephination”, said Dr Kong.

“This would help to relieve the pressure on the nail bed and reduce the pain experienced.”

In fact, the doctor may also advise to remove the nail if it is badly damaged. “Following the removal of the nail, the doctor will inspect the nail bed for cuts, which would require stitching if present,” said Dr Kong.

How long to heal: In the worst-case scenario, where your entire nail is ruined, you can expect to take an average of four to six months to grow a new one completely from the cuticle to the tip, said Dr Chuah.

A toenail can take up to 18 months to completely regrow, said Dr Kong.

These painful situations on the big toe tend to occur more frequently in those with sweaty feet, according to the United Kingdom (UK) National Health Services (NHS). Older people may also be prone to ingrown toenails because toenails thicken with age.

A number of factors can make you more prone to the situation such as angling the cut of your toenails down the sides (it can encourage the toenail to grow into the skin), ill-fitting footwear and socks, injury (stubbing your toe or dropping something heavy on your toe) or just genetically predisposed to curved toenails.

You’ll know you have an ingrown toenail when putting on your shoes is painful. It feels tender, swollen or even hard. There may also be pus, bleeding or skin growing around the toe.

Damage control: If there isn’t an infection (no warmth, pus, redness and swelling), try soaking your feet in warm water for 15 to 20 minutes, three or four times a day, advised Healthline.

Then, push the skin away from the toenail edge with a cotton ball soaked in olive oil. After that, apply an antiseptic cream to prevent infection.

But do not pick at your toenail or cut it, advised the NHS. And certainly don’t wear tight, pointy shoes; wear wide, comfy shoes or sandals instead. If this home remedy doesn’t work after trying it for a few days to a few weeks, see a doctor, noted Healthline.

Similarly, get medical help if the pain worsens or if you find it difficult to walk or even wear shoes.

If there is infection, surgery to remove the toenail may be required and sometimes, only the part that digs into your skin is removed.

Complete removal is sometimes done when the ingrown toenail is caused by nail thickening triggered by a fungal infection.

How long to heal: For partial nail removal, it could take two to four months for your toenail to grow back, according to Mayo Clinic. Toenails take about 12 to 18 months to grow back, said Dr Chuah.

If you love the shiny, crisp look of freshly manicured or pedicured nails that lasts and lasts, you would have tried gel polish.

But they have their downsides though: Gel polish can damage your natural nails in more ways than one. For starters, leaving it on for too long can make the polish harder to remove, said Dr Kong.

“The manicurist might end up having to scrape and peel the polish off more forcefully. This will, in turn, cause more damage to the nails.”

Two, “as your nails grow, the extra weight of the gel polish can pull them off the nail bed, resulting in separation of the nails from the nail beds”, she said.

Three, the frequent application and removal of gel polish can cause weakened and unhealthy nails, “which present as chipped, peeling and thin nails, dryness and also white spots on the nails”, said Dr Kong.

Damage control: Don’t keep the gel polish on for more than two weeks, said Dr Chuah.
“Some may recommend one week’s break from eight weeks of back-to-back gel nails to allow your natural nails to rehydrate and repair the underlying structure.”

During your nail polish holiday, apply a moisturising product such as petroleum jelly or cuticle oil to your nails and cuticles several times daily, she advised.

“This will minimise brittleness and help prevent your nails from chipping.”

This is also the time to trim down your nails as nails damaged by gel polish tend to be brittle, said Dr Kong.

“Trimming them down to a manageable length will prevent them from breaking off. Use a nail buffer to ensure that the nail edges are even, as uneven ridges can be prone to tears.”

How long to heal: In the worst-case scenario, where your entire nail is ruined, you can expect to take an average of four to six months to grow a new one completely from the cuticle to the tip, said Dr Chuah.

A toenail can take up to 18 months to completely regrow, said Dr Kong.