THE WASHINGTON POST – When we first encounter Sandy Gray in Companion Piece she is in a sorry state, beyond caring, even about a bit of wordplay, though all her life she’s “loved language, it was my main character, me its eternal loyal sidekick”. So it’s a measure of her recaptured mojo, or more likely of Ali Smith’s unfailing wizardry, that by the end of this brief novel the mere word “hello” had me near tears.

Coming on the heels of Smith’s seasonal quartet, which somehow kept up with the blitzkrieg of current events, Companion Piece takes place in our pandemic-inflected world, an all-too-familiar territory that Smith characteristically renders wonderfully strange. This she does, in part, by blending Sandy’s 21st-Century story with another set in the plague-haunted England of the late Middle Ages.

Actually, the story’s already pretty strange by the time our medieval heroine, a girl with a bird – specifically, and significantly, a curlew – on her shoulder and a smithy’s tools in hand, mysteriously appears in our present-day heroine’s house. We’re prepared for a modicum of magic from the start, when we find Sandy entertaining Cerberus, the mythical three-headed guard dog of the underworld. This, under the nonplussed gaze of Shep, the dog Sandy is taking care of for her father, who’s in the hospital – not the virus, she is quick to say, heart stuff – though of course the virus infects everything.

What sets the plot in motion, or at least starts Sandy out of her doldrums, is a late-night call from a woman she hasn’t spoken to for decades: Martina Pelf has had a peculiar experience that wants deciphering, and so she thinks of Sandy, a college acquaintance who “knew how to think about things that everybody more normal would dismiss as a bit off the planet.”

Martina’s story involves her transporting the 16th-Century Boothby Lock, “a very important historical artefact and a stunning example of workmanship in blacksmithery”, for a museum and ending up in a locked room in an airport where a bodiless voice says to her, “Curlew or curfew.” Then it adds: “You choose.” 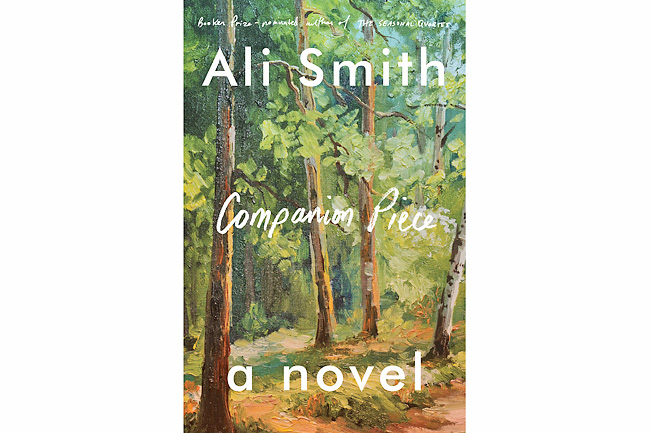 Unpack that. Well, Sandy tries. And for her trouble somehow ends up with the whole weird Pelf family descending on her, maskless, prompting her to flee to her father’s house with Shep. The accumulating Pelfs, with their presumption of Sandy’s interest, their insouciant appropriation of her house, and their acronym-peppered talk (en bee dee = no big deal, eg) give the book a funny farcical momentum, against which Companion Piece’s other stories incidentally unfold.

There are glimpses of Sandy’s life with her father, going back three hours, 12 hours, two years, three decades, half a century; stories of her errant mother as a child and as a woman on the verge of leaving; and the case of the girl and her curlew, who was not a vision, Sandy insists to Martina, but “a real person in my house, really stealing, really wasted, really filthy, really strong-smelling, really hurt, and with a burn on her collarbone that was really weeping.” That visitation provides an outline, and Martina supplies footnotes, for the full tale told later, of an orphan taken in by a blacksmith and his wife and taught the craft but abused and cast out when her mentors die, forced into vagrancy, a crime according to the laws of her plague-ridden time. All these hundreds of years later, might the brilliant Boothby Lock be her work?

Sandy, like her author, is a word person (an artist, to her father’s chagrin, who does visual representations of poems by painting one line atop another), and her narration is alive to the music and light of language, whether she’s parsing an EE Cummings poem for Martina or explaining the etymology of a word like curfew or making sly allusions or silly puns.

And in language there’s the possibility of grace. Recall Sandy’s despondency starting out, reflecting on “the deaths and fragilities of any of the millions and millions and millions of individual people, with their detailed generic joyful elegiac fruitful wasted nourishing undernourished common individual lives, who were suffering or dying right now or had died over the past year and a half in what was after all just the latest plague and whose gone souls swirled invisible in shifting murmurations above every everyday day that we wandered around in, below these figurations, full of what we imagined was purpose.

“What is there to say to that loss?”

Plenty, as it turns out. Because, if in the end Sandy won’t say what happened to the girl or to the bird, or “if any of this ever happened, if either of them ever existed,” Smith writes, “one way or another, here they both are.” And here we are, too, with Sandy, and Smith, “today on the surface of things,” making our way with words.