A show of support

BANCHARAMPUR, BANGLADESH (AFP) – Bangladeshi chemist Abu Kowsir said South Korea gave his family prosperity, so the least he can do is cheer on his benefactors when they begin their World Cup campaign this week.

He and his wife Sabina have amused and confused their neighbours by stitching together South Korean flags into a 3.5-kilometre long banner that weaves a path from their home, along nearby streets and over a river into a neighbouring village.

The extravagant tribute cost them USD5,000 and testifies to Kowsir’s love of a country where he spent much of his adult life as a migrant worker.

“We love South Korea and this is how we chose to support the team,” Sabina, 34, told AFP.

“We will keep supporting them and will pray for their victory.”

Sabina herself has never been to the country where her husband toiled in factories for 15 years, but was intoxicated by the “great tales” he brought home from his time in the industrial giant. “Whenever my husband came home from South Korea, he would tell me about the culture, discipline and beauty of the country,” she said.

“I truly loved those stories. I consider South Korea my dream place to visit.”

In the South Korean factory where he worked, Kowsir was responsible for scraping components out of used handsets and other consumer goods, melting down gold and preparing it for resale. 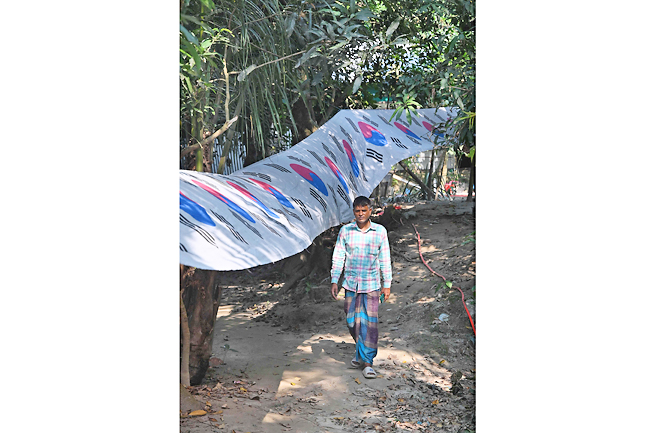 The long stretch abroad gave Kowsir, 45, the resources to start his own jewellery business at home and he credits his labour there for helping propel his family into the country’s middle classes.

He first set his allegiance after watching the 2002 World Cup, jointly hosted by South Korea and Japan, where he was awed by the feats of star midfielder Yoon Jong-hwan. “Jong-hwan was my favourite player, he was brilliant,” Kowsir told AFP at his home. He said it took tailors two weeks to sew the banner, which was partially bankrolled by Kowsir’s decision to sell a mango orchard he inherited from his father.

Its unfurling has caused a local stir on social media, with thousands of people visiting to catch a glimpse of it in person – even if they do not quite understand the reasoning behind the costly endeavour.

“They are crazy, spending so much money just to show their love for their team,” said Mohammad Akash, a neighbour of Kowsir and Sabina.

“People are coming to our village from all over just to see.”

Bangladesh is better known for its love of cricket, with its football team ranked 192nd globally and never qualifying for the premier international tournament.

But every four years, the World Cup arouses feverish passions in the South Asian nation, where football powerhouses Brazil and Argentina have a huge following.

The ostentatious rivalry has occasionally turned violent. During the last Cup in 2018, rival followers of Lionel Messi and Neymar clashed with machetes in the central town of Bandar, leaving two people critically wounded.

South Korea, ranked 28th, faces an uphill battle against Uruguay when its campaign begins tomorrow, and the daunting prospect of a showdown with Portugal later in the group stage.

Kowsir said he has been gently ribbed by neighbours about his side’s dim prospects while drinking at a tea stall, but he remains philosophical. “There’s victory and defeat in every game,” he said. “As a Korean supporter, I hope they will play well. Even if they cannot reach the final, I will still support them.”