A show of cultural identity

French Ambassador to Brunei Darussalam Bernard Regnauld-Fabre was among the attendees.

Antoinette Dans les Cévennes is directed by Caroline Vignal, featuring a romance-adventure film about a teacher who sets out on a stalking vacation on the mountains only to find herself on a trekking tour with a donkey.

The irresistible comedy is said to “evolve from gentle farce to a journey of emotional growth” by The Guardian. 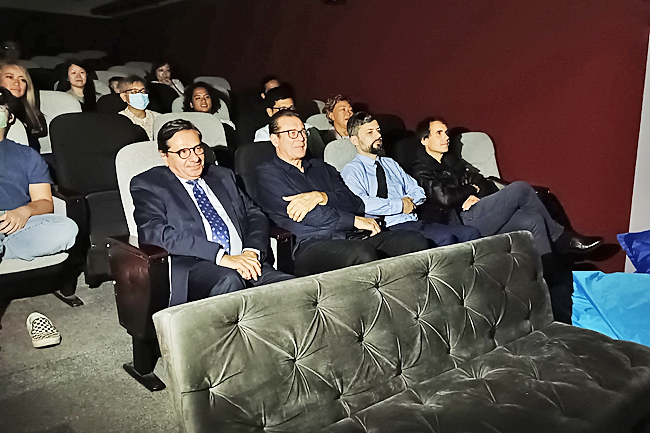 The Rose Maker by Fierre Pinaud, which is described by the New York Times as a relaxed film that allows the audience to sit back and, if not smell the roses, then at least appreciate them.

Meanwhile, Deux Moi, directed by Cédric Klapisch, tells of an enchanting French romantic drama about synchronicity. It explores urban alienation in the “swipe right” culture and losing touch with personal connection, a theme relatable to majority of the younger generation today.

Yesterday’s screening  concluded with Gabriel de Bomin’s De Gaulle, a historical biopic on a French army officer and statesman who led Free France against the Nazi Germany in World War II. A showcase of culture and French culinary from the AFBD was also held.

Films from the Philippines were screened on Monday, featuring a Philippine Oscar entry in 2017, Ma’Rosa. The film was also nominated for the Palm d’Or at the Cannes Film Festival while lead actress Jaclyn Jose won the Best Actress Award at the same festival.

The event also screened Isa Pa With Feelings, a box office hit directed by Prime Cruz to explore the theme of love as a place of solitude despite all its differences.

The event was supported by the Philippine Embassy, Sentro Rizal Filipinas and the Film Development Council of the Philippines (FDCP).

The Brunei Film Blitz provided a rare opportunity for movie-goers to experience national cinema. Unlike globalised commercial cinema, national cinema is indicative of the culture, values and norms of a specific country. More than 20 films have been screened over the past two weeks at Mahakarya Institute of the Arts Asia to showcase films with strong national identity.