A museum without walls

URUMQI (XINHUA) – After packing some naan bread and a dented water bottle, Shan Zhizheng and his wife start up their motorcycle and head off to a cultural relic site, shattering the silence that envelops the valley.

Their starting point is the pastoral and farming landscape of Wenquan county in the Mongolian Autonomous Prefecture of Bortala, northwest China’s Xinjiang Uygur Autonomous Region.

The journey to the relic site and back again is around 150 kilometres.

Known as “a museum without walls”, Wenquan county is home to nearly 260 cultural relic sites under various levels of protection, including tombs, cliff paintings and ruins, which provide materials for researching the history of ancient northern nomads and tribes, according to the county cultural relic protection bureau.

Shan and his wife Yuan Qin are responsible for protecting one particular relic site that spans about eight square kilometres. 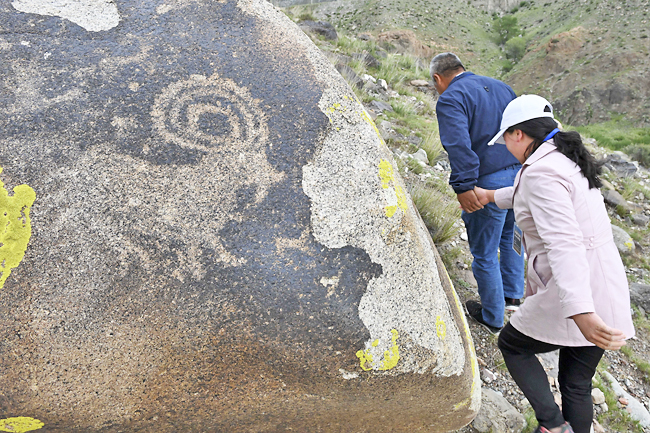 Their relic protection routine usually includes walking around the site to look for footprints and motorcycle tracks, keeping records of the tombs, and updating the local cultural relic authorities in a timely manner.

Forty-nine-year-old Shan, born and raised in Wenquan, has been working as a field conservator for some five years.

However, his bond with cultural relics goes back much further.

In 1999, his family was assigned a piece of wasteland covering 20 hectares, with the aim of reclaiming and working it as farmland for their own sustenance.

Quite by chance, Shan found two saddle-shaped millstones in a field that he was farming.

At that time, although he noticed abrasion marks on the objects, he didn’t know they were cultural relics.

“I thought they were unlike ordinary stones and were very similar to stone tools recorded in history books, so they were probably not used by modern people. So I took them home on a bicycle,” he recalled.

Thereafter, Shan found several stone tools, bits of pottery and other cultural relics on the wasteland and placed them in his home.

In 2008, when staffers from the Wenquan cultural relic protection bureau went to the farming and pastoral areas to conduct a general survey and popularise knowledge of cultural relics among locals, Shan invited them to his home to identify the “relics” he had found.

Experts estimated that the millstones might belong to the Spring and Autumn Period (770 to 476 BCE) and the Warring States Period, and they may provide some insight into the production and living conditions of locals during the period.

The Wenquan county cultural relic protection authorities had long been challenged by the widespread distribution of the relic sites among the county’s vast mountainous terrain, coupled with the lack of conservator staff.

To solve the problem, in 2018, the county assigned 42 field conservators to 26 cultural relic protection units at or above the regional protection level. Shan and Yuan were among them.

“I didn’t go to college, but I have been interested in history and geography since childhood.

Although Shan takes delight in his daily work, there are still many challenges in the role.

Sometimes, the husband-and-wife team has to trek through valleys and rivers as their motorcycle can’t cope with the steeper slopes.

On a winter day in 2018 or 2019, Yuan accidentally stepped on a piece of floating ice while crossing a river and fell into it.

She got back to the shore safely but was soaked to the skin.

However, neither these difficult episodes nor the occasional tedium of the role has undermined Shan’s love for cultural relic preservation.

“Thirteen goats were painted on a large black rock at the top of a slope,” he said, adding that the discovery gave him a sense of accomplishment.

As Shan’s interest in his career increases, so does his expertise.

During his spare time, he reads books on cultural relics to acquire related knowledge.

Additionally, when experts from Xinjiang and Beijing carry out archaeological excavations in Wenquan, he observes their activities on-site and learns from them.

Nowadays, his schedule is growing busier.

Besides regular patrols of the tombs, he also guards rock paintings and stone artifacts, and keeps herders informed about cultural relic protection, including the relevant laws and regulations.

In addition to his own efforts, he also invites those around him to pitch in.

Under his influence, his children have developed a great interest in cultural relics.

His daughter, Shan Xin, who is a journalism major at university, feels that what her father does is meaningful, and her future career could also help popularise the protection of cultural relics.

Over the years, Shan Zhizheng has handed over more than 500 cultural relics to the county- and prefecture-level museums in Bortala, most of which were found in the wasteland or during his field patrols.

In June, the Xinjiang regional culture and tourism department named him “Xinjiang’s most beautiful conservator of cultural relics”.

Only 20 individuals in the autonomous region have received the honour.

“I will continue protecting the cultural relics so that our future generations can still see them,” he said.