THE WASHINGTON POST – The Teenage Mutant Ninja Turtles are brawler kings, and Shredder’s Revenge is a potent reminder of why the foursome have remained icons to anyone lucky enough to stand shoulder to shoulder with friends and strangers in the arcades of the ‘80s and ‘90s.

Developed by Tribute Games, Shredder’s Revenge is a deliberate throwback to just about anything and everything in the 1987 animated series and its various media properties, from surprise cameos of characters from the TV show to pixel-perfect reconstructions of the Playmates toy line as well as the franchise’s various arcade, Nintendo and Sega Genesis video games, especially the 1989 four-player arcade cabinet.

Except this time around, up to six people can play simultaneously.

From the first stage, a swarm of Foot Soldiers will kick you in the face, reminding plastic-and-rubber joystick warriors that these arcade goons existed to munch quarters.

Rookies to the genre might feel overwhelmed by the crush of bad guys, like a bullet hell of bodies. But Shredder’s Revenge also arms the Turtles (along with journalist April O’Neil and their master Splinter) with more moves than they’ve ever had in TMNT titles past.

Players have a standard combination attack, a backward attack, a forward and backward dodge, an upward jump attack, a devastating special move that can be upgraded later, various throws and, of course, the classic dive kick, an iconic move copied in various brawler and fighting games over the decades. 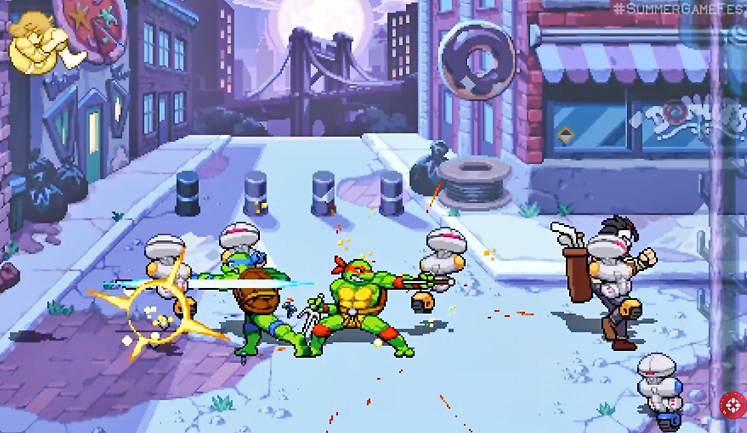 The story mode has light role-playing elements, a slimmer version of the developer’s previous work with the hit modern brawler, Scott Pilgrim vs. The World: The Game.

Playing as each character and achieving certain challenges will win you points to power up through 10 levels, each with small power creeps like another bar of health or special new moves. It gives the game a surprising amount of replayability, as completionists will want to max out every character to level 10 by playing and replaying the 20 levels available, which players navigate through a Super Mario World-like world map.

These replays are made all the more tantalising by finding surprise and maybe long-forgotten side characters from the TV show. I totally forgot about Vernon Fenwick, a snide and career-hungry journalist, but once his face popped into frame, my brain unlocked instant, renewed hatred for him.

Each of these side characters have collectibles hidden throughout the levels, and finding all of them nets you more points to level up each character faster as well as gain more lives.

Both story and arcade mode (a version of the game without the continue feature) take you through a compelling brawler storytelling experience. The original TMNT arcade game was notable for having its story unfold as you played through the level, which in 1989 was the closest thing to an Uncharted-like cinematic experience.

That first game’s level had a driller bore through April O’Neil’s burning apartment as players ran through it, unearthing the first boss, Rocksteady. After his defeat, the Turtles progress through an unbroken string of narrative stages, moving from the apartment to the streets to factories.

Shredder’s Revenge follows this format with wild success, with sharp and luxuriously animated pixels giving so much life to every frame. The first level is a fight through April’s TV news station. Foot Soldiers furiously type away writing articles – and suddenly leap at you. Other goons work out or cook in the test kitchen before attacking.

The next level takes place in the streets, where players sees goons stealing car parts every few scenes, only to reveal they’ve been building the Turtle Tenderizer, an unreleased toy that only appeared in one of the last NES games ever released, Teenage Mutant Ninja Turtles III: The Manhattan Project. Again, Shredder’s Revenge is full of surprises for longtime, knowing TMNT fans.

The third level is a throwback to the vehicle sections of the arcade games, a high-speed highway chase that feels like a shoot-em-up game. Waves of enemies come and go in patterns that require quick adaptation and reactions, backed by a Turtle-based rap that namechecks every character of the series – just one of the brilliant tracks by composer Tee Lopes, who composed the music for the beloved Sonic Mania from 2017.

I’ve already said too much. The rest of the game and its storytelling surprises are best left for players to discover and delight in. Each level throws old references and gags from the franchise with the speed and fury of a good Arrested Development episode, with some of the Turtle moves mimicking TMNT’s Tournament Fighters fighting games and re-enactments of classic battles.

It’s like Tribute Games took a bunch of Turtles toys from the ‘80s and ‘90s, pixelised them and staged fights – just as many of us 30- and 40-year-olds did with our toys as kids.

The enemies and attack patterns will also teach players to utilise the various moves available. Just in the first level, jump-kicking enemies act as a warning to watch the sides of the screen and dodge, while shield-bearing enemies encourage heavy attacks.

A swarm of Foot Soldiers will remind players to liberally use the special moves, and you’ll notice the attack metre fills up fast and often so there’s no point in saving them.

Airborne enemies encourage aerial attacks, while horned enemies will discourage the aforementioned dive kicks and, instead, push players to attack from behind. It’s to Tribute’s credit that Shredder’s Revenge tutorialises these moves through gameplay and adaptive play, rather than hand-holding through the scenarios – just one of the brilliant and subtle strokes of game design that elevates this above the arcade games it honours.

The moves can also be strung together in wild combos with seemingly infinite combinations. By the late game, players will be decimating goons with the fury of a Hong Kong kung fu master, except fuelled by pizza.

The game’s only possible drawback is that its content is rather slim, offering only the arcade and story modes. Casey Jones, the brutish jock of the TV show, is unlocked after beating the game, which encourages yet another run, but it’s considerably less than the recent Streets of Rage 4, also published under the Dotemu banner. That game offered all of the classic Streets of Rage characters after completion.

But the core game is so strong that any fans of brawlers will instantly find this among the best in recent decades, standing alongside Rage 4 and Scott Pilgrim.

Shredder’s Revenge achieves everything it set out to do, and it will go down as an instant classic for its genre. No matter what era, whether it’s 1987, 1989 or 2022, it would be one of the finest, most exciting video game experiences of the year, honing an arcade formula as ageless as Turtles in time.