AP – Brett Morgan’s David Bowie documentary Moonage Daydream plunges into the mind of the rock star – it puts a ray gun to Bowie’s head – and comes away with something that, at its best, is a gift of sound and vision.

It goes without saying that Bowie, like his alter-ego Ziggy Stardust, always seemed to have beamed down from another planet: an elegant extraterrestrial with a spacey schtick that was genuinely convincing. Moonage Daydream does plenty to exalt that Bowie myth, marvelling at this remarkably handsome creature and his sly movements, his on-stage contortions, his otherworldly artistic pursuit. “He’s magic,” said one young fan outside a concert.

But what I most liked about Morgan’s film is how, in sticking as closely to Bowie’s own words, thoughts and psychology, it reveals not an alien, at all, but rather a man – an actual and glorious Earthling – so deeply connected and enraptured with the world and its possibilities that he can’t stop himself from sampling it all, and filtering it through his work.

After Morgan toured us through much of Bowie’s ravenous spiritual journey, it’s illuminating when Bowie – in a dead serious tone not heard anywhere else in the film, as if just saying it out loud irks him – explains his modus operandi not grandly but quotidianly: “I hate to waste days.”

Since seeing Moonage Daydream I’ve been occasionally transported back to its rich collage of imagery and rumination, but I’ve mostly been terrified at what it might have once meant to stand in the way of Bowie and a well-used day. 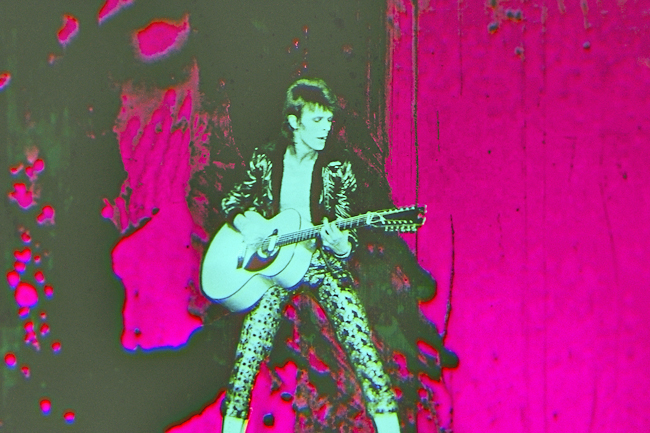 “I’m a collector,” Bowie said at another time in the film, explaining his wide-ranging sources of inspiration. The same may be true for Morgan, the first filmmaker for whom the Bowie estate opened its archives of journals, photographs, recordings and unseen concert footage. This gives Moonage Daydream a bracingly fresh and intimate perspective on a much-documented musician.

Morgan’s approach is about as far away as you can get from a talking-head documentary. With the passionate fury of someone lost in music at 2am, Morgan throws that archival stuff – plus countless split-second snippets from all kinds of other sources – into a kaleidoscopic collider to craft a visceral, impressionistic portrait of Bowie.

Few voices are heard in the film that aren’t clips of Bowie musing. His narration is used less to lay out the chronology of his life (though Moonage Daydream is chronological) than it is to offer a sustained meditation on his life, his art and the experience of “treating myself as a bit of an experiment”.

It’s an approach that inevitably sacrifices context. I was less enamoured with Morgan’s similarly styled 2015 documentary Cobain: Montage of Heck partly because I felt, in sifting through every doodle and diary entry of Kurt Cobain’s, that the film took too worshipful of a stance. Moonage Daydream, too, suffers for a spell in its lack of any opposition to Bowie’s self-driven narrative. It’s well into the film that cracks begin to emerge – what it means to live, as Bowie said, “like an empty vessel.” “Love can’t get quite in the way,” he said, without remorse, in one especially reflective TV interview.

But there are also other documentaries that can ably fill that role. The perspective Morgan seems to be after is Bowie’s, not anyone else’s, and Moonage Daydream succeeds spectacularly in burrowing into its subject’s imagination. Being inside the bubble of Bowie’s psychology is exactly where the film wants to be. And in this case, it’s not nearly so confining. Bowie, a singer, painter, photographer, actor and world-traveller, has interests so wide-ranging that they open countless other doors. Plus, apart from being about the coolest person who ever lived, Bowie is uncommonly thoughtful in analysing himself.

Sometimes Bowie, who refers to his public persona as “an intoxicating parallel to my perceived reality”, seems to be weighing himself like he would a piece of art.

With an electric eye, Moonage Daydream finds the slipstream of that reality.

I would, though, have done away with the last half hour, when the film takes a more dutiful approach to following Bowie’s later chapters. The proper crescendo of Moonage Daydream comes much earlier, in a fit of zeal for day-to-day existence and an impassioned one-word plea from Bowie: “Live!”