THE WASHINGTON POST – Dan Buettner has a knack for distilling complex ideas into something digestible – and even memorable. For example, in a recent Instagram Reel, the author and researcher behind the Blue Zones books addresses a common question he gets:

Buettner’s project celebrates the behaviours, lifestyles and diets of people who live to be centenarians without disease, and he says, “They’re not taking supplements or hormones or energy drinks. They are, however, taking this.”

I knew where he might be going. Sure enough, he holds up a single black bean and says, “They take about 125 of these every single day.”

Buettner’s Blue Zones work aims to help the rest of us learn simple ways of improving our health, too, even if we’re not picking wild greens in Ikaria, Greece; or getting up and down from the floor dozens of times a day in Okinawa, Japan.

Now, after focussing on recipes from the original five Blue Zones (which also include communities in Italy, California and Costa Rica), Buettner is back with The Blue Zones American Kitchen, a book that spotlights what he calls “an alternate standard American diet”. 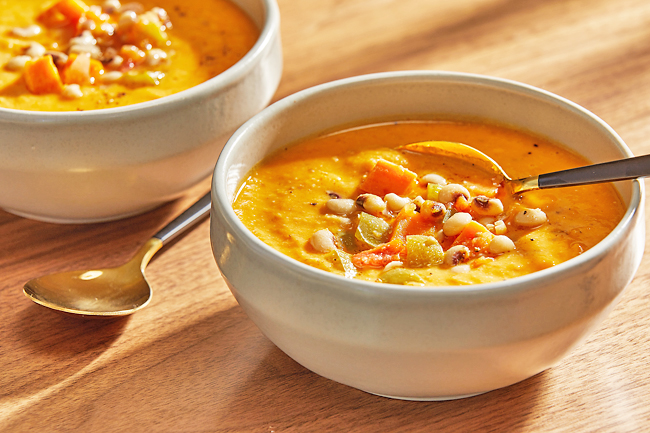 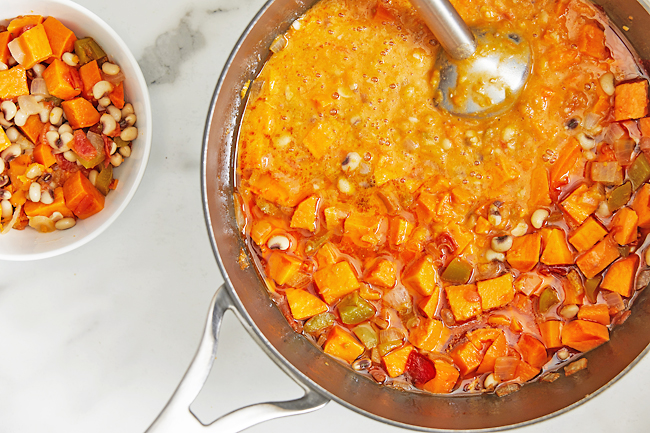 The word “alternate” carries a lot of weight in that previous sentence, because the definition of a standard American diet is something that, as the National Cancer Institute reported in 2010, falls far short of the recommendations for consumption of nutrient-rich vegetables and whole grains, among other problems.

But Buettner suspected that he might be able to find more inspiring examples, especially if he looked at culinary traditions less touched by industrial advancements.

I’ve followed Buettner’s work for more than a decade – frankly, it has influenced my own bean evangelism, among other things – so I knew I’d be on board with the latest iteration of his attempts to make learning to live longer not a chore, but a delicious pursuit.

This sweet potato and black-eyed pea soup, from The Blue Zones American Kitchen, fits right into his message. It’s by Serigne Mbaye, a Senegalese American chef based in New Orleans who designed it as part of a project to reclaim and redefine the “last meal” that his enslaved ancestors were fed by traders who needed to fatten them up for the journey by ship to America.

In Mbaye’s hands, the combination of black-eyed peas and palm oil turns into a beautiful pureed soup that adds sweet potatoes, aromatics and spices.

A touch of cayenne creates a wonderful heat that builds a little at the back of your throat without overpowering any of the other flavours.

The recipe works nicely, but I felt compelled to make one small adjustment: I reserved some of the solids – cooked sweet potato cubes, black-eyed peas and more – before pureeing, and then used them to garnish the soup.

The appeal is textural, of course, but also visual. Because if you’re cooking and serving a dish that spreads the word about how to eat like a centenarian, you don’t want to hide the most nutrient-dense, life-giving ingredients. You want to showcase them.

This soup from New Orleans chef Serigne Mbaye is creamy, nutty, slightly sweet and has a touch of heat from cayenne.

He serves it as a puree, but for a little added visual interest, you can reserve some of the cooked vegetables and beans before blending and use them as a garnish.

Make Ahead: The black-eyed peas need to be soaked for at least three and up to 12 hours in advance.

Storage Notes: Refrigerate for up to one week or freeze for up to three months.

One cup dried black-eyed peas, soaked for at least three and up to 12 hours

Drain and rinse the black-eyed peas.

In a Dutch oven or other large pot over medium-high heat, heat the oil until it shimmers.

Add the tomatoes, onion, bell pepper, garlic, cayenne and salt. Cook, stirring occasionally, until the onion is soft, about 10 minutes. Stir in the vinegar to deglaze the pot, scraping up any browned bits on the bottom of the pan with a spoon.

Stir in the palm or coconut oil, taste, and season with more salt, if needed. Remove from the heat and let cool for a few minutes.

If desired, use a slotted spoon to transfer about two cups of the solids to a bowl and reserve for garnish. Using an immersion blender, puree the soup until smooth.

Divide the soup among bowls, and top each with some of the reserved garnish.