AP – Let’s face it, Pinocchio has always been an odd choice for a children’s morality tale.

Of course, lying is wrong. But that’s not the only message the story sends. Even the classic 1940 Disney version – lighter and more kid-friendly than the 1883 Collodi tale – still sends the message that if you’re not “good”, you don’t deserve to be human.

“A boy who won’t be good might just as well be made of wood,” the beneficent Blue Fairy admonishes Pinocchio in that film. Really? What happened to the idea that “to err is human?” Not to mention second chances or learning curves? And what does “good” mean, anyway? Have they heard of value relativism? But we digress.

Because now comes Guillermo del Toro, with his blazing creative talent, to stir things up. And boy, this is not your Disney Pinocchio – not the1940 classic nor the remake of a few months ago. How will your kid feel about fascist salutes (or are you about explaining them?) A guy named Mussolini? Bombs falling from the sky? A father handing a gun to his son and saying “Shoot the puppet?” (Yes, sweet Pinocchio – THAT puppet).

Of course, del Toro, whose take on Pinocchio is so distinct that the movie is called Guillermo del Toro’s Pinocchio, has just the visual command you’d expect, partnering with co-director Mark Gustafson in this gorgeous stop motion project with a starry voice cast (including three Oscar winners – Christoph Waltz, Cate Blanchett and Tilda Swinton).

The movie often looks stunningly beautiful, in colour and texture. And you’ll want to get on a plane right now and find the Italian village where Geppetto lives, with cobblestoned alleyways framed by snow-capped mountains jutting out in the mist.

Pinocchio, too, is way more interesting-looking than the blue-eyed, bow-tie-wearing puppet we’re used to. He’s a lanky masterpiece in striated pine, with wooden curls, too, and something about him is heartbreakingly lovable.

Maybe it’s because he makes mistake after mistake. And to err is… oh, never mind. 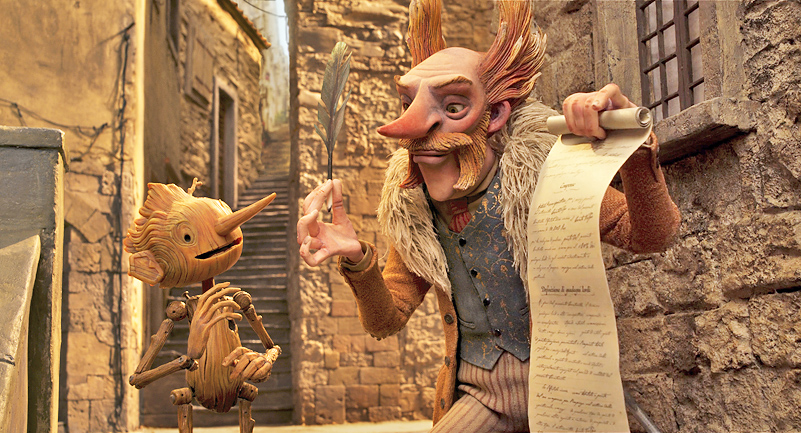 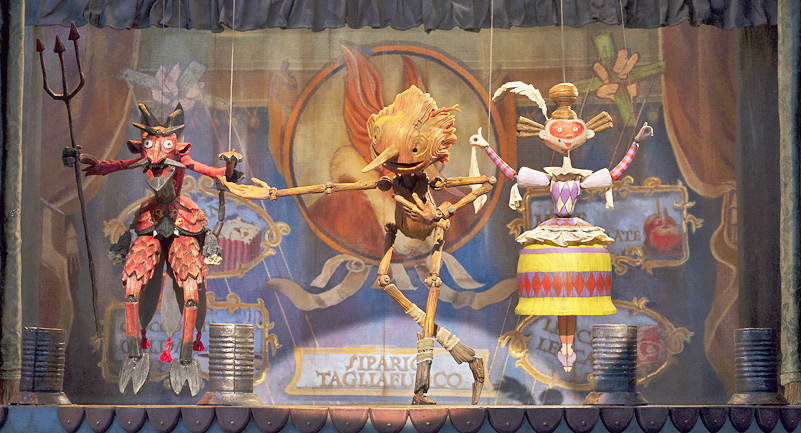 We first meet Geppetto (David Bradley) as the happy father to a real son, Carlo. “All they needed was each other’s company,” said the narrator, namely Sebastian J Cricket, voiced by Ewan McGregor.

They spend their evenings reading stories by the fire, and Carlo accompanies Geppetto to his job restoring a huge statue in a building.

It’s there that tragedy strikes one day; a warplane drops a bomb onto the building, killing Carlo. Geppetto withdraws to mourning.

In grief, Geppetto cuts down a pine tree and makes a puppet. In the night, the Wood Sprite (Swinton, not to be confused with her sister, Death, also Swinton) comes to visit. As in other versions, she asked the cricket to watch over Pinocchio and serve as his conscience.

Geppetto brings the puppet to the public, but he’s greeted with hostility: “Where are his strings? Who controls him”?

At home, Pinocchio wonders why everyone does not love him. A fascist town leader pronounces Pinocchio a “dissident” and “independent thinker”. Not as a compliment.

Pinocchio also gets hit by a truck. Luckily, Swinton’s Death keeps sending him back to life.

If this seems a bit unsavoury for the younger kids, you ain’t seen nothin’ yet – Pinocchio ends up at a fascist military camp, where the boys are set against each other in deadly war games.

Compared to this section, the time he and Geppetto later spend in the belly of a whale seems rather quaint.

Did we mention that this movie is a musical? Freud would probably say there’s a reason we forgot – the songs, some catchier than others, often seem to be dropped soon after they’re started, petering out softly as we move to something else.

The musical element is best used in the theatre scenes where Pinocchio is forced by Volpe to perform. And kids will enjoy the song where Pinocchio boldly (and dangerously) goads the visiting Mussolini with lyrics about poops and farts.

But Guillermo del Toro’s Pinocchio is not aimed solely at kids, but rather is banking on the fact that adults, too, will be drawn to the striking visuals and mature themes at play.

Those themes include parenting. For much of the movie, Geppetto wishes Pinocchio would be just like Carlo, his human son.

Del Toro is also making clear references to the danger of groupthink. Indeed, he seems to have chosen the background of fascism to point out that the narrow-minded townspeople who suspect Pinocchio because he’s different are the real puppets, not Pinocchio.

Guillermo del Toro’s Pinocchio, a Netflix release, has been rated PG by the Motion Picture Association of America “for dark thematic material, violence, peril and some rude humour”.