A feat of functional fitness

In recent times, the rise of fitness competitions has been prevalent in the global sporting arena owing to its popularity and the increasing demand of both recreational and competitive enthusiasts, particularly those who venture in obstacle course racing.

Last November, the Sarawakian city of Kuching with the support of the Malaysian Ministry of Tourism, Creative Industry and Performing Arts hosted the inaugural Deka Fit competition at the Stadium Perpaduan.

The event marked a breakthrough in the Asian market, which has witnessed an increasing surge in participants in the Southeast Asian region in Spartan competitions, which is notably evident with the overwhelming success in Malaysia, Thailand and the Philippines.

It challenges testosterone-inducing individuals to pursue their interests and objectives of achieving and enhancing their fitness levels.

The competition is broken down into 10 separate zones and is preceded with a 500-metre run along the vicinity of the stadium or indoor complex. 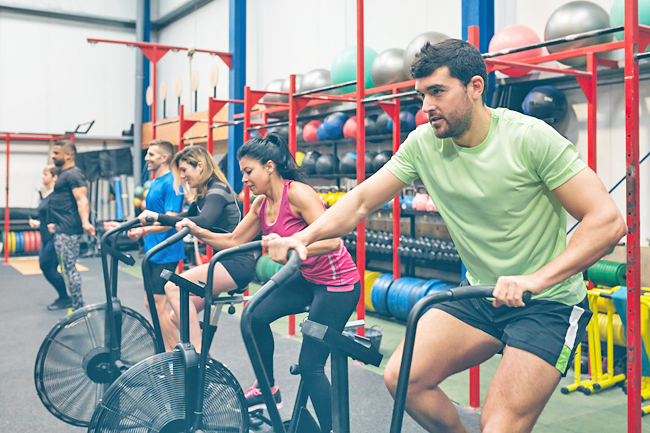 Each workout carries its own level of difficulty and ability and it is normally practiced during a common circuit training class at the gym.

These include the use of cardio-operated machines such as the rowing, ski and the air bike as well as movements focusing on specific areas like medicine ball sit-ups, reverse lunges, dead ball wall-overs, farmer’s carry and box jump stepovers.

The Deka competition was also launched with the intention for people who want to compete without necessarily getting dirty from mud and sand or getting soaked as normally experienced in an outdoor setting.

Similar to the Spartan series, Deka boasts the same characteristics in that it tests an individual’s mental and physical strength and pushes their fitness capabilities to the limit.

There are three variations in Deka namely ‘Fit’; ‘Strong’ – purely on functional training movements only; and ‘Mile’, which requires a participant to complete a distance of one mile as opposed to the 500-metre run.

My interest in joining the Deka Fit in Sarawak stemmed from when my close friends whom I had built a rapport with through our passion for obstacle course racing introduced me to the concept.

The satisfaction of joining the Spartan Stadion in Johor, Malaysia was still fresh in my memories so it was only a natural progression that I registered to partake in a similar competition.

It was a familiar sense of excitement when I entered the venue, seeing all the equipment and the layout for each zone knowing full well that in a short time I would find myself there.

The excitement of being part of something special – as the concept was introduced for the first time in the region – was further heightened as we made our way to the starting line.

As expected, it took time to get myself into the rhythm and the short distance run allowed me to have my heart rate racing and readied me for the first zone which was the ram alternate reverse lunges.

Prior to the start of the competition, concerns surfaced on my ability of getting used to the weights but any doubts proved to be unfounded as I managed to complete it with a decent time.

Then, the cardio machines posed a challenge for whether I had the capacity to control my breathing and producing my maximum VO2 effort.

The numerous classes I attended at the local gyms and fitness studios in Brunei definitely benefited me a lot, as I was able to gain more stamina and endurance with little recovery in between.

I was happy with my times completing the repetitions and distance but if I could re-evaluate how I’ve performed, the volunteers not accepting my repetitions as I did not perform the movement correctly perhaps cost me a podium finish.

For a novice, I shouldn’t be disappointed with my overall performance – I finished fifth in my age group for 35-39 years – but I found out from the official time that I was separated from a spot in the top three by 40 seconds.

Nevertheless, it was a valiant effort and it gave me a renewed confidence that I could raise my fitness levels.

When I found out about the programme, I admittedly most dreaded the tank station, which requires a participant to push and pull a machine designed to test the muscles in the arms, but it turned out to be no different than what I was accustomed to in class.

After completing the final zone, which was the ram burpees, I was overcome with an adrenaline rush at the thought that I needed another 500-metre run to complete the race.

It had never crossed my mind that I would be joining events such as this, so getting the finisher’s medal wrapped around my neck was an incredible feeling.

But my participation would not have been possible without amazing company of those with whom I share common interests and purpose in pursuing the fitness lifestyle. It was perhaps apt that we were also flagged off together, considering that we travelled together.