A diversity of talent

Every year, final year students studying creative arts at Universiti Brunei Darussalam (UBD) put together an exhibition of their work, a culmination of effort and learning over the course of their programme.

This year’s spectacle is billed ‘Spectrum 2022: Infinite’, under the Design and Creative Industries programme, and showcases a diversity of talent as young men and women express their passions in a wide array of mediums.

Md Irfan bin Awang stands next to a vivid painting detailing his impression of Kampong Ayer in the 1800s – a woman traversing among the stilted wooden houses in a perahu – which he said took around 50 hours to complete.

However, the fine traditional artwork isn’t his primary showcase. Instead, it supplemented the 3D-digital models he made, and is showing through a viewing device positioned right next to the painting, which lets visitors explore a recreated virtual environment of his painting, 19th Century Brunei.

“I’ve always been curious about 19th Century Brunei,” he said in an interview with the Bulletin, which made it a natural subject to tackle when he began learning about CGI and 3D modelling in his programme. 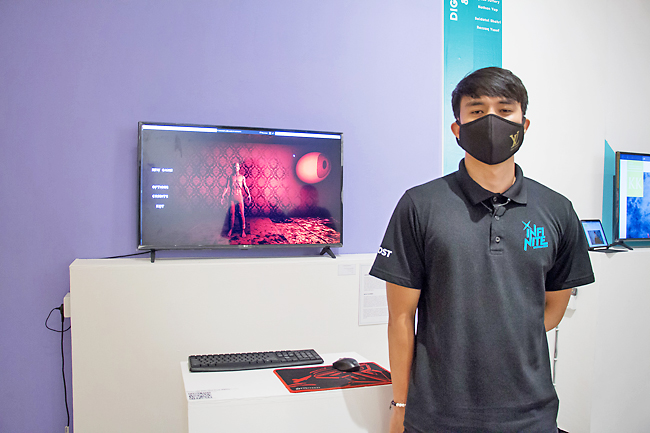 He said creating the models had been very satisfying, and as a personal passion project, plans to use 3D models to create short films centred around the 19th Century.

“I feel like that would be fun” he said.

Inspired by her sister and guided by her mother (and references on the Internet), Q created two dresses that represented the two sides of her heritage – Filipino and Brunei-Malay.

She also wanted to incorporate sustainability into her theme, as waste is a major issue being faced by the fashion industry.

For the Malay dress, Q said that she focussed on ensuring that she used as much of the fabric as possible, as there seems to be a lot of clothing scraps thrown away annually.

“I tried to stop myself from wasting anything, or cutting too much and leaving leftovers,” she said.

The Filipino dress featured piña fibres, which she said was better for the environment because of its biodegradability.

She also wanted to explore the idea of developing other different materials for clothing, such as banana fibres.

Q said once she graduates, she wants to venture further into the fashion industry, advocating for sustainable fashion.

At another part of the exhibition and also exploring the concept of sustainability is Syuhaidah Hamadai and her project Kollekt.

Syuhaidah said she is an advocate for green design and wanted to create something that could raise awareness in the area, thus her cardboard furniture.

“When designed properly, cardboard is quite strong, comparable to ‘traditional’ furniture,” she said.

Syuhaidah had plenty of cardboard to work with. “A lot of people end up just throwing them away when they do not know where to keep them.

“Instead, they could just use whatever available boxes they have at home, create a design, and make furniture out of it. You can sit on it as it is durable and very light,” she said

Her Kollekt is based on a lock-and-key mechanism. The individual cardboard pieces are cut to slide into one another, overall making the furniture more durable. “You also need elevated weight and a large surface area,” she added.

After graduating, Syuhaidah plans to look for employment, but also continue to raise awareness on sustainability and reducing waste.

Elsewhere among the creative minds is Amiruddin Zainul Asri who has made a psychological horror first-person-shooter game, Little Voices in My Head.

He wanted to raise awareness on mental health issues, such as depression and anxiety.

“I chose mental health as the theme because I feel every individual who has experienced or is experiencing depression or anxiety handles it differently.

“For me, I often express it in games, so I deliver it as such,” said the young game developer.

In Little Voices in My Head, players fight enemies reflecting the fears of the character, such as zombies, and collect notes which detail the reasons behind character’s depression.

Amiruddin said he is still learning, having picked up programming last year, and had developed Little Voices over four months using Unity and C#.

He hopes to also release the game on Steam.

He looks to hone his game developing skills and join the industry to create more games.

“I’m grateful for the support I’ve received from my friends, who have been with me all this while to help me progress and change my life,” he said, adding that he looks forward to speaking with more people during the month-long showcase.

The ‘Spectrum 2022: Infinite’ exhibition is open to the public until June 23 from 9am to noon and 2pm to 4pm at Chancellor Hall, UBD.