A cup of necessity

DUBAI, UNITED ARAB EMIRATES (AP) – From Mustafa Moeen’s spot behind the counter, he sees the many faces of Dubai. They come – tired, hungry, stressed out – for a respite and a cup of karak.

Labourers stop on the way to work. Cab drivers linger after long shifts. Emiratis cruise by on midnight joyrides. A cup of milky sweet tea to ease the burden of the day, customers said, long priced at just AED1, a bit less than USD0.30.

But now, as supply chain shortages and Russia’s war on Ukraine lead to price spikes on everything from breakfast sandwiches in Manhattan to chicken tinga in Mexico, Dubai tea sellers are bumping up prices of what’s informally considered the national drink of the United Arab Emirates (UAE). Moeen said he had no choice but to raise the price to AED1.50, or just over USD0.40.

“Everything got more expensive for us – milk, sugar, tea bags. Even the price of cups doubled,” Moeen said from the one-room storefront in Satwa, a neighbourhood bustling with South Asian workers on rickety bicycles that can feel a world away from Dubai’s flashy skyscrapers. “We also have to survive.”

For nearly two decades, karak – an elixir of sugar, dehydrated milk and cardamom-infused tea – has largely been the same price, just one nickel-plated steel dirham coin. A dirham is worth 100 fils.

“It’s not about the 50 fils. They are making small, small changes,” said Zeeshan Razak, an accountant from Kerala, India, sipping tea with his colleague. “We are concerned about what it means.”

It was one of the rare treats that AED1 could buy in Dubai, which draws both the world’s richest people and legions of low-paid migrant workers. “It’s part of its brand that it costs AED1,” said Abdulla Moaswes, a Palestinian karak aficionado raised in the UAE who’s known for his scholarship on the tea. “People stockpile the coins so they always have one on hand.” 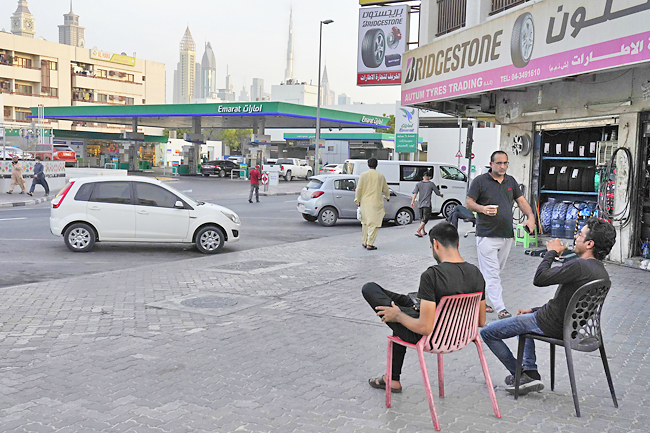 But rising inflation has taken a toll. The price of another sweet staple in Dubai long worth AED1, the McDonald’s soft-serve ice cream cone, recently spiked to AED2. McDonald’s UAE franchisee said it made the “difficult decision” due to a spike in “operating, equipment, manpower and the raw material costs”.

Residents are feeling the pinch.

“In the five years I’ve been here this is the worst time. Rent, food, petrol – I can’t catch up,” said Arslan, an app-hired chauffeur from Pakistan’s Punjab province who drinks four cups of caffeinated karak daily to fuel his 12-hour night shift. “There’s no way to cut back.”

He gave only his first name for fear of reprisals, saying his landlord is threatening to call the police because he can’t make rent.

Annual inflation in Dubai accelerated to a record 7.1 per cent last month, with consumer prices growing fastest in food, transportation and entertainment, according to the emirate’s statistics authority. Gas prices shot up nearly 80 per cent from January to July – a shock for a wealthy petrostate that has long considered cheap fuel a birthright. To protect its citizens from cost pressures, the UAE announced it would nearly double the welfare budget for low-income Emiratis.

But many of the country’s poorest people aren’t citizens eligible for stipends, but migrant labourers from India, Pakistan and elsewhere toiling long hours for slim salaries.

“Inflation is an issue in the country, and it’s hitting segments of the expatriate population already operating on a shoestring budget,” said Robert Mogielnicki, a senior scholar at the Arab Gulf States Institute in Washington. “Small changes in prices… can have a big impact.”

Many are reminded of the impact each day – when they go for karak. At night, the empty lots and street corners of old Dubai fill with workers gossiping and scrolling through their phones over steaming cups.

“I’ll pay AED1.50, fine, but it all adds up,” said Anayeg Ula, a 29-year-old food delivery rider from Bangladesh, taking a karak break beside his bike. “I came here to make money, not spend it.”

Though modest in size, a cup of karak contains volumes in terms of the UAE’s history.

The oil boom of the 1970s brought millions of migrants to the Gulf Arab states, along with their tea preferences. Indians and Pakistanis building up the coastal emirates craved masala chai, but lacked the money to buy fresh milk and the time to slow-cook tea over a coal fire.

They needed quick chai at the cheap that could be stored and served in vast quantities at construction sites.

“Karak was born from necessity,” said Moaswes, the karak scholar. “It’s what the economic situation allowed for decades ago.”

The tea exploded in popularity over the years, becoming a social ritual – as well as an indispensable routine. The trend spread to Emiratis, who traditionally brew their Arabic tea ink-black but now claim the milky chai as part of their heritage. Dubai’s tourism authority promotes top karak spots to visitors. “It’s nostalgic for me. That was breakfast on a daily basis, roaming around in our cars,” recalled Ahmed Kazim, an Emirati who helped found a popular upscale karak shop, Project Chaiwala. “It’s the UAE culture. You’ll see a guy with a bicycle pull up next to a Lamborghini.”

The price of karak was 50 fils for a quarter-century, rising to AED1 in 2004 as Dubai rushed to build its booming desert skyline.

Some fear that if prices continue to climb, the staple may be lost to the working class who created it.

Shashank Upadhyay, a bakery owner in Dubai’s old Karama neighbourhood, tried to sell karak for AED2 earlier this year. But he swiftly backpedalled after seeing his customers “disturbed”.

“In this area, chai is too important,” Upadhyay said. “If we keep raising it, it will become something for people who go to high-end restaurants. But it’s for local working people, like us.”