AP – For a young imagination, there is something uniquely captivating about a stowaway story on the high seas. The stakes are great, but the adventure is so far removed from any reality most kids know that it becomes a purely transportive experience. It is a fantasy you can get wrapped up in and put away when it’s over.

Disney veteran Chris Williams (Big Hero 6) said it was the rollicking adventures he grew up watching, King Kong, Raiders of the Lost Ark, Treasure Island and Lawrence of Arabia among them, that made him want to make movies. And with The Sea Beast, an animated fantasy adventure which debuted on Netflix yesterday, Williams, who directed and co-wrote, has made something quite winning for all ages.

In this world, which seems to be set in some gilded, imaginary kingdom in the late 17th Century, giant, colourful sea monsters roam the Dregmorr Sea and are great threats to towns and ships. Monster hunting has become a full-time job for brave seafarers, many of whom are essentially celebrities whose adventures and daring are written about in books cherished by children.

One of those children is Maisie Brumble (Zaris-Angel Hator), a spirited orphan who dreams of fighting sea beasts herself like her hero Jacob Holland (Karl Urban). So she decides to stowaway on his ship, the Inevitable, led by Captain Crow (Jared Harris), to help in their pursuit of the biggest conquest yet, the Red Bluster.

The Sea Beast is notable for its refusal to dumb itself down for a young audience. It’s anchored by interesting and fairly complex characters who actually have arcs to play. Harris’s Captain Crow is an unambiguous Ahab type, but he also has a sweet, surrogate paternal relationship with Urban’s Jacob, whom he rescued from a shipwreck at a young age. At times, The Sea Beast, with a lively score by Mark Mancina, more closely resembles something like Pirates of the Caribbean than your typical animated fare.

The action scenes are really quite exciting, too, and after an epic battle with the Red Bluster, Jacob and Maisie find themselves stranded on an island together and fighting for survival. For anyone who felt let down by the little Leia and Obi-Wan relationship in the recent Kenobi series, The Sea Beast features a much more compelling version of that relationship. Much of that has to do with Maisie’s believably precious dialogue. Plus, there’s a nice message at the end (though to reveal what that is would definitely be considered a spoiler). It straddles the delicate line of being both classic and modern.

The monsters themselves, though the size of Godzilla and packing Godzilla’s destructive power, are exaggeratedly cartoonish (comparisons to How to Train Your Dragon are inevitable). This might seem like a silly thing to say considering it is a cartoon, but it’s an interesting choice when everything else is so painstakingly rendered with realistic, tactile details. It’s not a criticism, exactly. But it does ensure that the monsters won’t immediately be the stuff of nightmares for the youngest viewers, which seems to be a fair trade off. 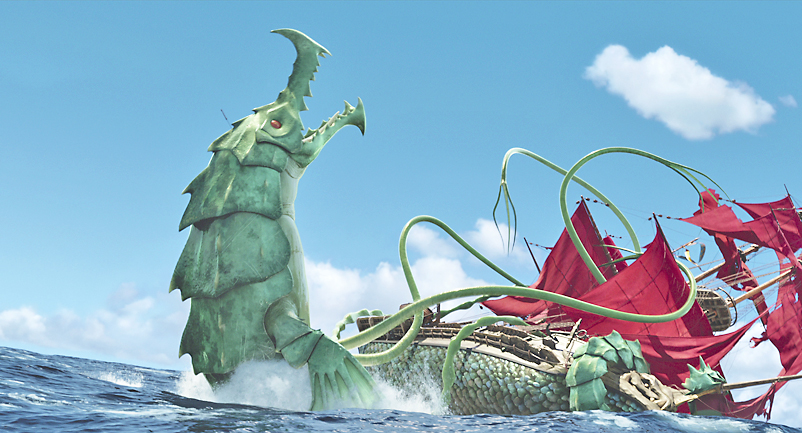