DOHA, QATAR (AP) – The World Cup in Qatar has become a political lightning rod, so it comes as no surprise that soccer fans’ sartorial style has sparked controversy.

Forget your classic soccer jerseys – the streets of Doha have been transformed into a chaotic runway show in terms of fashion.

Visitors from around the world are wearing revamped versions of traditional Gulf Arab headdresses and thobes.

Fan fashion has drawn everything from amusement to outrage from locals in the tiny Muslim emirate that has seen nothing remotely like the spectacle of the World Cup before.

The most popular style among foreign fans at this World Cup is the ghutra, the traditional head scarf worn by men across the Arabian Peninsula. 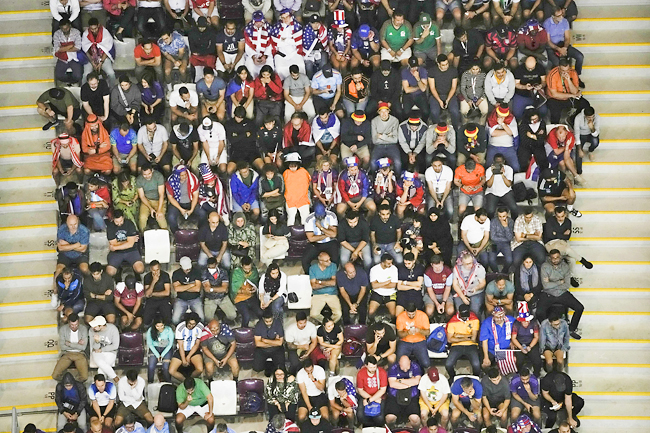 If photographed at a Halloween party back home in Cape Town, South Africa, 60-year-old Gavin Coetzee admits his wardrobe choice might seem ill-conceived – even cringe-worthy. He asked a tailor to stitch together four African flags into a ghutra and stereotypical Arabian thobe, the long flowing tunic that Qatari men wear in crisp white.

“I wouldn’t wear this in a Western country,” he said, referring to heightened cultural sensitivity there. But to his surprise, his costume has drawn elation and praise from locals in Qatar.

“It’s been amazing. Everyone wants to take our photo, ask us where we’re from, they’re interested in why we put this outfit together,” he said, alongside two friends wearing the same get-up.

The narrow alleys of Doha’s central Souq Waqif teem with vendors hawking ghutras in various national colours, from Brazil’s bright blue, green and yellow to Mexico’s tricolour red, white and green. The sellers iron and fold them to create a widow’s peak effect, carefully fitting the cloth to fans’ heads in the so-called cobra style of worn by Qataris.

“I wanted to immerse in the culture. It’s fun to get to try new things,” said 41-year-old Ricardo Palacios from Venezuela, wearing a red-and-white chequered headdress. “Locals are in shock … that someone wearing a Spanish shirt is wearing this.”

Qataris’ only complaint so far, Palacios added, is that “I don’t know how to do it right.” He said locals stop him in the street, restyling his headgear so it looks the way it should. Similar videos have been widely shared on social media.

Qatari citizen Naji al-Naimi, a board member of Majlis al-Dama, a lively hub of coffee and backgammon in Doha’s outdoor marketplace, said the scores of international fans wearing his national dress don’t bother him in the least.

Instead, he finds the trend endearing. He compared it to citizens of the Arabian Peninsula wearing jeans or suits when travelling in Europe.

“We’re always trying to adjust and appeal to the customs and traditions of the host country,” he said.

Among foreign women, even the hijab, the traditional Muslim headscarf showing piety to Allah the Almighty, has emerged as trendy World Cup wear.

Online videos show foreign women on the streets of Doha donning colourful headscarves, exclaiming how secure and cute they feel.

Footage circulating on Twitter showed Qatari security turning away fans dressed as crusaders before the England-Iran match in the tournament’s group stage. Others reported they were asked to surrender their costumes before England played the United States a few days later.

“What is so painful is to see some visitors in our country praising the glories of Crusader Europe, which disgraced the honour of all Muslims,” said a 33-year-old Qatari citizen Ashraf al-Khadeer in Doha.

More broadly, the question of what to wear at the World Cup in Qatar, a conservative Muslim emirate, has sparked anxiety for female fans long before the tournament kicked off.