The acting district officer in a speech expressed gratitude to His Majesty and said the presentation of land grants and house keys was a blessing that shows the monarch’s care and concern to the people’s wellbeing thus cultivating solidarity among the populace.

After the presentation ceremony, His Majesty toured the sixth form centre where the monarch was welcomed by Minister of Education Datin Seri Paduka Dr Hajah Romaizah binti Haji Mohd Salleh. After the visit, the monarch made a stop at Sayyidina Othman Secondary School before visiting house key recipients Haryani binti Haji Yahaya and Mohamad Khairi bin Haji Mahadi at their residences in Jalan Paya Namurai of RPN Kampong Bukit Beruang. 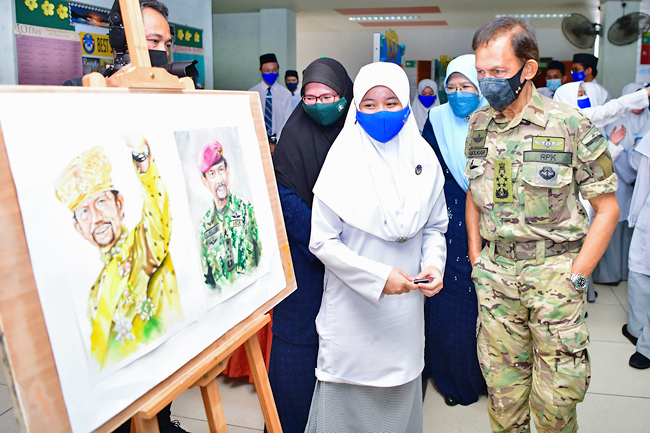 Each terrace house has a 85.9-square-metre floor area and comes equipped with three bedrooms, a living room, a bathroom and a kitchen. RPN Kampong Bukit Beruang has 530 units of detached; 500 units of semi-detached; 368 units of cluster-type and 1,348 units of terrace houses.

From the figure, 29,005 houses have been awarded to recipients including 2,746 applicants for RPN in Tutong District.

His Majesty also paid a visit to Kampong Penabai Village Head Mohammad Sofiyuddin bin Mohammad Serudin in Kampong Kuala Tutong and concluded yesterday’s series of visits in the district with a stopover at Tutong Senior Citizens Activity Centre where the monarch was greeted by Minister of Culture, Youth and Sports Awang Haji Nazmi bin Haji Mohamad.