His Majesty was greeted upon arrival by Minister of Education Datin Seri Setia Dr Hajah Romaizah binti Haji Mohd Salleh, as Chairperson of UNISSA’s Council, and Rector of UNISSA Dr Haji Norarfan bin Haji Zainal. The event began with the procession of the Chancellor into the ICC Hall led by the mace-bearer holding aloft the UNISSA Mushaf Al-Quran, followed by the recitation of Selawat and Qasidah (Dikir) ‘Ahlan Bikum Sultanana’, as well as the singing of the national anthem.

This was followed by a welcoming address from the UNISSA Rector who highlighted the university’s achievements, including the graduation of the first batch of Bachelor of Halal Science programme.

He believes the Halal Science graduates will be able to make contributions towards empowering and strengthening the halal industry in the Sultanate. “This development is relevant as the current global halal industry continues to grow from year to year,” he said. 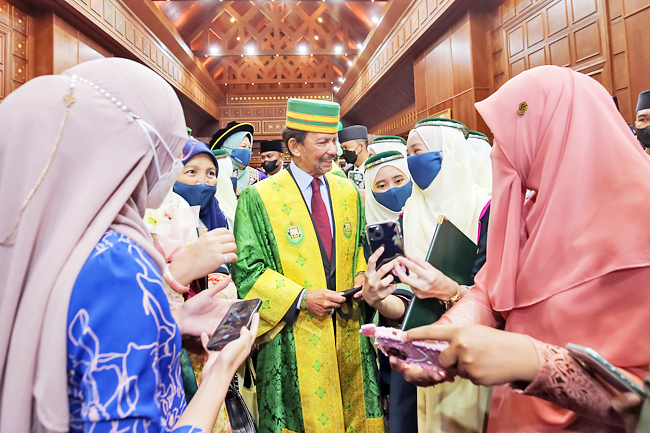 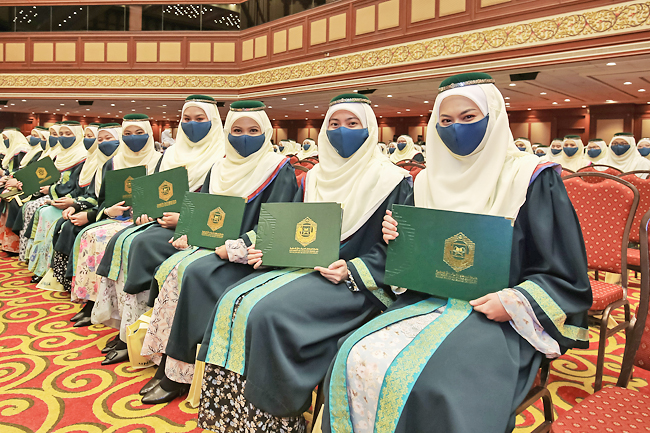 The UNISSA Rector also announced the first batch of National Diploma in Dai’e and Leadership graduates. The academic programme, under the Faculty of Usuluddin, is coordinated by the Centre for Leadership and Lifelong Learning serving as a platform to educate and sharpen the skills of Da’ie and their leadership.

On academic development at UNISSA, a number of new programmes have been introduced, in line with the country’s higher education landscape and current industrial needs, Dr Haji Norarfan said.

He announced the recipients for UNISSA’s Medal and Book Prizes Awards as well as contributors for the 12th Hafl Al-Takharruj.

The ceremony continued with the presentation of certificates by His Majesty to UNISSA graduates, including 22 international students, from Thailand, Indonesia, Maldives, Singapore, Malaysia, Egypt, Gambia and Uganda.

This year, some 74 students graduated in Bachelor of Halal Science and 13 for National Diploma in Da’ie and Leadership. One of UNISSA’s missions is to produce pious and excellent leaders who can contribute to the development of the Ummah through academic excellence, research and community services.