Some 350 vehicles were inspected during a roadblock at the junction of Kampong Lamunin, Tutong District with 37 violations detected.

The joint operation was conducted by personnel of the Lamunin Police Station, the Royal Customs and Excise Department, the Narcotics Control Bureau (NCB) and the Land Department on Monday night. Five docket and 15 compound offences were detected, such as driving an uninsured vehicle and driving with expired vehicle and driving licences, as well as five offences involving contraband.

Two suspects were detained by the NCB after the discovery of items believed to be drug paraphernalia. 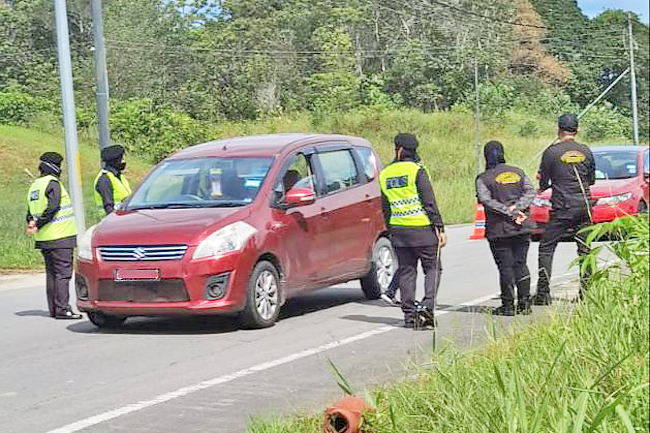 The case was transferred to the Royal Customs and Excise Department (RCED) for investigation.

A roadblock by personnel from Bangar Police Station and RCED, led by Acting Assistant Commanding officer of Temburong Police District Acting DSP Shamsulariffin bin Haji Abdul Wahab, uncovered four compound offences under Chapter 68 of the Road Traffic Act – one possession of a vape offence under the Excise Order 2006, and one possession of drug, believed to be marijuana offence under Chapter 27 of the Misuse of Drugs Act.

The operation aimed to raise awareness on the importance of abiding by the laws, as well as for the public to build trust in enforcement agencies to carry out their duties in keeping the country peaceful, safe and harmonious.

The public is also urged to play an active role as the eyes and ears for enforcement agencies by channelling information to curtail criminal activities.