AP – In an unfinished part of his basement, 95-year-old Richard Soller zips around a makeshift track encircling boxes full of medals he’s won for track and field and long-distance running.

Without a hint of breathlessness, he said, “I can put in miles down here.”

Steps away is an expensive leather recliner he bought when he retired from Procter & Gamble with visions of relaxing into old age. He proudly proclaims he’s never used it; he’s been too busy training for competitions, such as the National Senior Games.

Soller, who lives near Cincinnati, has achieved an enviable goal chased by humans since ancient times: Staying healthy and active in late life. It’s a goal that eludes so many that growing old is often associated with getting frail and sick. But scientists are trying to change that – and tackle one of humanity’s biggest challenges – through a little known but flourishing field of aging research called cellular senescence.

It’s built upon the idea that cells eventually stop dividing and enter a “senescent” state in response to various forms of damage. The body removes most of them. But others linger like zombies. They aren’t dead. But as the Mayo Clinic’s Nathan LeBrasseur puts it, they can harm nearby cells like mouldy fruit corrupting a fruit bowl. They accumulate in older bodies, which mounting evidence links to an array of age-related conditions such as dementia, cardiovascular disease and osteoporosis.

But scientists wonder: Can the zombie cell build-up be stopped? 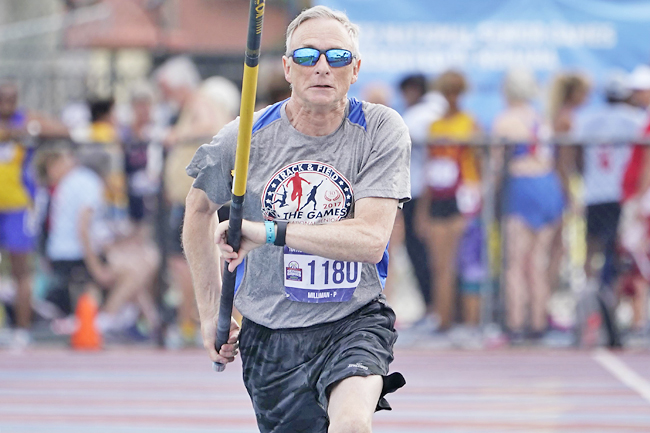 “The ability to understand ageing – and the potential to intervene in the fundamental biology of ageing – is truly the greatest opportunity we have had, maybe in history, to transform human health,” LeBrasseur said. Extending the span of healthy years impacts “quality of life, public health, socioeconomics, the whole shebang”.

With the number of people 65 or older expected to double globally by 2050, cellular senescence is “a very hot topic”, said Viviana Perez Montes of the National Institutes of Health. According to an Associated Press analysis of an NIH research database, there have been around 11,500 total projects involving cellular senescence since 1985, far more in recent years.

About 100 companies, plus academic teams, are exploring drugs to target senescent cells.

And research offers tantalising clues that people may be able to help tame senescence themselves using the strategy favoured by Soller: exercise.

Although no one thinks senescence holds the key to super long life, Tufts University researcher Christopher Wiley hopes for a day when fewer people suffer fates like his late grandfather, who had Alzheimer’s and stared back at him as if he were a stranger.

MORTAL CELLS
Leonard Hayflick, the scientist who discovered cellular senescence in 1960, is himself vital at 94. He’s a professor of anatomy at the University of California, San Francisco, and continues to write, present and speak on the topic.

At his seaside home in Sonoma County, he leafs through a binder filled with his research, including two early papers that have been cited an astonishing number of times by other researchers. Before him on the living room table are numerous copies of his seminal book, How and Why We Age, in various languages.

This scientific renown didn’t come easily. He discovered cellular senescence by accident, cultivating human foetal cells for a project on cancer biology and noticing they stopped dividing after about 50 population doublings. This wasn’t a big surprise; cell cultures often failed because of things like contamination. What was surprising was that others also stopped dividing at the same point. The phenomenon was later called “the Hayflick limit”.

The finding, Hayflick said, challenged “60-year-old dogma” that normal human cells could replicate forever. A paper he authored with colleague Paul Moorhead was rejected by a prominent scientific journal, and Hayflick faced a decade of ridicule after it was published in Experimental Cell Research in 1961.

“It followed the usual pattern of major discoveries in science, where the discoverer is first ridiculed and then somebody says, ‘Well, maybe it works’… then it becomes accepted to some extent, then becomes more widely accepted.”

At this point, he said, “the field that I discovered has skyrocketed to an extent that’s beyond my ability to keep up with it”.

ZOMBIE BUILD-UP
Scientists are careful to note that cell senescence can be useful. It likely evolved at least in part to suppress the development of cancer by limiting the capacity of cells to keep dividing. It happens throughout our lives, triggered by things like DNA damage and the shortening of telomeres, structures that cap and protect the ends of chromosomes.

Problems can arise when they build up.

Senescent cells resist apoptosis, or programmed cell death, and characteristically get big and flat, with enlarged nuclei. They release a blend of molecules, some of which can trigger inflammation and harm other cells – and paradoxically can also stimulate the growth of malignant cells and fuel cancer, LeBrasseur said.

Scientists link some disorders to build-ups of senescent cells in certain spots. For example, research suggests certain senescent cells that accumulate in lungs exposed to cigarette smoke may contribute substantially to airway inflammation in COPD.

The idea that one process could be at the root of numerous diseases is powerful to many scientists.

It inspired Dr James Kirkland to move on from geriatric medicine.

“I got tired of prescribing better wheelchairs and incontinence devices,” said Kirkland, a professor of medicine at Mayo considered a pioneer of the senescence renaissance. “I wanted to do something more fundamental that could alleviate the suffering that I saw.”

DRUG TARGETS
That quest leads him and others to develop medicines.

Experimental drugs designed to selectively clear senescent cells have been dubbed “senolytics”, and Mayo holds patents on some. In mice, they’ve been shown to be effective at delaying, preventing or easing several age-related disorders.

Possible benefits for people are just emerging. Kirkland, LeBrasseur and colleagues did a pilot study providing initial evidence that patients with a serious lung disease might be helped by pairing a chemotherapy drug with a plant pigment. Another pilot study found the same combination reduced the burden of senescent cells in the fat tissue of people with diabetic kidney disease.

At least a dozen clinical trials with senolytics are now testing things like whether they can help control Alzheimer’s progression, improve joint health in osteoarthritis and improve skeletal health.

Some teams are trying to develop “senomorphics” that can suppress detrimental effects of molecules emitted by senescent cells. And a Japanese team has tested a vaccine on mice specific to a protein found in senescent cells, allowing for their targeted elimination.

“I tell my lab that if we find a drug that clears the bad senescent cells and not the good ones and we cure Parkinson’s disease and Alzheimer’s and osteoporosis and macular degeneration, it would be wonderful,” said biogerontology expert at the Buck Institute for Research on Aging Judith Campisi. “But if we cure wrinkles, we’ll be rich, and I’ll never have to write another grant.”

Amid the buzz, some companies market dietary supplements as senolytics. But researchers warn they haven’t been shown to work or proven safe.

And there’s still much to learn about clinical trial drugs.

“We know that senolytics work pretty well in mice,” Wiley said. “We’re still really figuring out the basics with people.”