BOGOTA (AFP) – By day they are publicists, YouTubers or market vendors. By night they dodge tear gas and stun grenades to tend to the wounded in clashes between the police and young people spearheading an unprecedented social upheaval in Colombia.

Some have medical training, others are learning on the job.

“I have basic knowledge of first aid… and I feel the need to apply it in a situation like the one we are living through in Colombia,” said a 32-year-old publicist helping out at a makeshift clinic on a basketball court south of Bogota.

“A friend of mine was sexually assaulted by the police here,” said another rescuer, 23, who joins the brigade at night after finishing work at a market square.

“We are doing what the police should be doing: saving lives,” added another.

Manned solely by volunteers – about a dozen people aged 18 to 34 – and lit from the homes of neighbours nearby, the clinic was erected near a blockade at the Portal de las Americas terminal station. 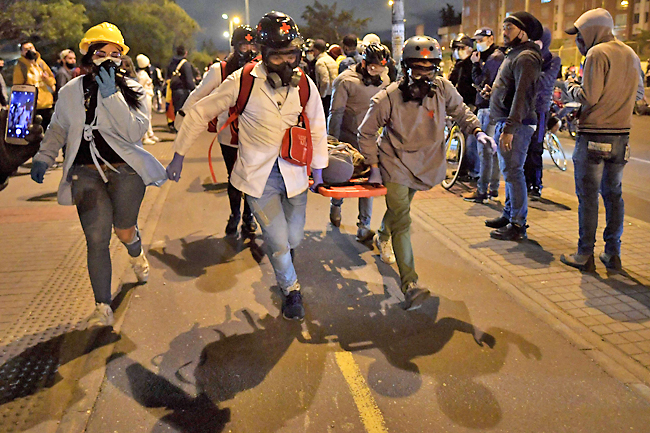 For weeks, protesters have been blocking the transport hub to protest what they said was the irregular detention of a dozen among them.

The station has become known as ‘Resistance Portal’, a symbol of the five-week-old mobilisation against the government of President Ivan Duque as poverty, joblessness, inequality and the fallout from the coronavirus epidemic have sparked widespread anger and resentment.

In five weeks of unrest, 59 people have died across Colombia according to official data, with more than 2,300 civilians and uniformed personnel injured.

All but two of the dead are civilians, and the armed forces clampdown on the protest movement has drawn international condemnation.

“We used the stretcher as a shield,” said a 24-year-old nurse, also volunteering to care for the fallen at the Portal de las Americas barricade, recounting one of many hair-raising experiences.

“I saw on the news the daily number of wounded and I felt useless at home… One day I decided to take my medical kit and go help,” said another nurse, 34.

The caregivers, professionals and amateurs alike, are loath to give their names, fearing for their safety.

On May 24, Armando Alvarez, a doctor who treated wounded protesters in the city of Cali, was shot dead as he left his workplace.

On the evening of May 26, at the ‘Resistance Portal’ barricade, rescuers flitted to and from the frontline where protesters armed with rocks and shields made of wood and tin confronted heavily-armed riot police.

One by one they fell, choking on tear gas or hurt by projectiles fired by the police.

The most serious injuries were to the face and eyes.

Around 9.30pm a man was carried the 200 metres from the front line to the makeshift clinic by his friends. He is the first patient for the night, his ankle in pain after it was hit by a gas canister he said was fired from a nearby building.

Another followed shortly after with a shoulder injury caused by an unidentified projectile fired by police.

Some days are more difficult than others, the 34-year-old nurse told AFP.

“There are things that shock you, like when a young person asks you: ‘Tell me the truth. Did I lose my eye?’”

Even though their own lives have been disrupted by the clashes and barricades, neighbours have continued to support the rescuers with medical equipment and food.