Your ability to focus may be limited: Here’s how to work around that

THE WASHINGTON POST – My mind gets a little fuzzy when I concentrate for too long. So, to protect my focussed time, I rearranged my life, trading a steady salary as a multimedia journalist covering the tech world for flexibility as a freelance writer focussing on health and wellness. Working less, not more, holds the key to my productivity.

I do the bulk of my work in four or five 55-minute chunks throughout the day, taking half-hour breaks when my mind starts to wander. This schedule puts me in good company. Although there’s not much hard science behind it, a lot of productivity gurus push the idea that we get our best work done with about four or five hours of focus a day.

They came up with this range partly because of a well-known study of music training, led by psychologist K Anders Ericsson, that inspired the ‘10,000-hour rule’. (The concept, popularised by writer Malcolm Gladwell, is that it takes at least 10,000 hours of deliberate practice to become an expert at something, although Ericsson has said this is an oversimplification.) What’s the connection to four or five hours of focus? That’s how long the “best” students in Ericsson’s research tended to practice.

Such a schedule is not uncommon among the accomplished, according to Silicon Valley writer and consultant Alex Soojung-Kim Pang, who specialises in productivity. Alice Munro, Charles Darwin and Gabriel García Márquez are among the creative people with similar habits, a topic Pang dedicated a chapter to in his 2016 book, Rest: Why You Get More Done When You Work Less.

“Rather than working super long hours, they maximised the amount of depth of focus time they had per day,” he said, “and really protected that and organised their day so they could put in about four or four-and-a-half hours of really intensive deep work.”

While there isn’t extensive research into working and focus, the four-to-five-hour sweet spot sounds about right to developmental neuroscientist and assistant professor in the Department of Psychology at the University of California at Riverside Kalina Michalska. She stops short of applying this number to everyone, however. Humans have individual differences “in attentional networks and circadian rhythms,” she said.

There are also differences in how we manage our emotions, something most workers have had to deal with during the coronavirus pandemic. “We’ve all been under a lot of stress and anxiety for the past year,” said behavioural neurologist and assistant professor of neurology at Northwestern University’s Feinberg School of Medicine in Chicago Borna Bonakdarpour. “That, by itself, affects our focus.” 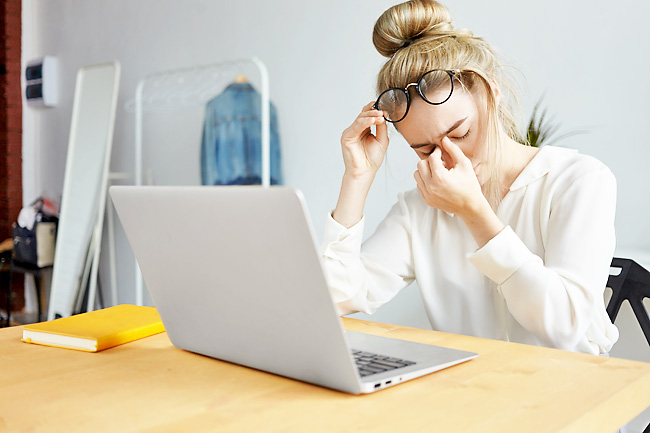 Pandemic aside, Bonakdarpour said the main culprits behind our limited ability to focus are cognitive over-load and energy use. “When you increase the metabolism of the brain, it comes with byproducts that need to be cleared out and cleaned,” he said. “The brain needs to rest.” According to Bonakdarpour, research shows that for every two hours of focussed work, “you need about 20 to 30 minutes to break.”

Of course, some of the work we do doesn’t require 100 per cent of our attention, Bonakdarpour added. “That’s why you can kind of get through even when you’re tired,” he said. “But as a general principle, your brain is functioning at a lower level.” Studies show that as our focus slides, we’re less motivated, we make more mistakes and we get distracted more easily.

This truth is recognised in some professions where attention failure can be life-threatening. Air traffic controllers, for example, only manage live traffic for an average of about four hours out of their eight-hour shifts, according to the Federal Aviation Administration (FAA).

But most of us are not air traffic controllers with bosses who understand the limits of focus. If we only have four or five hours of peak attention within a normal workday, how can we optimise them? Here are some tips from our experts.

WORK IN CHUNKS TO GIVE YOUR BRAIN A REST

Michalska first tried the Pomodoro method: You work for 25 minutes, then rest for three to five minutes. After four of those blocks, you take a half-hour break. But she found herself more focussed on the timer than her work. She eventually settled into a longer period. “I try to do 45 minutes, and then I take a break.”

Michalska takes five-minute rests after her working blocks, making sure she leaves extra time for lunch. She recommended planning your week with your downtime as a priority. “I would put in the breaks first,” she said. “Put in the run, the lunch, the break. Otherwise, you’re never going to do it.”

In her schedule, she also leaves a little room for transitions between tasks, which include writing, researching, teaching, and meeting with students. She said these buffers felt counter-intuitive at first, but they help keep her on schedule. “You need a little time to shift the task, to get water, to take a walk, the mail comes, somebody calls,” she said. “I would fall behind, because something unexpected would happen when I didn’t put a little downtime in between.”

While work breaks can feel like roadblocks, you might be surprised at what happens when you give your thoughts a little room. “Your creative or subconscious mind doesn’t stop working while you’re waiting in line for coffee or you’re taking a walk around the block,” Pang said. This can lead to “those moments of insight that we’ve all had”.

AVOID WORK DURING YOUR DOWNTIME

Bonakdarpour goes for a walk during his breaks, because physical activity boosts blood flow and brain function. But a conversation with a colleague can also help, he said. Just make sure you “talk about things that don’t have anything to do with work”.

ADD MORE REST WHEN YOU OVERWORK

We all have days or weeks when deadlines pile up. But your concentration doesn’t have to suffer if you occasionally overwork. In fact, deadline crunches can sharpen your focus and help you work faster.

“A little bit of positive anxiety – I’ve got to get this done by this time – can boost brain function and productivity,” Bonakdarpour said. “But the thing is, it does take energy. The next day, you may feel tired. And you need to consider that and plan for it.”

FIGURE OUT YOUR MOST CREATIVE TIME AND PROTECT IT

You probably have a certain time of day when you’re most productive. If possible, tell your boss and colleagues you’re going to set aside those hours for focussed work, and you’ll get to your other work outside that time. “I’m not particularly effective from 1pm to 3pm,” Michalska said. “So, I just schedule all my emails at that time, when I don’t have to think that much.”

KEEP TABS ON YOUR PRODUCTIVITY

You can think about your focussed time kind of like your finances, meaning you should create a detailed list of how you spend it. “Every 15 minutes, jot down what you’re actually doing,” Michalska said. This can be tedious at first, she said, but it’ll show you how often you make a snack or check social media when you think you’re working.

My most productive days are when work feels so effortless that I fly through my breaks because I don’t feel the need for them. This state of “flow” – a term coined by Hungarian psychologist Mihaly Csikszentmihalyi – is when “you feel stretched to the edge of your abilities but not beyond them”, Pang said.

To cultivate an environment to make flow more likely, limit your distractions; research has found that it can take from 30 to 60 seconds to re-focus on a task when your attention is diverted to a second one. I set “do not disturb” time on my devices. I don’t get alerts for emails, text messages or news headlines. This kind of disconnection might seem impossible where you work. But a growing number of companies are redesigning their workdays so employees can unplug for several hours each week. It’s a simple shift, but it goes a long way in boosting worker productivity and well-being.