VERONA (AFP) – Cristian Volpato shot Roma into the top four of Serie A on Monday with a late strike and assist in a 3-1 win at Verona which moved his team above Lazio a week before the Rome derby.

Jose Mourinho’s team were level heading into the final two minutes at the Stadio Bentegodi but 18-year-old Volpato met Nemanja Matic’s low cross with a perfect first time finish to put the away side ahead.

Australia-born Volpato then ensured Roma would take three points when he slid in Stephan El Shaarawy to net a third in stoppage-time with a perfect through ball.

“The manager called me up, I hadn’t even warmed up or anything. I’m really happy to have come, score and change the match,” said a delighted Volpato after his first appearance of the campaign.

Roma are a point ahead of Lazio and Inter Milan in fourth place, with the clash against their local rivals, who will be without Ciro Immobile and suspended Sergej Milinkovic-Savic, coming up on Sunday. 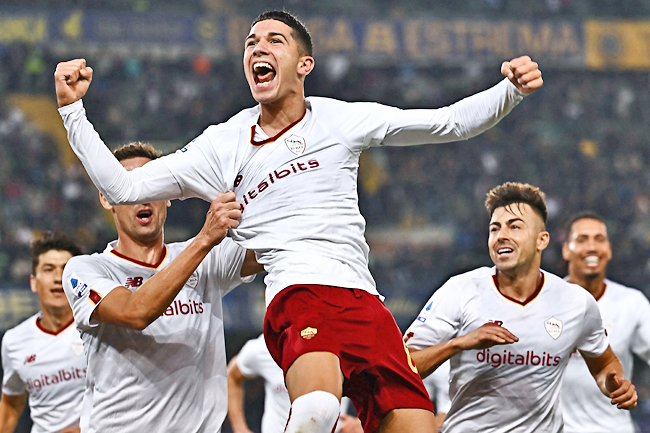 Nicolo Zaniolo tapped Roma level in first-half stoppage time after Pawel Dawidowicz was sent off for the home side nine minutes before the break.

Dawidowicz was given a straight red card for a bad foul on Zaniolo nine minutes after he had rolled ahead the hosts, who stay in the relegation zone after their seventh defeat in a row.

Mourinho insisted that he was not interested in the Rome derby, a huge event in the Italian capital which traditionally occupies fans for weeks beforehand.

Roma need to beat Ludogorets tomorrow to make the knockout rounds of the Europa League.

“When a manager starts thinking about a particular match which isn’t the upcoming one, it doesn’t usually end well,” Mourinho told DAZN.