YAHIDNE, UKRAINE (AP) – In a village in northern Ukraine that was devastated by Russian occupation only months ago, a techno party is in full swing.

In a bombed-out building, more than 200 young people have found a novel way to help rebuild their country.

The daytime “clean-up rave” in Yahidne was organised by young Ukrainians who have been using dance parties as a way to contribute to recovery efforts in the country’s north, which has suffered major damage from Russian bombardment.

Shovels in hand, the volunteers tackle the remnants of a village cultural centre that was destroyed in March by a Russian rocket strike, tossing piles of debris onto a tractor’s loader.

A DJ, his turntables mounted on a stack of ammunition boxes, spins techno and house dance music as the volunteers work.

Some even take a break from their labour to dance.

“Volunteering is my lifestyle now,” said Tania Burianova, an organiser with the Repair Together initiative.

“I like electronic music and I used to party. But now it’s wartime and we want to help, and we’re doing it with music.” 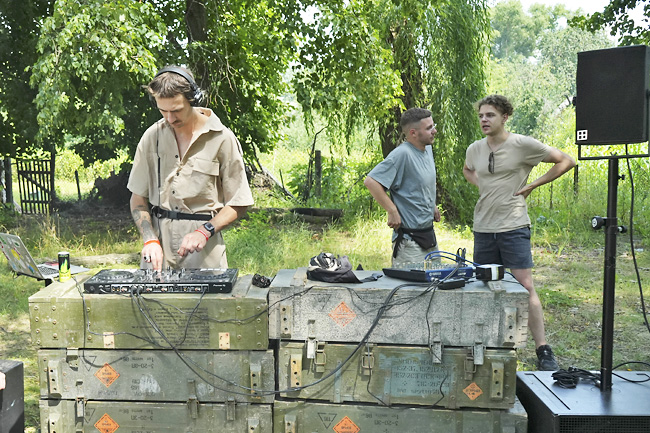 Ukraine’s vibrant club scene was brought to an abrupt halt with the Russian invasion on February 24.

Now, with a nighttime curfew in effect in Kyiv, the capital, and the threat of more Russian rocket attacks ever present, adherents of Ukraine’s party culture have sought to combine the fun and freedom of a music festival with rebuilding the country they love.

Burianova said the clean-up raves bring together those who had lost their nightclub community during the war, helping them regain a sense of normalcy and fun while contributing to the recovery of damaged towns.

“We miss (parties) and we want to come back to normal life, but our normal life now is volunteering,” Burianova, 26, told The Associated Press.

The damaged cultural centre sits on the edge of Yahidne, where nearly all of the just over 300 people in the village were confined to a basement for weeks by Russian forces during the occupation of the northern Chernihiv province.

Local resident Nina, 68, said she spent those awful weeks in the basement before the Russian troops withdrew, and that 11 people died there as a result of the poor conditions. She was grateful to see young people coming together to help the village recover.

“They already repaired our windows, doors and entrances,” Nina said of the volunteers. “We couldn’t do it ourselves with our salaries or pensions. I’m thankful that they helped us.”

Most of the volunteers were in their 20s and 30s and came from Kyiv, about two hours’ drive away. But others have come from the western city of Lviv and also nearby Chernihiv, while some foreign volunteers arrived from Portugal, the United States, Germany and elsewhere.

The clean-up at the cultural centre was the group’s eighth project so far, and they have already helped repair 15 damaged homes in the village.

They plan to expand and hold a building camp event in the nearby town of Lukashivka, where they will construct 12 houses for people whose homes have been destroyed, Burianova said.

After finishing a set, DJ Oleksandr Buchinskiy said all of the volunteers were connected by a sense of optimism and responsibility.

“These are all young people that still have a passion for life, but they feel pain and are very sad and angry because of the war,” Buchinskiy said. “But they feel a need to take part in this historical moment, and help people, and make Ukraine a better place with a smile on their faces.”